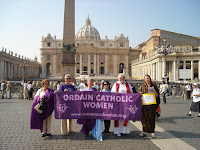 Italian and Vatican Police Confront Women Outside St. Peter's in Rome Congratulations to the Worldwide Coalition, Speaking Truth to Power for Justice for Women in the Roman Catholic Church! 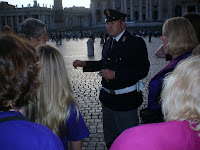 Italian, Vatican police stop and apprehend passports of Catholic representatives delivering petition
ROME, Italy - Yesterday, at 6:00 o'clock, the Italian police stopped representatives of Catholic organizations from around the world as they walked into St. Peter's Square to deliver a petition calling for the restoration of women's ordination to the diaconate. The group was holding a banner saying "Ordain Catholic Women" and handing out educational materials. A total of thirteen members of the Italian and Vatican police gathered to question the eleven representatives. After taking their materials, the Italian police demanded their passports and called the Vatican police, who sent their chief. According to a member of the Italian police, this was the first time in 15 years the chief came to question demonstrators. He did not allow them to deliver the petition to the Portone di Bronzo but said he would deliver it to the pope himself. Earlier in the day, the group brought the same banner and materials into the Square without getting stopped by the police. The representatives are in Rome during the Synod of Bishops on the Bible, calling for the full and equal participation of women in the Roman Catholic Church, including ordination as deacons, priests and bishops.
"Our peaceful action did not merit the extreme reaction of the police-sending the chief down to interrogate us while seizing our passports," stated Aisha Taylor, executive director of the Women's Ordination Conference. "However, I was not surprised. Time and again, when it comes to women's role in the Church, the Vatican overreacts and demonstrates just how fearful they are about the growing support for women's ordination. "
The Pontifical Biblical Commission determined in 1976 that there is no scriptural reason to prohibit the ordination of women. The Bible describes how women were prominent leaders in Jesus' ministry and early Christianity. In all four gospels, Mary Magdalene was the primary witness to the central event of Christianity-Christ's resurrection. The Scriptures also mention women who led small house churches, including Lydia, Phoebe, Priscilla, and Prisca.
The representatives are from Britain, Germany, Japan, the Netherlands, Portugal and the United States. They represent the millions of Catholics from around the world who support women's ordination.
###
Founded in 1975 and based in Washington, D.C., the Women's Ordination Conference is the oldest and largest national organization working solely for the ordination of women as priests, deacons, and bishops into an inclusive Catholic Church. WOC also promotes new perspectives on ordination that call for more accountability and less separation between the clergy and laity.
http://www.wtopnews.com/?nid=383&sid=1497678
By ALESSANDRA RIZZO Associated Press Writer ROME (AP) - "Catholic women seeking to become priests denounced the church's ban on female ordination as sexist and unjust, bringing their campaign close to the Vatican on Wednesday during a worldwide gathering of bishops." "...In March, the archbishop of St. Louis excommunicated three women _ two Americans and a South African _ for participating in a woman's ordination. They were part of the Roman Catholic Womenpriests movement, which began in 2002." Commentary: It is time for the Roman Catholic Church to cross the Tiber and affirm womenpriests Several hours ago, I received a call from an Associated Press Reporter in the United States in response to this article which is now both on mainstream print, tv and internet sites. All it takes is a few courageous people to change the world!! (evidence of the Spirit's movement in the church) Roman Catholic Womenpriests are building a bridge across the chasm of patriarchy to help God's people cross over from the hierarchial model of church to an open, participatory, Christ-centered, Spirit-empowered, partnership community of equals-- a model of church that resembles the Gospel equality of Jesus and the early church community tradition. As the women advocates of a renewed priestly ministry crossed the Tiber, so Roman Catholics around the world cross a new threshold from sexism rooted in discrimination to equality and justice for women in the church. It is about time that women take the rightful place as partners and equals in our beloved church. In the reports from Vatican Synod on the Word of God, I have not heard much about the example of women as leaders in early church. Have the church fathers or the few women experts even raised the topic of the role of women like Mary of Magdala, the apostle to the apostles or deacon Phoebe, or the apostle Junia as examples for all Christians including Roman Catholics of prophetic, visionary, holy women disciples? How about the women who presided at the house church eucharists? Women, like Mary Ellen Robinson, and (many other Roman Catholic Womenpriests) are following Jesus example of partnershp and community building. We have come full circle back to house churches. I think Jesus would feel right at home in our welcoming, inclusive communities.
Let's hope that the Vatican will follow the example of Jesus who chose women and men to be his disciples. It is time for the hierarchy to cross the symbolic "Tiber" from the Vatican's policies of discrimination and exclusion on a bridge from sexism to full equality for women in the Roman Catholic Church Bridget Mary Meehan Roman Catholic Womanpriest
Posted by Bridget Mary Meehan at 2:05 PM

What grounds do they have to seize passports???

I believe it is the brief of the Italian police to prevent any protest group from crossing into Vatican territory.
Perhaps they were disappointed not to be stopped when they did this the first time?
For those interested in discussing spirituality, how does this organization approach the charism of obedience?

(Save the Liturgy, Save the World)

You are sadly deluded. I will pray for you

Bridget.. I hightly recommend an appt with Fr. Amorth.. you have some demons that need to be kicked out of your mind and body.

May I just ask what the "womanpriests" organisation believes has given the Church the right to ordain women? The Church has always maintained that valid matter is necessary for a valid sacrament. What's changed?

This is a cordial request, not an attempt to attack the confused, so please answer if you have time.

Oh, one more thing, can I just ask whether the organisation subscribes to other Catholic dogmas? (transubstantiation, standing on abortion etc.) Thank you.