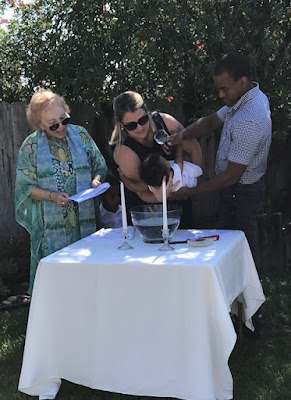 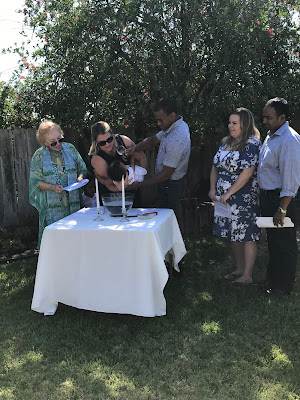 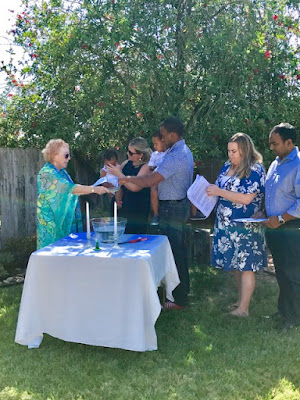 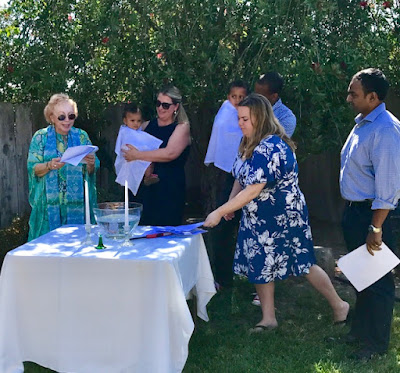 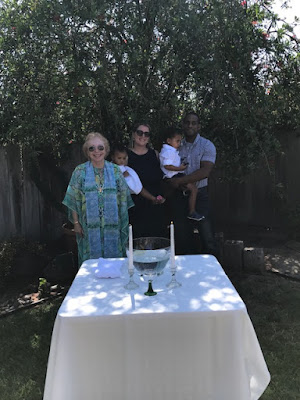 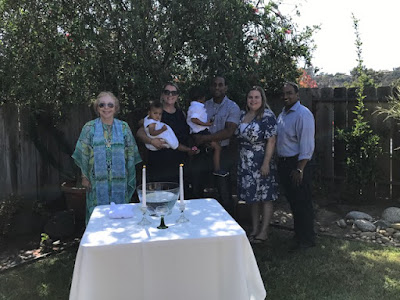 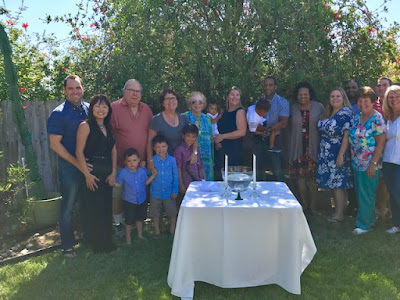 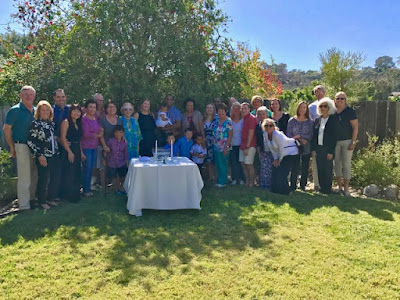 Bridget Mary: Welcome. It is with great joy that we join with Ann and Christopher to welcome their son Alexander and daughter Amelie into the Christian community.

Bridget Mary:  Let us begin our ceremony with a prayer to the Source of all Life.

O Holy One, you continually remind us that you love your creation by sending us brand new possibilities in the form of daughters and sons.  May these children grow in their understanding of your infinite love as they learn the meaning of faith through service. May they come to appreciate their responsible place as co-creators of their lives in You. Amen.
(pause)

Reception of the Child

Bridget Mary: I invite parents and godparents to stand together

Bridget Mary: (to the parents) Ann and Chris what do you ask of this Christian Community?

Ann and     We ask that our son Alexander and our daughter Amelie be welcomed into the Christian community through the sacrament of Baptism.

Bridget Mary: (to the godparents)Jackie and Neelesh, do you promise to help Ann and Christopher as they teach their children about the Source of All Life and about Jesus, our brother?

Jackie and Neelish We do.

Bridget Mary : In our ritual today, we use many sacramental symbols and signs. We continue the baptismal ritual with a blessing of the water and the oil.

Ann: O Holy One, Source of all that is, we experience your grace through sacramental signs, which tell us of your unseen presence.

Christopher:At the dawn of creation, Your Spirit breathed on the waters making them the wellspring of all holiness.

Godmother Jackie: The water of the Red Sea, through which our ancestors traveled, is a symbol of our liberation from all that holds us captive. In the waters of the Jordan River, our brother Jesus was baptized by his cousin, John, and anointed with your Spirit.

Godfather Neelesh After the resurrection, the disciples of Jesus celebrated baptism in water and the Spirit with those who answered Your call to holiness.

Ann: From age to age, oil has been used to anoint the priests, prophets, leaders and visionaries.

Bridget Mary: (to all present)  Please extend your hands in blessing the water and oil .
O Holy One, you call us to be co-creators of a world filled with blessing and abundance. As co-creators with you, we bless this water and oil as a symbol of your grace filled presence in our community.  (pause)

Do you promise to see what is good for your sisters and brothers everywhere, rejecting injustice and inequity, living with the freedom and responsibility of children of God?

Bridget Mary: Do you promise to work for the realization of God’s vision of harmony and right relations among all peoples, rejecting the idols of money, property, color, sex and position?

Bridget Mary: Do you promise to seek peace and live in peace in one human family, rejecting prejudice and half-heartedness in every form, and all barriers to unity?

Bridget Mary: Do you promise to cherish the universe, and this precious planet, working creatively to renew and safeguard the elemental sacraments of air, earth, water and fire?

Bridget Mary: Do you believe in the Holy One, the Source of all life, in Jesus, our brother who loved and lived among us so that all might live with abundant fullness; in the breath of the Holy One’s center, the Spirit who continues the work of forgiveness and reconciliation, birthing and blessing, challenge and hope, so that together we can continue the work of creation?

Bridget Mary: Parents and godparents, please bring the children to the baptismal font.

Bridget Mary: (as parents anoint each child’s head))
Alexander/ Amelie you were created in love and welcomed to life with love. We anoint you with this oil in recognition that human love is sacred, that you are sacred.

Bridget Mary: (as Godmother Jackie presents stoles) Alexander/Amelie, we present you with this stole. May it remind you that you carry in the depths of your being the Spirit of Life and Love itself.

Bridget Mary: (as Godfather lights each child’s candle from Parent’s candle)Alexander/Amelia, may this candle remind you of Jesus, who opened peoples’ minds and hearts to see the “light” of God’s presence within them.

Bridget Mary: Please stand as we pray a blessing for our newly baptized children
Cele
Ann: May the Spirit of Air inspire you to see the world through fresh, open eyes, to be a soulful visionary, and to lend optimism and hope to all you encounter.

Christopher:  May the Spirit of Fire transform all you touch with Light, and grant you courage and protection as you go forth in your Divine Life Mission.

Godmother Jackie: May the Spirit of Water bring you purity in body, mind, and spirit to nurture you as you nurture others, to support your inner knowing and intuition as you navigate the seen and unseen worlds.

Godfather: May the Spirit of Earth grant you wisdom as you seek Divine Truth, Integrity of thought and action, and fortify you with the strength you need to shine your Divine Light in the physical world as only you can.

Bridget Mary: And May you always remember, the Source of All lives as a Divine Spark within you to inspire, renew, and uplift you and all that you meet along your journey.  Amen. (This blessing was written by Mary Anne Nolan Gianino for baptism of daughter Sofia)
Presentation of Child to Community
Bridget Mary: (Parents and Godparents hold children up)) It is with great joy that we welcome Alexander and Amelie to the Christian Community and extended family.

Posted by Bridget Mary Meehan at 10:05 PM No comments:

Befriended by the Light by Eileen Knoff


Befriended by the Light 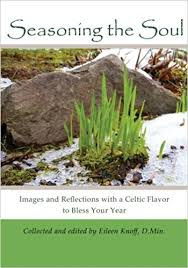 as does the presence of anam cara;
May autumn’s glow befriend you
body and soul.

May this light guide you to the Divine Light
Who will be your Anam Cara,
drawing forth your own radiance,
casting shadows that you do not fear
to look upon with understanding