https://www.gazettetimes.com/priest-urges-vatican-family-conference-to-welcome-gays/article_80d66785-7d2f-50f6-a89d-e85395f1bc99.html
DUBLIN (AP) — "One of the Catholic Church's leading advocates for gays told a Vatican-sponsored conference Thursday that LGBT Catholics deserve to be loved, listened to and welcomed by the church and not ostracized and condemned.
The Rev. James Martin received a standing ovation after his presentation on welcoming LGBT Catholics at the church's World Meeting of Families, which Pope Francis will be closing out this weekend.
Martin told the audience that LGBT Catholics "have often been treated like lepers by the church" despite Christ's example of welcoming and loving all those on the margins of society.
"By not welcoming, by excluding LGBT Catholics, the church is falling short of its call to being God's family," Martin said. He specifically urged Catholics to not focus on gays and their sexual morality while giving the sex lives and marital status of straight Catholics a pass.
Martin didn't refer to the new scandals and took no questions, sticking instead to what Catholics can do in their own parishes to make sure gays and their families feel welcomed and loved. He urged them to remember gays are Catholic, that they don't choose their orientation and have gifts to offer the church.
Catholic teaching calls for gays to be treated with dignity and respect, but considers homosexual acts "intrinsically disordered."
"Many if not most LGBT Catholics have been deeply wounded by our church," Martin said. "Apologize to them."
He stressed that he was speaking to church ministers, especially. "You can apologize. It doesn't solve everything, but it's a start."
Posted by Bridget Mary Meehan at 9:37 PM 2 comments:


My Response: A word of thanks to Marie Collins, a woman of courage and integrity, who has worked hard to effect change in the Vatican. Catholics worldwide support accountability. So must Pope Francis, beginning with the Vatican and the bishops . The credibility of Catholicism is at stake. Otherwise, it is time for a worldwide boycott of funds.  This may drive the message home!
Bridget Mary Meehan ARCWP, https://arcwp.org, sofiabmm@aol.com. 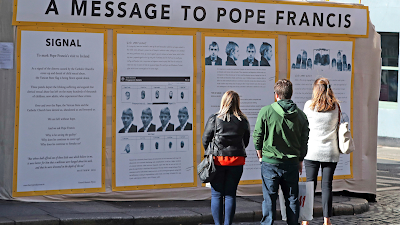 Marie Collins, a former member of Pope Francis' abuse advisory board, urged Catholic families attending the Dublin conference to ask why the pope scrapped such a structure — a proposed Vatican accountability tribunal — several years ago.

Collins was the headline speaker at a panel discussion on keeping children safe from pedophiles at the World Meeting of Families, a once-every-three-year Vatican-sponsored rally meant to encourage and energize Catholic families. Francis arrives Saturday in Dublin to close out the conference with a Mass on Sunday in Dublin's Phoenix Park.

While the sex abuse crisis was always going to cloud Francis' trip, given Ireland's devastating history of abuse and cover-up, new revelations in the U.S. of misconduct and cover-up by the U.S. hierarchy have ensured that Francis' trip will be dominated by the issue.

Cardinal Sean O'Malley, Francis' top abuse adviser, had been expected to head the Dublin safeguarding discussion Friday but stayed home due to what he called "serious pastoral needs" in Boston. O'Malley launched an investigation into his diocesan seminary, and removed its rector, after reports of misconduct went public.

It's the third seminary — including Philadelphia and Seton Hall, New Jersey — that are now under church investigation because of reports of sexual misconduct and possible abuse.

In a letter read out to the conference, O'Malley apologized for not being there in person but made clear he believed that protecting children was the single most important issue facing the Catholic Church today.

"All endeavors at evangelization and other great works will be dependent upon our ability to own our crimes and failings and to make the protection of children and vulnerable adults our No. 1 priority," his message read.

Collins, who resigned in frustration from O'Malley's panel last year, was more direct in demanding accountability for abusers and those in the church hierarchy who covered up for them, including at the Vatican.

"Anyone in the Vatican who would stand in the way of proper protection of children should be accountable as well," she said. "This accountability must have strong sanctions for the guilty: Dismissal from their post, removal of their titles and privileges and if necessary, removal from the clergy entirely."

"The actions of the church do not match the words, and they are in fact totally the opposite," Collins said to applause.