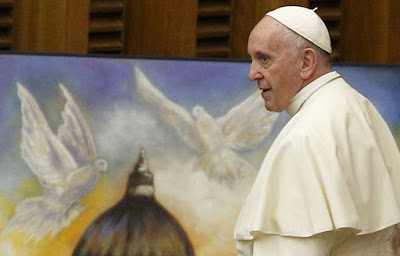 VATICAN CITY (AP) — Pope Francis vowed Monday that “no effort must be spared” to root out priestly sex abuse and cover-up from the Catholic Church, but gave no indication that he would take action to sanction complicit bishops or end the Vatican culture of secrecy that has allowed the crisis to fester.
In a letter to Catholics worldwide following damning new revelations of misconduct in the U.S., Francis sought to project a get-tough response to the perpetrators and a compassionate shoulder for victims ahead of a fraught trip to Ireland this weekend. Nicole Winfield, Associated Press

Bridget Mary Meehan ARCWP: In response to the horrific abuse of more than 1000 children by 300 priests, Pope Francis names clericalism as a cause of the sexual abuse crisis,  but fails to take steps to dismantle it by creating a new model of priestly ministry, that is egalitarian and one - equals in the community of the baptized- inclusive, accountable, transparent, and includes women priests. This apology, while heartfelt, puts a band-aid on a deadly wound that threatens the life of the Church. He should fire all the U.S. bishops who covered up abuse as a first step forward as an act of real penance. While no amount of penance will heal the broken lives that have been destroyed by the cover-up of bishops for decades,  it is time for serious reform of structures that have protected the bishops and the Vatican from accountability.  Catholic men and women -mothers and fathers,  grandmothers and grandfathers aunts and uncles, sisters and brothers are ready to lead the way toward healing in a community- empowered community of equals full of  compassion and justice- seeking for all the survivors. What we need now is for Catholics to rise up to demand a new structure that places women and men in  decision-making roles in all dioceses and in the Vatican with the responsibility of firing bishops who have covered-up abuse and engaged in criminal behavior. This includes women priests and married priests serving as equals with all members of the community of the Baptized.  https;//arcwp.org, sofiabmm@aol.com, 703-505-0004

The New York Times reported that the  Vatican in a statement said "it felt shame and sorrow over the findings that more than 1,000 children had been abused by hundreds of priests over decades while bishops covered up their crimes. The abuses described in the report are criminal and morally reprehensible,”
On August 14th the attorney general of Pennsylvania released a 1,300-page report documenting the abuse of more than 1,000 children by 300-plus priests over 70 years, with the number of victims believed to be even higher.
The Association of Roman Catholic Women Priests (ARCWP) joins theologians, educators and leaders in our Church calling for the resignation of the bishops who have covered up decades of horrific sexual abuse of children. It is time to embrace a whole new healthy model of egalitarian ministry that is accountable and transparent.
“If we had women as equals and partners, women ordained in the Catholic church, the church would not be in this mess, because we would have parents who would minister and who would make sure children are protected,” said Bishop Bridget Mary Meehan, a former nun.

“Women priests would not cover up abuse of our children,” said Mary Theresa Streck, a former nun, widow, and co-founder with Bridget Mary Meehan of People’s Catholic Seminary. “We would work for justice for our children as we are working for justice for women in our church.”

Dotty Shugrue: “This is not about the ‘sexual orientation or identity of male priests. One of the many gifts women offer the Church is their natural intuitive gifts, their sense of something going awry, that motherly instinct to protect the children entrusted to their care. Refusing to have women as equal partners in all aspects of ministry and leadership in the Church continues to create a breach of the heart. Women offer a perspective that is essential. It is time to recognize Roman Catholic Women priests as equal partners.”

Jim Marsh: “The sexual abuse of minor children and others by Catholic clergy at all levels of our church is beyond horrific! As a healthy gay male who is an out, loud and proud gay Catholic priest with the Association of Roman Catholic Women Priests, I strongly state that sexual abuse is never about sexual orientation. In addition to implementing transparency in dealing with this crisis at all levels, I also see a strong need for our Church to develop a theology of sexuality and sex that is wholesome, healthy, and holy regardless of where one may fall on the continuum of sexuality.  The notion of male-female complementarity is not wholesome and healthy because it labels anyone and everything that doesn’t fit into the box as disordered and sinful. We must see sexuality and its expression within the context of blessing— ‘the Holy One desires a fitting companion for all the earth creatures … it is not good to be alone.’ [Genesis]

Just as we need to listen to the stories of those abused by Catholic clergy, we also need to really listen to the lived experiences of gay and lesbian families who are raising children and recognize that these families are holy and good! Next week, the Pope will be attending the World Meeting of Families in Ireland. It’s unfortunate that so many people have been excluded from participating in this gathering, such as women priests and LGBTQI persons.”

Diane Dougherty cites theologian Sister Ilia Delio on the need for structural change from a top-down clerical model to a community of equals model:
"In the past clerical power came from the laity, the “unlettered,” who submitted to the authority of the priest, as if submitting to the power of God. In the future ecclesial power will come from the community of gathered persons who will be set free by the power of God within; who will resist patriarchy in all forms, who will rise up in a new church concelebrated by women and men, inclusive of all gender types, all races, all languages, all colors, all broken and divorced hearts, all those in search of healing, mercy and compassion; a church that will empower the present for a new future of life. “The days are coming,” says the Lord, “when I will raise up a new church which will not deceive as a finished church but as the unfolding of My Life in an unfinished universe. For my work is loving the world; the Living Christ is still coming to be.”

Pope: No effort spared to fight abuse, but offers no detailsPope: No effort spared to fight abuse, but offers no detailsVATICAN CITY (AP) — Pope Francis vowed Monday that “no effort must be spared” to root out priestly sex abuse and cover-up from the Catholic Church, but gave no indication that he would take action to sanction complicind the Vatican culture of secrecy that has allowed the crisis to festerAssociated Press- Nicole "In a letter to Catholics worldwide following damning new revelations of misconduct in the U.S., Francis sought to project a get-tough response to the perpetrators ancompassionate shoulder for victims ahead of a fraught trip to Ireland this weekend." NicoROME — Pope Francis has acknowledged that the Catholic Church "did not act in a timely matter" to protect children from sexually abusive priests over a period of decades, saying in a new letter to members of the Catholic faith around the world that the church "abandoned" minors to those who would abuse them.

Posted by Bridget Mary Meehan at 8:41 AM