Mass-goers in Dublin and Cork on their relationship with God, Catholicism and the Pope 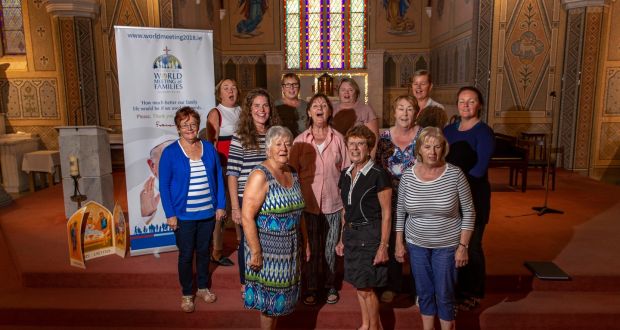 The choir of St John the Baptist Catholic church in Killeagh, Co Cork, which will sing at the World Meeting of Families. Photograph: Michael Mac Sweeney/Provision

Share to FacebookShare to TwitterShare to Email AppShare to Pinterest
At Mass in St Matthew’s church in Ballyfermot, Dublin, Fr Joe McDonald is criticising homophobia within the church. He jokes about people who have asked why he hasn’t been “sanctioned”, and he points them towards the church of Vatican II and the church of Jesus. These values are there, he says. He leans against the dais casually as he speaks, and his voice goes from quiet to loud in his Falls Road accent.
The low-lying 1970s church is around three-quarters full, largely of people over 50, although there are a few young families, some from the local Kerala Indian community. In the doorway a noticeboard advertises pilgrimages to Lourdes and Knock, and a concert in aid of the Peter McVerry Trust. There are also stacks of Fr Joe’s newsletter Rumblings from the Bunker. It is the Seventeenth Sunday in Ordinary Time.
After Mass he greets people at the door of the church. An older man gently chides him for reading too quickly during parts of the service. A younger man tells him about his crucifix tattoo – Father Joe mentioned a project collating examples of religious body art – and makes as though to remove his shirt. Father Joe laughs. “You don’t have to show me!”
He tells me about holy contemplation which he loves (“a divine waste of time”). He talks about his boxer dog. He talks about lack of accountability in the church, and how Mary McAleese frightens “old male crusty celibates” .
A former Christian Brother who became a priest in later life after a bereavement and crisis of faith, Fr Joe has written a book called Why the Irish Church Deserves to Die, and he revels in theological discussion with his parishioners.
Some people come to his house every day for “a bowl of soup, a prayer, a medal, a blessing, a chat… People around here have suffered extraordinary. I mean, they are exceptional people. If you look at the beatification and canonisation of characters like Matt Talbot or Edmund Rice… one of the things the church examines is ‘did they display heroic virtue?’ I see heroic virtue here every day. They’ll never be beatified or canonised.

“A woman with 14 children who’s buried half of them, a man and woman in their 70s rearing their grandchildren because their parents are dead – that’s heroic virtue.”
Moya Doyle, the parish secretary or, as she describes it, “parish gopher”, introduces me to some parishioners who “have been excommunicated”. She’s joking. Yvonne Foster, who is 60 and a founding member of the folk group, now goes to Mass three times a week and relishes the sense of community it brings her. “You go inside here and have a cup of tea and a bit of a yap. There’s a good bit of craic afterwards, and I met people I wouldn’t have met.”
Fr Joe, for the record, does sermons that are just as expansive on weekdays. “I’m not behind the door saying it to him,” says Yvonne, miming tapping her watch.
What’s her favourite bit of Mass?
“Receiving holy communion.”
“I envy that,” says 46-year-old Tara Fulham, who lapsed for years and is only recently regaining a faith. “I was a teenager when the scandals started to hit, and I remember the first one was Bishop Eamonn Casey and our parish priest stood up and roared at us all not to read the papers... I remember thinking ‘you can’t treat people like this. We need to be able to talk about it’.”
She came back to the church after witnessing the kind way Fr Joe ministered to her father-in-law at the end of his life. “We talked about it at home, and it wasn’t a very deep conversation, just ‘will we go back?’”
Now she loves having 45 minutes a week when the kids don’t have their heads in a screen. She laughs. “I have to be honest, if I come in on a Sunday and it’s not Fr Joe I go ‘oh God, I wonder what this fella will be like’.”
Her faith isn’t a fixed thing, she says. “I often wondering am I praying the right way. I yap away as if it’s a friend, ‘How are you keeping’?”
Michael O’Flanagan, a student at King’s Inns, is an unusually young Mass-goer at 25. “My friends do think it’s unusual,” he says. He didn’t go as a child, though his family did have religious faith. So what brought him here?
“Father Joe is a big factor... He doesn’t come across as doctrinal or judgmental. It’s interesting and relevant, and he relates everyday issues back to the gospel.”

Declan Graham, who helps with the church’s finances (“I drive a 10-year-old car in case anyone was asking”), had a “road to Emmaus moment when teaching fellows to drive buses for Dublin Bus…One of them was an African Christian, one of them was an African Muslim, and one of them was an East European Christian – and two of them started talking about St Peter,… and the next thing the three of them had this in-depth conversation, quite sensible, quite logical, really in-depth about faith and what they believed and what the bible said, and I thought ‘wait a minute, Irish Catholics are meant to be the best in the world, and I don’t know what they’re talking about…I really need to look at this’.”
He took a night class in theology, and found himself reconnecting to Catholicism in a completely different way. “I don’t take everything the church says as 100 per cent Gospel,” he says.
Are Catholics allowed draw their own conclusions on theology? “You have your faith, but you can question things and critique things, and I think Father Joe
encourages that,” says Michael.
“He’s the type of man you can go up to and say, ‘for God’s sake, what were you talking about there’?” says Tara.
“You can make your own mind on things,” says Declan a little later. “You can vote ‘yes’ on the abortion referendum. Why? Because you can talk to God about it and make up your own mind.”
But the congregation is dwindling.
“I don’t see my peer group here,” says Tara. “And if there’s a wedding it’s like the Muppet Show, people standing up, sitting down, nobody knows what to do… I talk to my friends and say ‘at those moments of crisis what do you think happens? What do you believe happens when we go’?”
What does she believe? “I couldn’t fathom that there’s nothing beyond, that when we go we go…There has to be something more.”
Posted by Bridget Mary Meehan at 12:51 PM