A New Kind of Catholic Emerges Out of the Church's Tainted Shadow Following Pennsylvania Sex Abuse Report For many Roman Catholics, separating their religious faith from the governing organization has been a daily practice long before a Pennsylvania grand jury documented decades of sexual abuse by hundreds of clergy members, Dignity, A Community of LGBT Catholics Worship Led by Kathleen Gibbons Schuck RCWP By Alicia Victoria Lozano

"A new generation of Catholics is stepping outside the church's tainted shadow and creating a modern community that, they say, better reflects the world today.This new generation of believers worship outside the confines of an antiquated and draconian institution that is out to protect itself, they say. This has been a daily practice for many long before a Pennsylvania grand jury report exposed decades of sexual abuse by hundreds of clergy members throughout the state.“We’ve always had an antagonistic or non-relationship with the bishops,” Michael Rocks, president of Dignity Philadelphia, said. “We don’t trust them to police themselves.”Founded in 1973, Dignity is a community of LGBT Catholics who worship in the basement of St. Luke’s Episcopal Church in Center City. Their services are frequently led by Kathleen Gibbons Schuck, a woman who was ordained as a priest in 2015. 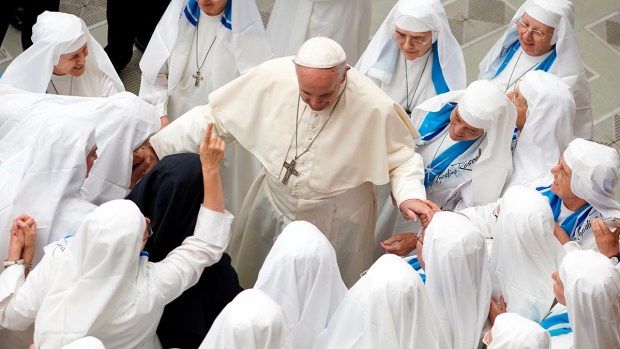 Andrew Medichini/AP
Schuck is one of more than 200 Roman Catholic Women Priests around the world. Their unique sisterhood dates back to 2002 when a group of radical male bishops took it upon themselves to ordain seven women on the Danube River. While the Vatican does not recognize these ministers, Schuck and her sisters remained undeterred.
“We live below the radar,” she said. “It’s all about community. I believe at the deepest level that’s what Jesus calls us all to.”
Despite their rejection of the traditional Catholic Church, both Rocks and Schuck consider themselves faithful. Rocks is a gay man, and Schuck is married to a man and has a college-aged daughter.
Both church leaders are drawn to Catholicism’s sense of community.
“I have found that at times of real trauma, grief, the support of a community has made a difference and helped me get through challenging situations,” Schuck said.
But her 21-year-old daughter remains cautious, if not cynical, regarding the church her mother embraces. When the grand jury report came out last week, Schuck’s daughter told her that the news merely exposed “a scam for what it really is.” 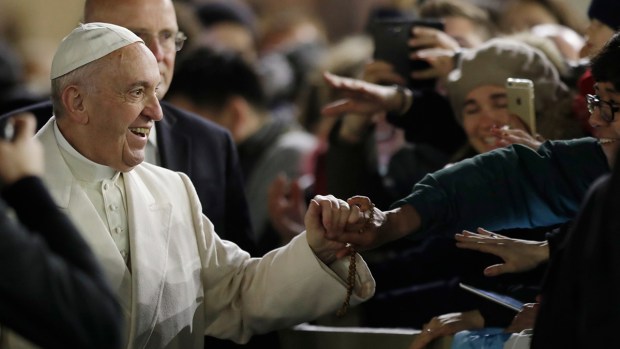 Pope Francis reportedly told the president of the Episcopal Commission for the Amazon in March 2017 that he would allow the Latin Church bishops in the Amazon region at a 2019 synod to debate whether they should ordain married men to the priesthood. The Catholic Church ordains married men in the 23 Eastern Catholic Churches. The Latin Church headed...

Read more
(Published Friday, March 10, 2017)
Schuck’s daughter is not alone in her mistrust of organized religion. More than 30 percent of millennials consider themselves to be religiously unaffiliated, according to a 2014 study by the Pew Research Center. Even older Americans are increasingly calling themselves atheist or agnostic - almost a quarter of the U.S. population now considers itself unaffiliated compared to just 16 percent in 2007.
“Whereas it is life-giving and energizing for me, it is not for [my daughter],” Schuck said.
The Pennsylvania grand jury report forced many Catholics to confront painful realities about the church, but it has not necessarily shaken their faith.
Pope Francis issued a letter to believers around the world Monday condemning the crime of priestly sexual abuse and demanding accountability. He begged forgiveness for the pain suffered by victims and said lay Catholics must be involved in any effort to root out abuse and cover-up.
His words resonated throughout the world, even drawing the praise of Pennsylvania Attorney General Josh Shapiro, who spearheaded the grand jury investigation.
The pope’s words also helped to galvanize a new generation of Catholics who want to see the church modernize.
“I have known and have met priests that are genuinely good,” a 23-year-old La Salle University student told NBC10. “You can’t judge one person by what another person has done.”
The Philadelphia native asked that her name not be used because her family is active within the local church community. She admits that of her friends, she is the only one who openly practices Catholicism. The others “have fallen off,” she said. They are too busy with school and work to attend mass, and they don’t necessarily understand supporting an organization accused of so much wrongdoing.
“I was taught church is the people, not the building,” she said.
Posted by Bridget Mary Meehan at 7:49 PM