Be the change you want to see in the Catholic Church. Come celebrate at an inclusive, public, open-air Mass led by a Roman Catholic woman priest on Sunday, October 13. The triangle park is located on “Mass” Ave. near the Naval Observatory, just two blocks up the hill from the Vatican Embassy.
Break bread with one of over 250 Catholic women around the world who have become priests as part of an underground movement launched in 2002, with the secret ordination of seven women on the Danube River in Germany (conducted by a male bishop). Some of the women are married, some are single, many are mothers and grandmothers, and all are prepared in theology, liturgy, and sacraments in the Catholic tradition. There are now eight Roman Catholic women priests in the DC-Baltimore-Annapolis region who hold weekly Mass. Breaking the rules? More like living into the always-changing Church, and following their calling in an act of prophetic obedience.
Behold, I am making something new. (Isaiah 43:19) Be a part of history by witnessing the simple goodness of inclusive Catholic ordination.
The first Mass On Mass took place on Mother’s Day/Vocations Sunday in May 2019. Both events are in solidarity with Maria 2.0, a Catholic women’s strike in Germany to help bring about serious reform.
All are encouraged to wear white. Rain or shine. Bring a friend, a lawn chair or blanket, and a snack to share afterwards if you’d like.
Mass on Mass is being organized by WHIMM (Washington Home Inclusive Monthly Mass), a Roman Catholic movement begun in February 2019 by Washington, DC-area neighbors to help renew the Church by experiencing a new model of ordained ministry. Once a month, we hold a home Mass led by a Roman Catholic Woman Priest from the Baltimore-Annapolis-Washington Living Water Inclusive Catholic Community. The hope is to build something better so we can see it and flourish in it. The gatherings are inclusive, and all are welcome at the table to celebrate God’s creation.
English | español
Posted by Bridget Mary Meehan at 12:35 PM No comments: Links to this post

Retreat on St. Hildegard of Bingen with Dr. Shanon Sterringer

We are looking forward to tomorrow's retreat on Hildegard of Bingen with Dr. Shanon Sterringer in Albany, New York. If you have not registered, you can join us virtually. More information to come. You can watch this film on amazon prime.

Posted by Bridget Mary Meehan at 9:15 AM No comments: Links to this post

As we leave Ireland today, we go with the beauty of this land and the love and support of our new Friends Of ARCWP

https://youtu.be/f11FYXh99Xs
Posted by Bridget Mary Meehan at 12:06 AM No comments: Links to this post

https://www.irishexaminer.com/breakingnews/views/ourview/diocese-backs-women-priests-stark-choices-for-catholicism-952365.html
The collapse in vocations is so dramatic that the diocese has started a process to reflect on a vote that indicated that 85% of Catholics felt priests should be allowed to marry, while 81% supported priests who had married resuming ministry. The survey found that 80% backed women being ordained to the diaconate and, in opposition to the Vatican, 69% said women should be ordained.
Posted by Bridget Mary Meehan at 4:44 AM No comments: Links to this post

We gather today in holy community, a living embodiment of faith that is both comforting and challenging. Ours is a faith in a Holy One who nurtures us toward a gentle heart and nudges us toward a loving conscience.

We seek a dwelling place for a tender peace in our sometimes aching hearts. We yearn for a steady balance in our behaviors. We stretch to be spiritually agile and always thankful for moments of exuberance as well as moments of crushing pain, and we do this with the help of the Spirit of God.

We gather for liturgy as companions in holiness, reassured that Jesus came to prepare us for balance in the face of every extreme, that we might become fully and completely and beautifully human, living this day and every day as our best selves in peace and in possibility. Amen.

Opening Song: We are Called by David Haas

First Reading by Roberto Goizueta from Christ Our Companion

The most convincing testament to the truth of the Christian faith are the persons whose everyday lives have embodied that faith, from the time of Christ to the present --- not just those saints officially recognized by the church but the millions more who toil in the obscurity of their homes, neighborhoods, and communities.

Each of us knows who these holy ones are, for they have touched our lives, befriended us, nurtured us, challenged us, inspired us. More than an abstract principle, dogma or theological proposition, the concrete lives of these exemplary Christians are what have attracted us to Christ.

Their lives and testimonies witness to the credibility of the Christian way. It is not the rationality of the theological arguments that will convince us of the truth of our faith but the beauty of those lives in which is faith is incarnated and made viable and palpable.

These are the inspired words of Roberto Goizueta and we affirm them by saying, Amen. 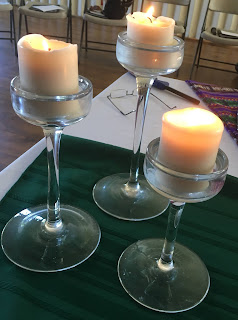 A Reading from the Gospel attributed to Luke:

Jesus told the disciples a parable: There was a very wealthy landowner who, having received reports of a steward squandering the property, called the steward in and asked, “What is this I hear about you? Give a full accounting of all your management to date, because you cannot be my steward any longer.”

The steward thought. “What should I do now? My boss is taking away my job. I’m not strong enough to dig and I’m ashamed to beg. I know what I will do so that when I am dismissed as steward, people will welcome me into their homes.

Summoning each of the landowner’s debtors one by one, the steward asked the first. “How much do you owe my employer?”

A hundred jugs of olive oil.”

The steward said, “Take your bill, sit down quickly, and make it fifty.”

Then, the steward asked the second debtor, “And how much do you owe?”

“A hundred containers of wheat.”

The steward said, “Take your bill and make it eighty.”

Upon hearing of this, the owner commended the dishonest steward because he had acted shrewdly. No servant can serve two leaders. You will hate the one and love the other, or be devoted to the one and despise the other. You cannot serve both God and wealth.

These are the inspired words of our brother Luke and we affirm them by saying, Amen. 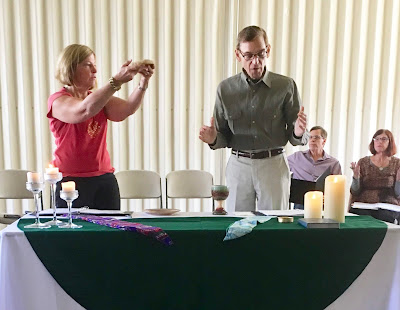 Very early in the research that Lynn and I did to prepare this morning’s homily starter, we learned that today’s gospel is viewed by nearly all scholars as one of the most difficult to interpret. And I think we can all see why this might be the case. At first glance, it seems that a landowner- who is a person of great wealth-- has fired the person who is the steward of his property due to dishonesty. When the steward attempts to limit the negative consequences of his own actions, he takes further unethical action and is praised by the landowner for “acting shrewdly.” Based on all this, you won’t be surprised to know that Lynn and I considered not using this gospel reading at all. But one of the important tasks for those in this inclusive progressive community is to “break open” the gospels and make an effort to uncover Jesus’ true message so that we can live it with greater fidelity. And with continued reading, contemplation and discussion, Lynn and I began to see other possibilities of what occurred in this parable and how this could lead to some meaningful themes in our daily lives.

Richard Rohr states that we find God through either great love or great suffering. The steward, facing an impending crisis, realized that in order to survive he would need to rely on the kindness of others, and in this case the kindness of those in a social station that was considered less than his own. When faced with the prospect of lacking money and a place to live, he realized the value of relationships. He experienced a reversal of status—a theme that is so common in Luke: the first shall be last, the powerful are defeated and the lowly rise. In his moment of crisis, the steward created a new set of relationships, based not on money and debts but instead based on equality and reciprocity. So rather than being the dishonest steward, as he is so often called, perhaps he is better viewed as the resourceful steward or, better yet, the transformed steward. Yes, it took a crisis to get him there, but he changed the order of things in his life, just as Jesus changes the order of things for each of us.

And the first reading reminds us of who the steward came to value in his life. The people who he would rely on for the kindness he needed were not members of the religious hierarchy or those focused on dogma and rules, but rather ordinary people “who toil in the obscurity of their homes, neighborhoods, and communities.” How often in the gospels have we been reminded of the saving power of those who have been considered “less than” by society. And how often has each of us been reminded of the true message of the gospel by the quiet, unassuming kindness of a friend.

Finally, the gospel ends with a warning that we “cannot serve both God and wealth” and Lynn and I would like to emphasis that money itself is not evil. Much good can be done with money to help others and live the gospel message. This community has certainly demonstrated that through your generosity to so many needs, both here in our local community and for people far from home. But as Lynn so succinctly put it to me, “Money is a terrible master but a great servant.” True enrichment comes to us by engaging the divine in all people and it is up to each of us to find that balance between having the money we need to care for ourselves and those we love and giving to those who live, day to day, in a state of impending crisis. 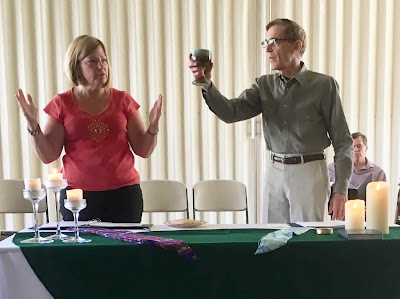 Communion song: Beauty of the Dancer by Sara Thomsen
https://youtu.be/Lax7fxdOnVU

We pass the bread and wine with the words: "You are the Holy One of God."

Posted by Bridget Mary Meehan at 3:44 PM No comments: Links to this post