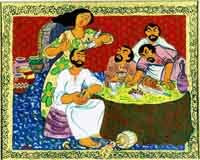 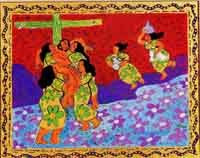 Sophie and the women of Jerusalem 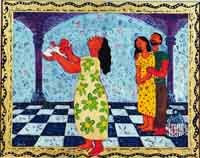 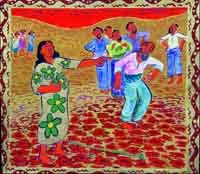 The images above come to our blog from DINA CORMICK, feminist artist and visual theologian, who was born in Nkana, Zambia in 1942. Graduated with honours in Fine Art from Durban University of Technology in 1965, and in 1993 graduated cum laude as a "Mistress" of Feminist Theological Ethics from University of South Africa, after critically discussing the manner in which women have been imaged by the Christian Church. Over the years, Dina has been actively involved in several women's movements for change for example, The Black Sash; The Christian Womens' Movement (CWM); The Institute of Contextual Theology's Womens' Kairos;The Circle for Concerned African Women Theologians; Interfaith Women Against Abuse (IWAA); Sisters Of Faith In Action (SOFIA) and most recently The Feminist Party, birthed at AWID Forum in Cape Town November 2008. Significantly the most contentious movement was WOZA (Women's Ordination South Africa) which Dina co-founded with Velisizwe Mkhwanazi in 1996. Dina was personally demonized by the Catholic Priests Organisation with full consent of the local hierarchy. "I not only received more hate-mail and abusive telephone calls than during the apartheid era as a Black Sash, but I lost my 'bread and butter' art commissions from the Church."

However, apart from the above, since 1978 she has worked as free-lance artist from her studio in Durban. Her commissioned artworks which, include wood sculptures, mosaic and ceramic panels, book illustrations and posters can be found widely distributed through Southern Africa in ecumenical church institutions, as well as in numerous grassroot and socio-political organizations. Her particular concerns and interests lie in the didactic importance of art. "I feel very strongly that art has an important formative role to play in our lives, especially toward challenging the ethics of our society. I am committed to a reclaiming and enkindling of the spiritual resources of women through a visual theology." From 1986 Cormick's artworks have predominantly focused on women.

Using images from the "Heroic Womens Series" of paintings and her current artworks, "Icons In celebration of Women" to be exhibited at CTA 2009, well known South African artist Dina Cormick will speak about her impulse to create positive, affirming and challenging woman-imagery. "I call the women I image "heroines" – they could be called great ancestors or honoured foremothers. The main focus has always been to celebrate and honor the stories within each woman. The Heroic Women Series began in 1987 as a visual celebration of the women in the Scriptures, proclaiming and naming the hitherto nameless and neglected. Subsequent series have reclaimed and celebrated the wise and courageous women of history, especially the women who struggled an often painful spiritual journey for justice and equality.

For example a motivating force for the South African Heroine series was a real concern that in the surge towards economic gender equality, many of our young women are unaware of the depth of contribution made by women against the oppressive patriarchal regime of apartheid. We have not honoured them enough - women like Lilian Ngoyi, Francis Baard, Jabu Ndlovu, Victoria Mxenge, and Lydia Kompe… I believe that women need images to empower, to affirm and simply to celebrate womenhood - the feminine divine, WiseWomen & EveryWoman.
Posted by Bridget Mary Meehan at 6:07 PM