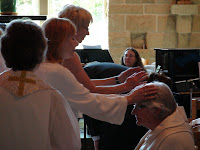 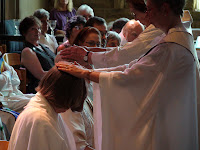 On Divine Mercy Sunday, God granted the constant prayer of the Church for vocations, in a way that will bring a great harvest of priests to the Church in America.

For the first time in the United States, four women were ordained as Roman Catholic bishops. The ordination took place on April 19, 2009 in a Catholic chapel in California, before about 100 people.

The four new women bishops are part of the Roman Catholic Womenpriests movement (RCWP). They were called to be ordained bishop by the women priests in their respective regions.

The ordinands are Bishops Joan Mary Clark Houk of Pittsburgh for the Great Waters (central) Region, Andrea Michele Johnson of Annapolis for the eastern region, Bridget Mary Meehan of Virginia and Sarasota for the southern region, and Maria Regina Nicolosi of Red Wing, Minnesota for the upper midwest region. A fifth woman, Dana Reynolds of California, was previously ordained a Catholic bishop for the western region, in 2008 in Europe.

Bishop Bridget Mary Meehan is a member of the Sisters for Christian Community. The other new women bishops have been married for more than forty years and have adult children. Bishop Regina Nicolosi's husband, Charles, is a retired, permanent deacon for the archdiocese of St. Paul and Minneapolis. All four women have degrees in Catholic theology and extensive pastoral experience.

There were three ordaining bishops, which is a requirement for the ordination of a bishop. Bishop Patricia Fresen, now living in Germany, was a Dominican sister for forty years in South Africa and taught in the Catholic seminary in Pretoria. Bishop Ida Raming is a German theologian. Bishop Christine Mayr-Lumetzberger from Austria was one of the founders of the Roman Catholic Womenpriests movement. She and Bishop Ida Raming were two of the first seven women priests, ordained on a boat on the Danube in 2002. Two other women who were ordained priests with the Danube 7 were also in attendance at the California ordination of bishops, Iris Müller from Germany and Dagmar Celeste, the former first lady of Ohio.

The ordaining bishops, along with several other European women, received their own ordinations as bishops, in full apostolic succession, from three unnamed male, Roman Catholic bishops who are in full communion with Rome. The male bishops believed that the time has come for women's ordination. They ordained several women bishops in recent years so that the movement could continue with full Catholic sacramental ordinations but without the clandestine participation of the male bishops.

A history of the RCWP movement and personal stories by the ordained women can be found in the book Women Find a Way, edited by Elsie Hainz McGrath, Bridget Mary Meehan, and Ida Raming.

The Vatican has not recognized the ordinations of the priests and bishops in the RCWP movement. In the language of Catholic theology, these ordinations are valid but illicit.

However, the women priests and bishops consider themselves in full communion with Rome. They follow the ordination rite of the Catholic Church and believe they pass on the apostolic succession that has been given to them, in the same manner as it is passed on to male priests and bishops in the Church. In Catholic theology, apostolic succession is passed on by the intentional ordaining laying on of hands by an ordained bishop.

The first ordinations in North America for RCWP were in 2005, when four women were ordained priests on a boat on the St. Lawrence River. There are presently more than 70 ordained priests, deacons, and candidates in the RCWP movement in North America. A spokesperson for RCWP claimed that the new bishops were needed because numerous women who are already qualified for ordination are applying as candidates.

* Marjorie Reiley Maguire, who lives in Milwaukee, Wisconsin, is a Catholic theologian, with a Ph.D. from Catholic University, and an attorney, with a J.D. from the University of Wisconsin.