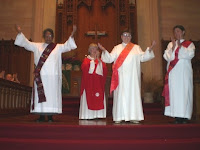 ..."In spring 2009 ,(Alta) Jacko approached Father Bob Bossie who preaches at St. Harold's Catholic Community in Uptown for help. "She asked me if I would mentor her," recalls Bossie, a member of the Chicago's Priests of the Sacred Heart who was ordained in 1975. ..."

"And yet Bossie helped Jacko anyway. He wanted to help a friend. While Jacko was training to become a deacon, a mandatory step prior to priesthood, it was Bossie who taught her how to say the liturgy. "I did it because she asked me, because she's very thoughtful," Bossie says. "When someone you like and respect asks you, you try to do it."

"Bossie is speaking out publicly for the first time, even though he knows he could lose his job as a priest, his pension and his home. And even though he disagrees, intellectually, with women being in the priesthood, he says his feelings tend to be more complicated than that. "I'm not going out of my way to support it," Bossie says. "I don't think that's sexist. I am a priest, and this is breaking down the hieratical priesthood.... But if people ask me for help, I feel compelled to help, out of respect and love. If God called me, why wouldn't God call a woman?..."