Bishop Patricia Fresen in U.S./ Will Speak in Sarasota, Florida on April 9th, 2011 "Transformed by Compassion" 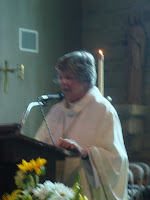 As part of a U.S. Tour
Dr. Patricia Fresen comes to Sarasota, Florida
A Talk You Don’t Want to Miss To
April 9th, 2011

TRANSFORMED BY COMPASSION
In this talk, Dr Fresen draws on medieval as well as contemporary sources to show that compassion can break down political, dogmatic, ideological and religious boundaries.
Releasing the energy of compassion into our world is possibly the most important calling each of us has, whoever we are and whatever our life situation may be.
"The ultimate power of God, universe and humanity is compassion." (Matthew Fox)
"The principle of compassion lies at the heart of all religious, ethical and spiritual traditions, calling us always to treat all others as we wish to be treated ourselves. We urgently need to make compassion a clear, luminous and dynamic force in our polarized world.” (Karen Armstrong)
Location
St. Andrew United Church of Christ,
6908 Beneva Rd. Sarasota, Florida 34238,
April 9th 4 PM--5:30PM; followed by liturgy at 6PM (Mary Mother of Jesus Inclusive Catholic Community
Suggested offering: $20/couples $30
Contact: sofiabmm@aol.com
941-955-2313
About your speaker:
Patricia Fresen, a Roman Catholic Woman Bishop, was born and raised in South Africa. She joined the RC Dominican Congregation upon completion of her secondary education. After obtaining degrees in Arts and Education, she taught in Convent High Schools while also being involved in School Administration. After many years of teaching, she spent seven years in Rome, studying theology at the University of St. Thomas and at the Gregoriana. It was there that she obtained a Licentiate in Theology. She returned to S. Africa in 1988 and was invited to join the faculty of the National Seminary in Pretoria, where she taught Sacramental Theology, Spirituality and Homiletics. In May of 1996, she completed her doctoral studies and thesis and obtained the Doctorate in Theology through the University of South Africa. From 1999 - 2003 Dr Fresen was on the Faculty of the Catholic University in Johannesburg.
In August 2003 she was ordained a Roman Catholic priest. As a result, she had to leave the Dominicans and give up her position at Catholic University. She subsequently moved to Germany, where she lives today. That same year, 2003, she became the Co-ordinator of the Training Program in Preparation for Priesthood for R.C. Womenpriests (RCWP).
In 2005 she was ordained a bishop to help ensure that the ordination of women will continue. Since then, Fresen has presided at many ordinations in Europe, Canada and the USA. The number of R.C. Women Priests grows year by year.
Since joining RCWP, Dr Fresen has been invited to speak at conferences or to lead retreats in the USA, Canada, Europe and South Africa.
Posted by Bridget Mary Meehan at 10:24 PM