Kathie Ryan, ARCWP, traveled to Israel in November with three companions. This her reflection on the journey. 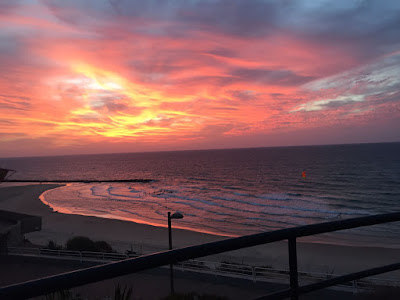 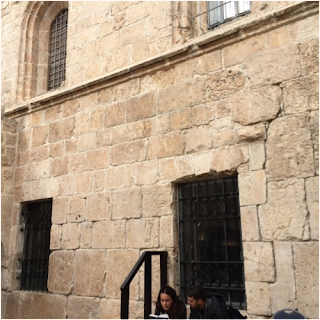 The most accurate way to describe the experience is to describe the building were the Upper Room is located in Jerusalem.  The first floor of the building contains the “burial site of King David.” The tomb is covered with an embroidered cloth and the room is divided in half by a wall to keep the women on the left and the men on the right. Visitors are somewhat quiet and most are praying.  Walk up the steps to the second floor to the Upper Room.  The room is open with a tree of life sculpture, a nave where tourists are standing taking selfies, and there is a sign in Arabic on the wall stating Christians are not allowed. (Pre-war sign).  The room is filled with chattering tourists. 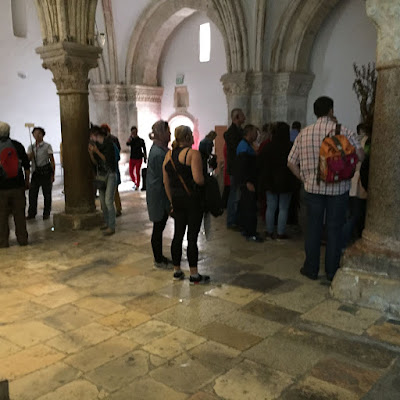 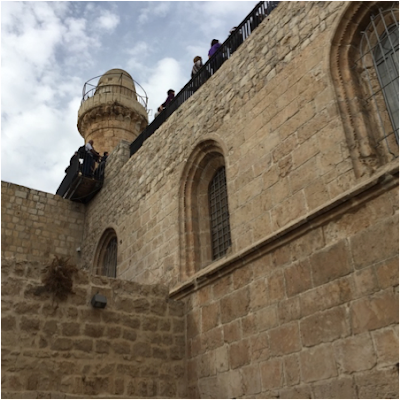 Step out of the Upper Room and look up.  There is a minaret with a sound system that calls Muslims to prayer at the prescribed times.  All over Israel I experienced Jews, Christians, Muslims, living and working in close proximity and yet each was turned inward living as if the other was not there.  I did not experience the dreamy Jesus of the gospels; rather I experienced my brothers and sisters living next to each other, walking near each other and yet most often missing each other. And then someone reached out with a smile and there was a divine spark that ignited another moment of love.

Bethlehem- did you know Israeli citizens are not permitted to enter Bethlehem?  I did not not.  We had an Israeli driver and guide, Yariv.  Yariv drove us to a check point outside of Bethlehem. A Palestinian driver, Jirjis (George) who did not speak any English, drove up and we got into his car.  Jirjis drove us into town and we met our guide Isa.  Isa walked us to the Church of the Nativity. Did I mention Isa means Jesus in Arabic?  Isa showed us the archeological sites that Queen Helena (Constantine’s mother) built in the 4th century.  We waited in line to see the cave, the birthplace of Jesus.  Just as the doors were about to open we were told Austrian TV was coming in to make a documentary and we would have to wait for an hour and a half. We decided not to wait. (Sidebar: the “manger” where Jesus lay was taken by the Crusaders in the 12th century to Rome. You can see the manger which is encased in silver at the Basilica of Maria Maggiore in Rome.  I actually was there in the 90’s and didn’t realize it was the actual manger!)  After our visit to the church we were brought to a large store where Palestinian crafts are sold.  Yariv told us we did not have to buy anything but Israel encourages tourists to buy to help the Palestinian people.  The Palestinian artists are famous for their beautiful creations from olive wood. 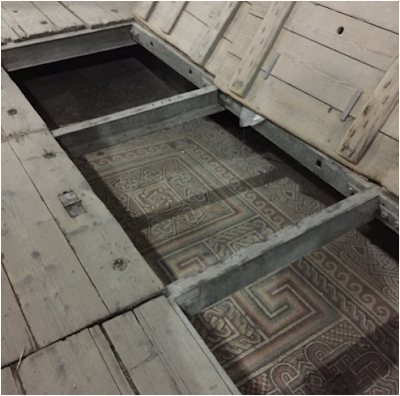 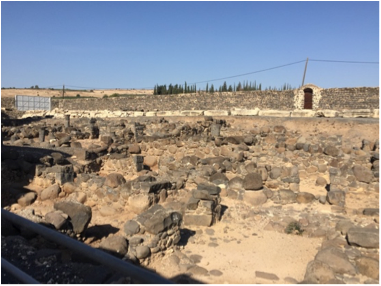 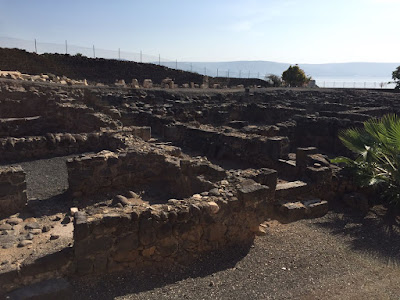 Nazareth is about 10 miles south of Capernaum. Nazareth was a small village of 25-30 families. No wonder everyone knew who this Jesus was!  The story goes that Capernaum did not have a rabbi.  Jesus comes to town, charismatic and filled with knowledge.  Peter and the other fishermen invite him in, and we know what happened after that.  Another interesting fact, just east of Capernaum is a town called Bethlehem-Galilee, some say that is the Bethlehem  where Jesus was born.  (We know there is no historical evidence that there was a call for a census at the time Joseph and Mary were heading south to Bethlehem outside Jerusalem.) 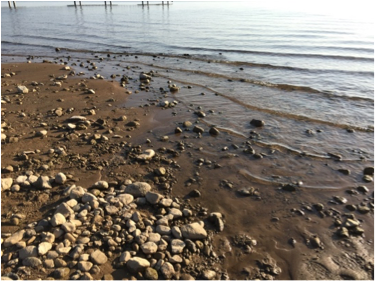 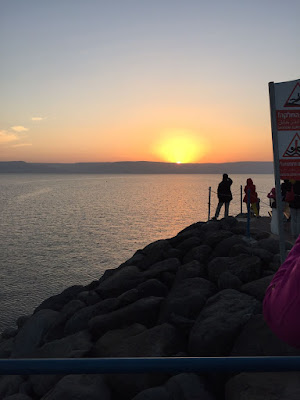 My traveling companion, Patrice, decided she wanted a tattoo in honor of her trip and in memory of her partner. With research she found the Razzouk Tattoo family business.  The Razzouk’s are an Egyptian family that has lived in Jerusalem since the 1800’s.  Their business is two blocks from the Jaffa Gate in Old Jerusalem.   The Grandfather delighted us with stories of his family’s life. The fourth generation is running the business now with the fifth generation in line to continue. 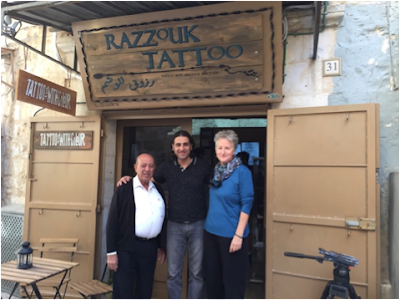 We walked the Via Della Rosa, the Stations of the Cross.  The path went straight through the middle of Old Jerusalem and through the market place.  The market place was filled with shops selling all types of Christian, Muslim, Jewish souvenirs and was packed with tourists. The Stations are “owned” by the Armenia, Greek and Roman churches. The churches are responsible for the upkeep of each station.  At the end of the Via Della Rosa is the Church of the Holy Sepulcher.   The Armenian, Greek and Roman Churches are responsible for the services. They have divided up the times and share the space separately from one another.

The land: we were told that in 1948 the British gave the land of Israel to the Jews as their official homeland. The Palestinians lost their land and the Jews took the land. I am simplifying the issue but overall that is the general understanding.  The reality: the land was settled by Jews and Arabs for centuries.  Our guide Yariv lives on a kibbutz which was settled in 1908 by his great Grandfather.  His neighbor and best friend is Palestinian. Their children play together and their families go on vacation together.

Handala- This character was originally drawn as a symbol of a young Palestinian refugee. Handala has hair like a hedgehog who uses thorns as weapons, he is not a fat, happy, pampered child. He is barefooted like refugee camp children. His hands are clasped behind his back as a sign of rejection. Handala is 10 years old and remains 10 until the day he and all children can return to their homelands.    We saw, Jews, Muslims, Christians wearing this shirt in solidarity. 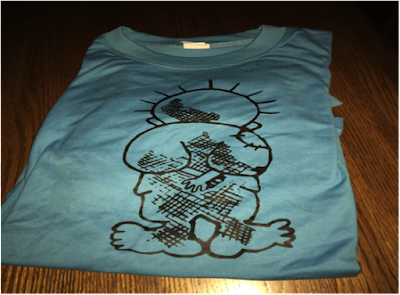 Did you know the Franciscans lease/own the land where Jesus gave the Sermon on the Mount and they built a church around the actual Rock where Jesus told Peter on this rock I will build my Church. Hmmmmmmmmm. Poor theology don’t you think? 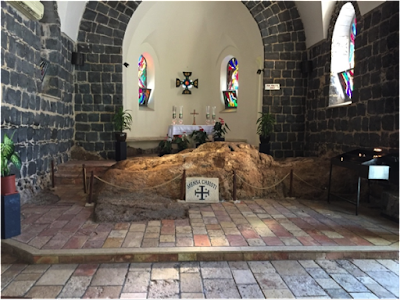 Qumram and the Dead Sea Scrolls:  The scrolls where found in Qumran in a cave by a goat shepherd in 1947. They were called the Dead Sea Scrolls because of the cave’s proximity to the Sea. They contain a copy of every book of the Hebrew Scriptures except Esther. Prior to going on the archaeological site we watched a brief movie.  The movie was about the Essenes who lived in the area in the first century. 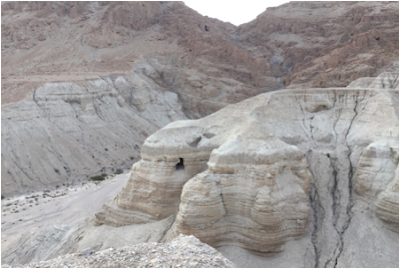 There is a possibility that John the Baptist may have been a member of this group.  The Essenes believed the end of the world would come when “all our opponents are defeated.”   I agree the end of the world will come when our opponents are defeated  not because the opponents have been vanquished but because we recognize and understand we have no opponents.  We are all one, all connected, all children of the Holy One. 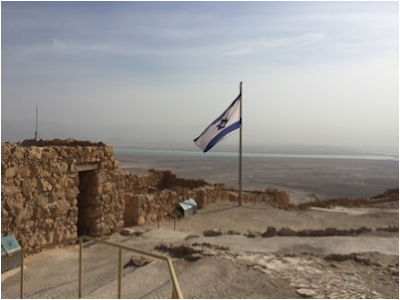