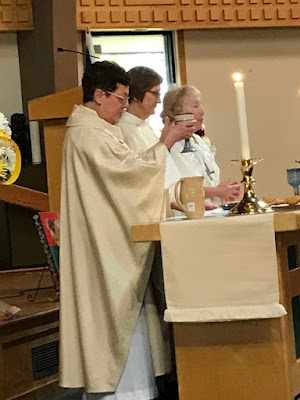 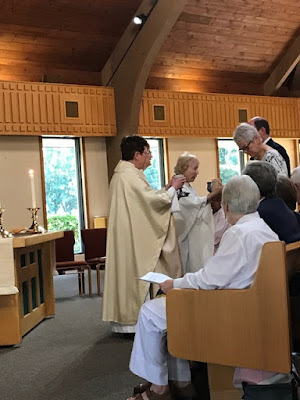 Presider:
On behalf of Judy Beaumont’s family, I welcome you
to this Memorial Mass as we honor the life among us
of God’s servant Judy Beaumont.
My name is Judith McKloskey, Roman Catholic Woman Priest and friend. Joining me at the altar are Bishops Andrea Johnson and Bridget Mary Meehan. Our music ministers are Linda Miska and Hank Tessandori. We are grateful to Pastor Paul Werner of St. Andrews, and to the members of Mary Mother of Jesus Community for their kindness and hospitality.
During this Eucharist, we pray in our shared belief
that God continues to be with us, and that we are called
to continue living the Gospel values that shined forth
from Judy.

So, in a spirit of gratitude and reverence, we begin,
as we always do,
In the name of our God: Mother/Father, Brother Jesus, and Holy Spirit.                              R. Amen
The grace of our brother Jesus Christ, the love of God,
and the fellowship of the Holy Spirit be with you all.
R. And also with you.
Judy donated her body to the medical school, so her physical remains are not here to be blessed with holy water. We know that she would like all of us to be blessed with water, because it reminds us of our baptism into Christ Jesus. That is how we will begin.
Sprinkling with water (Andrea, Judith, Bridget Mary); background music
Opening Prayer:
Let us pray.    (moment of silent prayer)
Loving God, it is our certain faith
that your Son, who died on the cross,
was raised from the dead,
the first fruits of all who have fallen asleep.
Grant that through this mystery
your servant Judy, who has gone to her rest in Christ,
may share in the joy of his resurrection.
We ask this through our brother Jesus Christ, your Son,
who lives and reigns with you and the Holy Spirit,
one God, for ever and ever.
R. Amen
Before we hear our Scripture readings, we’re going to spend a few moments reflecting on our beloved Judy Beaumont. Judy’s sister Jill and brother Ed and Judy Lee will share some of their memories.