What is the Problem with Women Deacons? by Phyllis Zagano, U.S. Catholic, My Response, Women Deacons and Women Priests are Related, Connected to Movement of Spirit for Justice and Equality

"Nothing, says this scholar of women’s ordination in the early church" 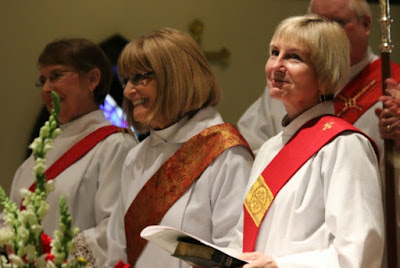 My response: I agree with Phyllis Zagano that there is no problem to restoring women deacons as far as church history is concerned.  However, I do believe there is a connection between women deacons and women priests.  If the church restores women deacons, it definitely will increase the pressure for women priests because fundamentally the full equality of women in every area of the church's life is a justice issue. The full equality of women in all ministries and leadership roles in the church is the work of the Spirit in our times.
In my view, the major issues is clericalism, not the fear of the connection between women deacons and priests.
Since 2002, the international Roman Catholic Women Priests Movement has been living a renewed model of priestly ministry in which ordained women deacons and priests minister in inclusive communities of equals with the baptized. We are flipping the pyramid of a top down hierarchical church into a more circular model that affirms the gifts and fundamental equality of all the baptized.
Bridget Mary Meehan ARCWP, www.arcwp.org

"At least 25 years ago the late Archbishop of New York Cardinal John O’Connor told me there were secret discussions in Rome about restoring women to the ordained diaconate. The problem, he said, was that they could not figure out how to ordain women as deacons and not as priests.
The confusion remains. One priest, a convert to Catholicism, wrote me recently:  “It seems somewhat disingenuous for an expert in women’s ordination to the diaconate to then insist that there is no connection with women priests...
One thorny (yet still unrelated) question, as presented by the priest mentioned above, is: What about women as priests? Some critics say that people who speak about women deacons, or even women who seek diaconal ordination, have a different agenda, i.e. to ordain women priests. Mostly, these critics do not recognize that the diaconate is a separate and permanent vocation and that ordination to the diaconate does not imply entry to priesthood. We know that today, married deacons are not eligible for priesthood. Neither would women deacons be eligible. Even so, expressions like “give them an inch . . .” and “the camel’s nose under the tent” illustrate the wariness of some individuals.”