My Response: Sister Katharina and women in the German-wide initiative Maria 2.0 are standing up and speaking out for equality in the Church. The women are making a statement by staying away from churches for a week and instead, wearing white for “mourning of injustice and for a new hope,” they gather and pray outside of churches. You are prophets of the future advocating gender equality now as the vision of Jesus for the 21st century. May your voices be joined by millions of women speaking out of love and passion for living their faith fully by ministering as equals images of the Holy One in our world today Bridget Mary Meehan ARCWP, #womenpriestsnow , https://arcwp.org 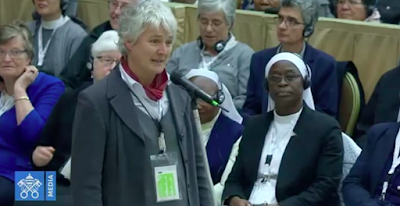 Sr. Katharina Ganz asks Pope Francis a question at the UISG meeting May 10th
"Sr. Katharina Ganz is the superior of the German congregation of Oberzell Franciscans. She approached the Pope with gentle humor, calling him “brother Francis” and introducing herself as “a Franciscan, just like you.”She expressed her desire, joint with the desire of many other women, to “serve the People of God as one who is equal among the People of God” and asked the Pope whether the question of women roles in the Church should perhaps be considered not just from the historical and dogmatic perspective but from the perspective of how Jesus related to women and how we can find answers from the 21st century in this “power of Jesus” and that we focus on what women and men and the whole humanity needs today.

I followed closely the global meeting of the superiors of women religious in Rome in the week of May 6-10. These are truly women who work on the margins and keep their ears on the pulse of the “signs of the times.” Their discussions touched on all the crucial topics of our world – climate, human trafficking, interreligious dialogue. I asked myself, if they will also turn their justice-trained eyes at the situation of women in the Church, if they will also speak about how the proclamation of the good news of Christianity is hindered by the inequalities and power abuses in the structure of our own Church. I had to wait the whole week but on Friday, in the meeting of all the sisters with Pope Francis, I heard a Sister speak up.

We have to admit that the answer to Sr. Katharina Ganz’ question was an old answer, an answer that bewilders many in its stubborn insistence on a reading of the Bible and the early Church history that many point out is selective and applied with severity not common with other topics that have evolved over time in the Church. Yet, something was new in this encounter. It was the voice of Sr. Katharina Ganz asking the question anyway, even if she perhaps did not have much hope for a radically new answer. She voiced what many Catholic women and men feel. With a gentle insistence, she spoke truthfully and honestly in an audience with the Pope, a setting where in the past perhaps only carefully self-censored and filtered voices appeared. Her voice deserves our attention. This is a voice of a new Church emerging out of the catastrophe of abuse that we have witnessed in the last years.

Sr. Katharina Ganz’ voice in the Vatican is joined in the week of May 11 – 18 with many voices of women all over Germany who are finding a new courage and a new passion for their Church. The German-wide initiative Maria 2.0 invites women to stand up and speak out for equality in the Church. The women are making a statement by staying away from churches for a week and instead, wearing white for “mourning of injustice and for a new hope,” they gather and pray outside of churches. They make of themselves a visible sign for a new church of equality, breaking the spell of going along with a power structure in the Church which excludes them from bringing their talents and their charisms fully in the service of their faith.

There are thousands of women in hundreds of parishes who participate in the action week of Maria 2.0. The initiative started just a few months ago with a handful women in parish in the German city of Muenster who, burdened by the evidence of sexual and power abuse in the church they love, said: it has to stop here.


What is important in both of the examples I just described is that these women, faced with inequality, did not give up their desire to live their faith fully in the church that is their own. In the love of their church, they are not simply hoping that things will “somehow, at some point” get better. Such a passive hope can be dangerous and can perpetuate unjust systems. But these women live a prophetic hope – they turn their hope in practical action of speaking out and being seen. In their actions for change, they already live into being the new Church in which we all are equal members, not just an audience for a small number of ordained men.


I am overjoyed that Sr. Katharina Ganz, as well as the organisers of Maria 2.0, participate also in the #overcomingsilence campaign. Their voices and their examples are exactly what Voices of Faith hopes to ignite and amplify.