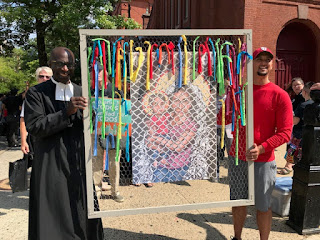 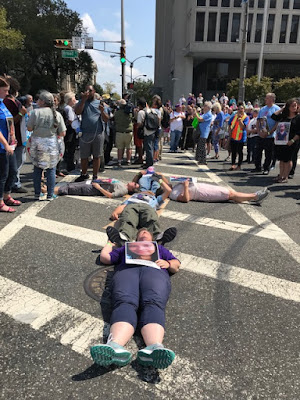 On the evening of September 3, we left Baltimore, a city with major problems, to travel to Newark, New Jersey.  As we tried to find our hotel, it became obvious that this city on the outskirts of New York City also had major problems.  It seemed  appropriate to stay in a ramshackle hotel across from the Newark Airport.

The next morning, we found St. Mary's Roman Catholic Newark Abbey Church where several hundred people, mostly Catholic, including nuns and priests, gathered for a prayer service. It was an Old World church rebuilt by immigrants after the original structure was torched by the American Protestant Association Lodge of New Jersey in 1854.  Originally, it was there for German immigrants, and then Irish immigrants made it a mixed community. Today, many of the parishioners came from Africa.

It was appropriate to start a rally and march at a welcoming place of worship.  During the prayer service, we learned the history of this parish and found out that so many prominent people in the past, including Benjamin Franklin, were virulently anti-immigrant.  Abe Lincoln, though, respected immigrants. One point made seemed humorous today, such as a German-American marrying a Polish-American. We heard from religious leaders who spoke about Jesus the Immigrant. Some of the speakers had worked with the poor in Central America, and addressed our government’s complicity in supporting death-squad governments there. They made clear that the roots of violence to the indigenous and their homelands was US capitalism and militarism. As such, the people of El Salvador, Guatemala and Honduras are seeking asylum from these countries which are victims U.S. military and corporate intervention.

Cardinal Joseph Tobin was introduced, and to our surprise, he was sitting in back of us. Janice turned to acknowledge him, and he responded with a smile.  Possibly, he remembered some previous encounters which took place in Baltimore during the annual US Bishops Conference. Some years ago, Janice and Bishop Tobin had conversed during a bread and soup dinner in the basement of St. Vincent de Paul Catholic Church.  And more recently, he called out Janice’s name as he entered St. Peter Claver Catholic Church to participate in a gathering Mass for the bishops. We were there to urge the church to end its history of sexism by allowing women to become part of the clergy.  The church is in a very poor part of Baltimore, and Philip Berrigan was an associate pastor there in the 1960s.

As we left the church, by happenstance, we were first in line right behind a memorial display of immigrants who died trying to reach the promised land.

It was wonderful to see other resisters we knew from New Jersey, New York and Washington, D.C. Some four hundred of us arrived at the federal building on Broad Street for a protest and a litany of speakers who detailed the history of resistance to the federal government’s anti-immigrant fervor.  This part of the day’s events was a bit too long as there was no shade from a very hot sun, and many of the participants were elderly.  There were two highlights, however, to the program.

The first was an impromptu address by a Hispanic woman with three grandchildren.  The mother of the children was inside the federal building being prepared for deportation.

The second was the closing speaker Joseph Tobin, Newark’s archbishop, who admonished our government for its inhumane treatment of asylum seekers. He ended his comments with “End the inhumanity.” We chanted this refrain several times.

Finally, some fifty of us who were risking arrest spread across Broad Street, and soon thereafter the police closed off traffic to the area. Five of the protesters laid down on the street in the form of a cross.  A passerby asked why they formed a cross, and we explained that Jesus Christ was crucified on a cross.  Later Janice replaced one those on the ground.

A small group of musicians on the sidewalk began with AMAZING GRACE, and we all joined in the singing.  Another song we really dug into was THIS LAND IS MY LAND.  The sidewalk troubadours sprinkled among Woody Guthrie’s lyrics some new lines.  We loved hearing that the Kings Bay Plowshares were part of this land.

Though the police lined up five buses to whisk us away after the arrests, it became apparent that there was no interest in taking us into custody.  So the protest against ICE and the government’s mistreatment of immigrants, including the separation of children from parents, morphed into a festival on the street.  After about an hour of negotiations, it was decided to declare victory and end with a closing circle.  As one police officer said, “Newark is a Sanctuary City, and you made your point.”  Another officer remarked that our demonstration was all over the news.

Six of the protesters volunteered to be arrested, and they were soon released with tickets. Charges were dismissed after our July 18 protest in Washington, D.C.  In the second phase of this Catholic-organized resistance to government mistreatment of migrants on the Southern Border, the police probably recognized how ridiculous it would be to arrest people on the right side of the law.  Phase Three will take place in El Paso in October.  It is a blessing that so many good people are moved to say no to inhumanity directed at the poorest of the poor and the voiceless.

As we said our good-byes to the other resisters, we felt some fulfillment in our meager attempt at challenging our government’s inhumane practices.  We also noted in our decades of protesting injustice, this was the first time a cardinal of the Roman Catholic Church joined us.