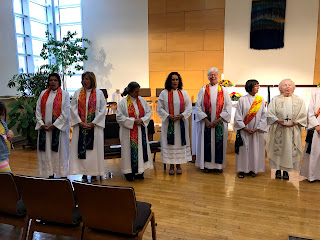 My response:This latest effort at squashing dissent by Irish priest Tony Flannery is an indication of the deeply entrenched fear of the Vatican towards Roman Catholic Women Priests.

This "batten down the hatches to resist the growing support and presence of women priests" contradicts Pope Francis' call for open dialogue in the contemporary Church.

This fear-based mandate to Tony Flannery, a prophetic, outspoken advocate of an inclusive Church, is a violation of the Church's own teaching on primacy of conscience. It reflects the deeply entrenched misogyny of the hierarchy and its toxic teaching that violates our fundamental spiritual authority to listen to and follow the voice of the Spirit speaking in our souls. Theologians through the centuries, like Thomas Aquinas, uphold the fundamental primacy of conscience. Thomas is reported as saying: "I'd rather die excommunicated than violate my conscience."

This so-called loyalty oath threatens not only the primacy of conscience of Tony Flannery, but of all Christians who dissent on church teaching because they must obey God first, not an institution whose teaching violates their consciences.

There are 1.3 million members of the Roman Catholic Church. The believing community is the Church, not the hierarchy alone.  A growing number of Catholics dissent from the toxic, sexist teaching that forbids women's ordination. Tony Flannery is not alone. There are many Catholics around the world who support women priests and the growth of Roman Catholic Women Priests around the world.  All of us are spiritual equals who are living our call  to prophetic obedience to disobey an unjust law.

Kudos to Tony Flannery for being a prophet in our times in resisting Vatican oppressive loyalty oaths that violate the primacy of conscience. Roman Catholic Women Priests and the entire Church are blessed by your courages witness for equality, justice and inclusivity.