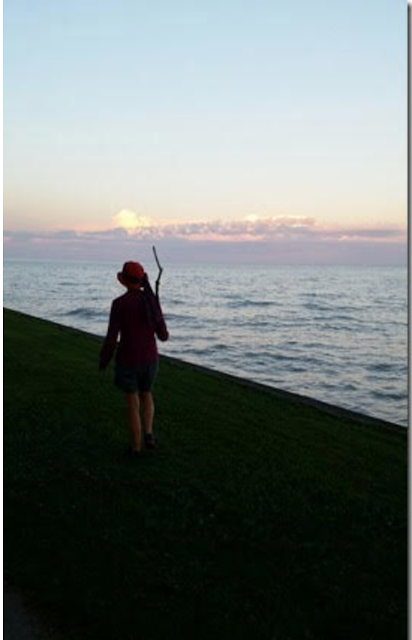 Rev. Dr. Michele Birch-Conery’s earthly life spun round charisms connected to language, storytelling, prayer, and to serving others as a nurse, nun, teacher, priest and bishop.

Michele was born in Vancouver, British Columbia, Canada in 1939, on August 3rd, the feast day of St. Lydia, who made her living dyeing, spinning and selling rare and expensive royal purple cloth. The process like life was challenging. According to the New York Times:

“To make Syrian purple, marine snails were collected by the thousands. They were then boiled for days in giant lead vats, producing a terrible odor. The snails, though, aren’t purple to begin with. The craftsmen were harvesting chemical precursors from the snails that, through heat and light, were transformed into the valuable purple dye.”

Lydia met the apostle, Paul and, through her conversion, she drew many Europeans to Christianity.

Many of us have witnessed how Michele possessed the rare gift of waiting on the soul and of transforming its wisdom into words, into the royal purple cloth of a radical hospitality for difference, and compassionate action for change in systems of oppression and injustice. Some of her favorite sayings were “Patience in the Spirit” and “Holy Spirit back-up plans.” Michele’s faith was well-honed and she had the flare of a true artist. Here is the opening stanza of Michele’s last poem, When Grief Opens the Doors to the Sacred published in 2017 by Suny Press in Unruly Catholic Nuns: Sisters’ Stories.

When grief opens the doors to the Sacred,

we come to the thinning seasons, summer to Autumn, and then

when eternity enters our awareness keenly. We diminish

somewhat, within the great spaces

of our universe, while parts of our planet enter a resting and

dying time a fallow time to

prepare, without apology, the renewals of Spring.

Our dying, at any time of year, is like this. It is as if we

through to and reach into eternity, even as our bodies

to their necessities and then weaken toward the moment

of their last breathing. We are held and embraced by

Beyond ourselves. It is time we are slowly coming to know

Michele’s birth mother was Rose Conery, a single mom. She was fostered by a loving family and adopted at four years old. Sadly, her adoptive parents were abusive of Michele; however, this experience influenced her to become a tenacious diplomat and lover of fun.

Michele writes that she was “privileged to be class president those three years and delighted in experiencing the tremendous loyalty nurses have for each other, their open-mindedness and excellence in nursing.”

After graduation, she worked in general duty nursing at St. Martin’s Hospital in Oliver, BC for a year. “It was a 40-bed hospital and I loved it,” she said, “because I got to do everything. I was generally the ‘in charge’ nurse on whatever shift I worked and I organized staff to attend to a variety of tasks. It was an excellent experience.”

At the end of the school year in August 1963, Michele entered the Congregation of the Sisters of the Holy Names of Jesus and Mary (SNJM). Four years later, she completed a BA with an emphasis in Education and taught Grade 7 in Everett, WA for one year, and then grade 10 at Holy Names Academy in Seattle.

“By that time,” she writes, “it had become apparent that I was more suited to teaching at post-secondary levels.”

Because of her writing skills, in 1970, Michele was invited by the Creative Writing Department at the University of Montana to pursue a Master of Fine Arts Degree in the genres of poetry, fiction and drama. She majored in poetry and completed the degree in 1973.

The following year Michele left the SNJM and Montana for the University of Iowa in Iowa City. For the next 10 years, as she worked on her Ph.D. in English Literature, she supported herself working as a nurse, including several years with the ‘Flying Nurses,’ an organization that provided temporary working assignments to under-staffed hospitals in the U.S.A.

In 1985, Michele completed her Ph.D. in English Literature with emphases in Modern British and American Literature, Feminist Literary Criticism and Poetry. It included work on the History of Literature, specifically philosophical and literary criticism of current prevailing artistic practices.

In 1985, Michele returned to British Columbia “to make it my home,” she said. Two years later she became a professor of English Literature and Women’s Studies at North Island College in Port Alberni on Vancouver Island (where she lived for twenty years after a reunion with her birth mother). She was involved in outreach by television to the surrounding areas, which included special services to First Nations communities.

Michele writes: “I was engaged in TV teaching to the entire province by way of a college network run from the University of British Columbia campus. Of special note is my participation in the province-wide Status of Women Committee for the College system. After several years of intensive meetings and labor, we introduced a sexual harassment policy that was accepted by the college union. As a result, the number of harassment cases dropped to nearly zero.”

She retired from North Island College in August 2007.

Michele recounts, “It is evident from my numerous nursing assignments that I spread my wings and flew far and wide. Twenty years in the professorate gave me similar experience intellectually, creatively and procedurally. Of special importance was the outreach to remote areas of the province by way of small learning centers and television teaching. “

In 2004, Michele was ordained a deacon in a ceremony on the Danube River in an initiative known as Roman Catholic Women Priests (RCWP). In July 2005, she was the first woman ordained a priest in Canada in a ceremony on the St. Lawrence River. A lot of publicity from the Canadian press followed.  Despite the challenges of chronic illness, Michele established three faith communities on Vancouver Island with members of RCWP. She companioned many of the first women and one man in the program of preparation for priesthood. Michele joined the Association of Roman Catholic Women Priests (ARCWP) in 2013.

In 2014, Michele moved to Windsor, Ontario where she ministered with ARCWP priests Barbara Billey, Karen Kerrigan, and Jeni Marcus with the Heart of Compassion International Faith Community, and in 2015, after ten years as a priest, she was ordained a bishop within the same association. Michele's role as a bishop was one of the highlights of her life.

In Fall 2019, after the recurrence of an extreme illness with a syndrome from her youth, Michele wrote, “And so I approach the closing of my life with a heart full of gratitude for my life and for the lives of all of you. I send you my heartfelt prayers for lives of peace, hope and justice.”

In her last weeks of life, Michele was tended by members of her Windsor faith community and wonderful local health care providers in their Church house in Rhea Lalonde’s apartment alongside the Detroit River. She died peacefully and was received into the fullness of Divine Mystery in Hospice at Hotel Dieu Grace Hospital (the same room in which Barbara’s mother had died two years prior) on the Canadian Thanksgiving weekend in the early evening of October 11. Rhea and Barbara Billey along with Brittany, a Hospice nurse bathed, anointed and shrouded Michele. After reading Luke 23:44; 24:1-10 (Jesus’ burial), a smile appeared on Michele’s face.  She already seemed to be enjoying her new life with our Holy One with the Cloud of Witnesses and in the Communion of Saints.

Special thanks to the women of Heart of Compassion who were intimately involved in the care of Michele for many years and at the end of her life: Rhea Lalonde, Sharon Beneteau, Jennifer Harvey, Marg McCaffery-Piche, Kathy Worotny, Suzanne M and Barbara Billey. Gratitude, too, for Jeni Marcus, Karen Kerrigan and Sydney Condray, priests with arcwp who kept the prayers flowing in liturgy and outside, as well as the prayers, support and love rendered by members of our international women priest movement.

Michele’s memoir, Birdwoman: Memoir of a Migrant Mystic will be published posthumously in 2021.