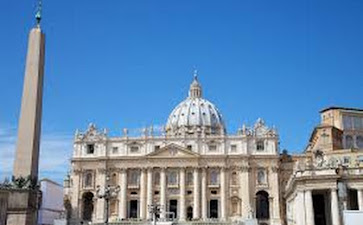 Pope Francis does not cease to give surprises in his pontificate. Some not so good, others more or less. In any case, the treatment he has been giving to women in the Vatican and Curia is striking. The number of women in the Vatican has been increasing with the last appointments, but not enough and not as it should be.

He dares to denounce the situation of servitude and slavery in which women live in the patriarchal society. Patriarchal society that does not exclude the Church as a religious institution. On September 8/21 he said:

"Men and women have, however, the same dignity, but there is in history, and still today, a slavery of women. Women do not have the same opportunities as men."

On several occasions he has drawn attention to the scarce role of women in the Church. The first time he referred to it returning from World Youth Day in Rio de Janeiro, September 2013.

In October 2013 in an audience granted to the Pontifical Council for the Laity he said in his speech:

"I suffer, I really mean it, when I see in the Church or in some ecclesial organizations that the role of service of women, which we all have and should have, is transformed into a role of servitude."

The presence of women employees in the Vatican is steadily increasing. In 2019 there were 1,016, 22% of the total staff. With new appointments, this number has varied.

Attention is drawn to the positions assigned to women, whom Pope Francis has appointed to administrative positions in the Dicastery.  He has doubled the number of undersecretaries from two to four. Positions previously held by priests.

We recall the appointment he made in 2017 for the Dicastery for the Laity, Family and Life, headed by Gabriella Gambino and Linda Ghisoni, both mothers of families, a matter of much novelty in the Holy See. For the Vatican Communications Dicastery, the number of lay people is high compared to other offices of the Holy See, where 2 women occupy leadership positions: Natasa Goverkar, Slovenian, as Head of the Department of Pastoral Theology. Cristiane Murray, Brazilian, appointed as Deputy Director of the Vatican Press Office.

Carmen Ros Nortes, a Spanish nun, as undersecretary of the Congregation for Institutes of Consecrated Life, the third woman already in this role.

In January 2020, he appointed Francesca Di Giovanni, the first woman to achieve a high administrative position in the Vatican Secretariat of State, the most important office of the Vatican City State, as Undersecretary for the Multilateral Sector of the Section for Relations with States, a position that did not exist. This appointment was very prominent in the press, as the presence of women in leadership positions has been scarce.

August/2020 Appoints 6 women to financial affairs are: Marija Kolak, German, worked at the Berliner Volksbank and is currently President of the Bundesverband der Deutschen Volksbanken und Raiffeisenbanken. She is married and has three children.

María Concepción Osacar Garaicoechea, Spanish, is a founding partner of the Azora Group and Chairwoman of the Board of Directors of Azora Capital and Azora Gestion, SGIIC. She holds a law degree from the Universidad Autónoma de Madrid. She is married and has two daughters.

Ruth Mary Kelly, British, worked in the Labour government between 2004 and 2008 as Secretary of State for Education. She currently holds the position of Pro-Vice-Chancellor for Research and Enterprise at St. Mary's University in London.

Lesile Jane Ferrar, British, Commander of the Royal Victorian Order, was Treasurer to Prince Charles of Wales, from January 2015 to July 2017. She studied at Harvard Business School and Durham University.

Of five of the 22 most important offices of the Curia (Secretariat of State, Secretariat for the Economy, three Dicasteries, nine Congregations, five Councils, three Tribunals) now have women on the leadership team.

A significant appointment in February/2021 was the appointment of a woman as undersecretary for the Synod of Bishops for the first time. This appointment means that for the first time a woman will have the right to vote in an organ of power of the Catholic Church. She is Nathalie Becquart, responsible for the youth apostolate in France.

August 21/2021: Appoints the Salesian nun Alessandra Smerilli, interim secretary of the Dicastery for Integral Human Development and delegate of the Vatican Commission Covid-19.

November/2021: Francis appoints Raffaella Petrini, a Franciscan nun, as Secretary General of the Governorate of Vatican City State. She becomes the "number 2" in the Vatican City State. It is the first time that a woman occupies this important position, previously reserved for bishops.

It seems that Francis wonders and will continue to wonder if it is possible to enhance the role of women within the Church. He has said, "it is a reality that worries me very much." (May 16/2016)

Let us not forget the fact that Francis in January/2021 at 84 years old, reformed Canon 230 authorizing the lectorate, acolyte including that women can exercise them and help at the altar during liturgy.

Many more reforms remain to be made both in the Canons and in the structure of the clerical hierarchical institution as such.

The Ruah, the spirit of the Divinity will continue to blow, because a Church without women is not the Church. We women want to serve within the Church, announcing the Gospel, we admire and respect the fact that there are women in the administrative part in the offices of the Vatican and Roman Curia. The emptiness of the presence of women in the Church can be seen and felt.

"Women have a special sensitivity for the 'things of God,'" Francis has said-, "especially to help us understand the mercy, tenderness and love that God has for us." May 12/2016.