Vatican includes the Women’s Ordination Conference on its website, A positive sign that Pope Francis is listening to Catholics who want a more inclusive Church? by Bridget Mary Meehan ARCWP 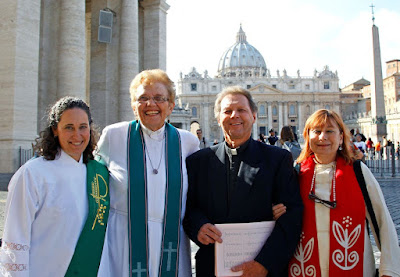 Members of the Women’s Ordination Conference WOC - including women priests-stage a protest in front of St. Peter’s Basilica, in Rome, on Oct. 17, 2011.
The Vatican has included the Women's Ordination Conference, advocates for women’s ordination, on a website promoting its two-year consultation of rank-and-file Catholics in the latest sign that Pope Francis wants to hear from all Catholics during the process. https://www.synodresources.org/resource_post/7415/
The Women’s Ordination Conference has launched a “Let Her Voice Carry” campaign in conjunction with the Vatican’s 2023 “synod” or gathering of the world’s bishops. https://www.womensordination.org/let-her-voice-carry-2/
In the run-up to the meeting, the Vatican has asked dioceses, religious orders and other Catholic groups to embark on listening sessions to hear from ordinary Catholics about their needs. (AP Photo/Andrew Medichini, File)

The good news that the Vatican includes the Women’s Ordination Conference on its website could be a positive sign that Pope Francis is listening to Catholics who want a more inclusive Church where all ministries are open to women, and where gender equality is a reality.

The full equality of women in the Church is the voice of God in our time.

Since 2002, the international Roman Catholic Women Priests Movement has been leading the Church toward a renewed model of ministry in inclusive Catholic faith communities who embrace the message and example of Jesus who called women to be disciples and apostles.  (Luke 8:1-3) While Jesus never ordained anyone, the Risen Christ appeared first to Mary Magdalene, and called her to be the apostle to the apostles

Roman Catholic Women Priests are walking in her footsteps.

We are leading the Church toward gender equality by ordaining women now for public ministry in the Church. Women Priests serve ordinary Catholics who are calling for a more loving, compassionate, inclusive Church where all are treated as beloved spiritual equals.

Church leaders, including priests, theologians, and some bishops, have been advocates of women's ordination in spite of Vatican threats. Courageous priests, like Fr. Roy Bourgeois, faced condemnation and removal from the priesthood, for his attendance at Janice Sevre-Duszynska's ordination. Sister of Charity Louise Lears was forced out of all church ministerial roles by Saint Louis Archbishop Raymond Burke, for her belief that all church ministries, including women’s ordination, should be open to women.https://www.ncronline.org/news/community-supports-ousted-st-louis-nun

---Over 175 Catholic priests have signed on to a letter in support of Maryknoll priest, Fr. Roy Bourgeois, who has been told to recant his support for women's ordination or be removed from the priesthood. The letter that affirms primacy of conscience was delivered, Friday, July 22nd, to Fr. Edward Dougherty, Superior General of the Maryknoll Fathers and Brothers in Maryknoll, NY.http://www.nytimes.com/2011/07/23/world/23priest.html?pagewanted=all


---300 Austrian priests issued a "Call to Disobedience" to promote priesthood for women and married men. The Austrian priests and deacons read aloud a public prayer for "church reform" in every Mass. http://www.ncronline.org/news/global/300-austrian-clerics-call-women-priests

---Over 250 German speaking theologians called for end to mandatory celibacy and for women's ordination in the Roman Catholic Church.. http://thegreatone22.wordpress.com/2011/05/25/


---Bishop Markus Buchel, bishop of the diocese of St. Gall in Switzerland spoke out openly for women's ordination on Easter Sunday/2011 in an explosive statement in the St. Galler Pfarreiblatt [St. Gall Parish Paper]. He said:: "We must search for steps that lead there," "I could imagine that women's diaconate could be such a step."Regarding priesthood for women, Büchel said, "We can pray that the Holy Spirit enables us to read the signs of the times." http://www.praytellblog.com/index.php/2011/04/24/swiss-catholic-bishop-speaks-out-for-womens-ordination/

--- Bishop William Morris, from Australia, was forced to resign by the Vatican for wanting to discuss married priests and women priests as a possible response to the shortage of priests. The National Council of Priests of Australia released a statement in support of Bishop Morris. http://www.catholicnetwork.us/calls-for-reform/priests-support-bishop-sacked-by-vatican/

---Cardinal Jose da Cruz Policarpo of Lisbon, Portugal has said there's "no fundamental theological obstacle" to the ordination of women as priests in the Catholic Church. http://www.cathnews.com/article.aspx?aeid=26981

VATICAN CITY, Jan 20 (Reuters) - The Vatican has given space on its website to a Catholic group that demands the ordination of women priests during consultations ahead of a key meeting next year.

While the Church remains opposed to women priests, the inclusion of resource material from the Women's Ordination Conference (WOC) is part of an opening up of debate on a range of issues that has pleased liberals but angered traditionalists.

It follows the publication last month of material from a Catholic gay rights advocacy group on the same part of the website dedicated to the meeting, which is known as a synod. read more

That publication was criticised by Catholic conservatives who have accused Pope Francis and the Vatican of sending mixed signals on traditional teachings.

Supporters see it as an opportunity to change the Church's power dynamics and give a greater voice to lay Catholics, including women, and people on the margins of society.

Pope Francis has said he wants the long consultative phase to be broad and inclusive, but conservatives say the three-stage process of dialogue - local, national and international - may erode the hierarchical structure of the 1.3 billion member Church and, in the long run, dilute traditional doctrine.

The Catholic Church teaches that only men can be priests because Jesus chose only men as his apostles.

Supporters of a female priesthood say Jesus was merely conforming to the customs of his times and that women played a greater role in the early Church than is commonly recognised.

The pope has ruled out a female priesthood, saying the "door is closed" on the issue.

He has allowed women to have greater roles in a number of Vatican departments.

"The courageous dialogue called for by the synodal process must include open conversation about women's ordination," WOC said in a Tweet welcoming the inclusion of its material on the synod website.

The U.S-based organisation's package of background material is called "Let Her Voice Carry - a Synod Toolkit for Ordination Justice Advocates".

The group calls itself the "uncompromising feminist voice for women's ordination and gender equity in the Roman Catholic Church" and its leaders assist at the ordinations of female priests, which Church leaders say are illegitimate and invalid.

The 2023 synod, called "For a Synodal Church: Communion, Participation and Mission" is already steeped in division.