Male Supremacy in the Catholic Church: An Insider's View by Roy Bourgeois, A Review by Diane Dougherty ARCWP and Bridget Mary Meehan ARCWP 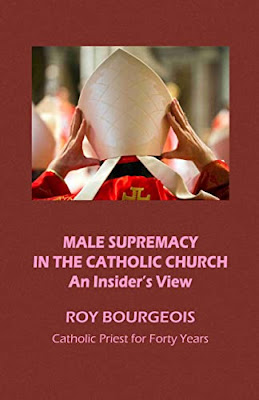 For the most part, male supremacy is like the air we breath, the water we drink and the clothes we put on daily-it is an everyday aspect of American Life. Roy Bourgeois skillfully outlines his experience from his early years in Louisiana to his awareness of a world outside of male supremacy. What he did not plan on was that his awareness and open critique of the church and its changeable positions and policies would catapult his"elimination" from the very structures that raised and nurtured his 40 year vocation. As he undid the chains of supremacy that bound him, the Powers that be ousted him from doing further damage to an institution intent on maintaining its position of power over people.

He is correct that ignorance, cruelty and the heresy of church teaching is the DNA that brings this illness from one generation to the next...the remedy being a movement away from the tentacles of supremacy for all the baptized. Until those bonds are released, ordained male supremacists will continue to lead people toward the worship of golden calves. Roy chronicles his difficult and heart wrenching journey toward freedom, finding hope and peace beyond those old notions. All Catholics, clergy and lay should read his journey and follow suite. Consider buying a copy for your priest and Bishop. And, reflect on your own experience of male supremacy within the church and your movement away from it. Write your own book!
Bridget Mary Meehan ARCWP
This book, written by Roy Bourgeois, a courageous priest, who risked everything to support the equality of women in the  Roman Catholic Church should be mandatory reading for all seminarians in the world.
Roy shares his inspirational journey of 40 years of faithful service to God's people, including five years working with the poor of Bolivia before being expelled by the military dictatorship.  Roy's decision to attend the ordination  of Janice Sevre-Duszynska in Lexington, Kentucky was a powerful challenge to male supremacy and clerical power.
I will never forget his moving homily. He put everything on the line for gender equality in the Roman Catholic Church. Like the prophets  of old, he stirred the hornet's nest of male supremacy and the Vatican  responded by expelling him from the priesthood in 2012.The RC hierarchy did not punish pedophile priests by removing them , but rather reassigning them.
Pope Francis should apologize to Roy for the Vatican's vindictive treatment and to women priests whom they have excommunicated, male priests they have expelled from the priesthood, religious women they have fired from their jobs in religious institutions.
This sexist prohibition of Ordination of women in the Church is an example of misogyny and of spiritual abuse.
Thanks, Roy, for your courage and witness to the example of Jesus who called women and men to be disciples and who never ordained anyone! Mary Magdalene would be proud of you!
Bridget Mary Meehan ARCWP
Posted by Bridget Mary Meehan at 4:13 PM