In this Year of Mercy, designated by Pope Francis, this story provides a glimmer of hope. 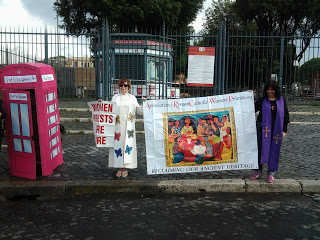 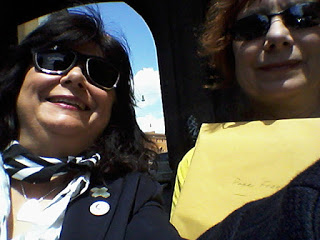 The Vatican has literally cracked open its door in a gesture of openness to women priests for the first time.

In previous years as an activist for women priests, our efforts in Rome were met with demonstrable resistance.

In 2001 our Women’s Ordination Conference (WOC) banner hung on the street directly on the edge of the Vatican.  It read “Ordain Women” in seven languages. 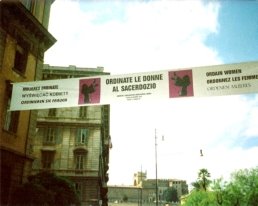 When the captain of the Italian police saw it at our banner blessing, he asked me for its legal documentation.

Fifteen years later, in 2016, Italian authorities approved photo-journalist Giulia Bianchi’s collection of posters of women priests displayed all through the streets of Trastevere and throughout Rome.

On June 29, 2002, seven women were ordained on the Danube, initiating the international the Roman Catholic Women Priests Movement, which today numbers 225 in thirteen countries. 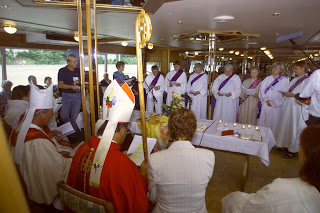 When progressive Catholics gathered in Rome in 2011 we showed the movie, "Pink Smoke Over the Vatican,” the Jules Hart documentary about the struggle for justice for women in the Church. 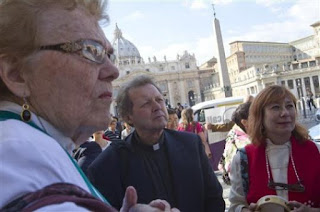 As we processed along the Via Conciliazione approaching the Vatican, Maryknoll Catholic priest Father Roy Bourgeois and Women’s Ordination Coordinator, Erin Hanna, were met by the Italian police.  They were shoved into police cars and held in custody for several hours. Their banners were confiscated. Deacon Donna Rougeux ARCWP and I, in my priestly vestments, were blocked from entering St. Peter’s Square. 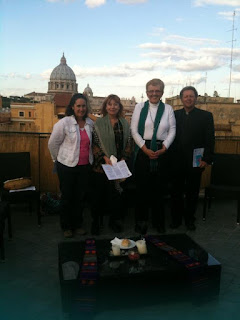 In March 2013, our community, the Association of Roman Catholic Women Priests (ARCWP) sent me back to Rome for the Conclave.  After meeting with media and shielded by the columns of St. Peter’s Square, I walked away, holding my “Women Priests Are Here” banner. 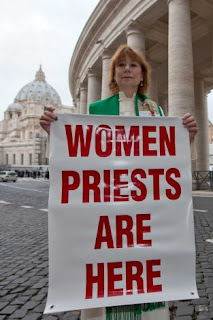 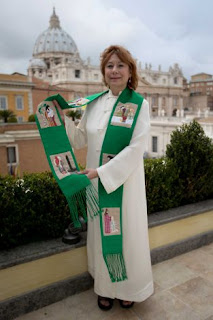 Soon after the Italian police grabbed my banner and  questioned me. “Why are you dressed like a priest?” the officer asked. “Because I  have been a priest for five years. I lead the Resurrection Community in Cincinnati and the Emmaus Community in Lexington, Kentucky," I said. "Here’s my card. "Would you like a blessing?” His face revealed confusion. “How many women priests are here?” he asked in an agitated voice. “How long are you staying?”  I answered "about a week." Then, he walked back to the squad and dialed the Captain for further orders. Meanwhile, a crowd had gathered in the rain as a Spanish radio journalist , who had also never seen a woman priest, interviewed me. When the officer returned, he told me to get into the squad car.  After considering my options at further resistance, I complied.  When the car drove off, I didn’t know where they were taking me. They told me I needed to show them my passport, which was at the convent where I was staying. When I explained that I didn’t want them to disturb the conservative Italian nuns by revealing my priestly identity and facing eviction, the police kindly acquiesced. They waited outside until I returned with passport in hand. They ordered me not to appear on the streets of Rome in my priestly attire again.

However, I did not obey their command: Five hours later, I presided at Eucharist in  a community center in Rome.  Later that evening I was in St. Peter’s Square with another “Women Priests Are Here” banner hidden in my clothing as white smoke swirled over the Vatican and the newly elected Pope Francis appeared on the balcony.

Immediately, the whole world fell in love with him. 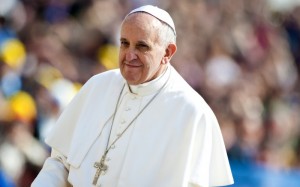 Three years later, from May 28 – June 4, 2016, ARCWP Christina Moreira from Spain and I participated in a Jubilee of Women Priests in Rome organized by Women’s Ordination Worldwide. Meanwhile, the Vatican was celebrating a Jubilee of (male) Priests .

This time, a different atmosphere prevailed.

Not only were there posters of women priests displayed near the Vatican, our group was given permission to witness alongside Castel Sant Angelo as seminarians processed by to St. Peter’s Square. Some  gave us a thumbs-up as they passed by and took flyers from WOC's co-leader, Erin Hanna. 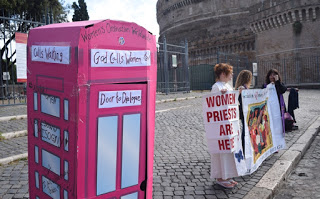 Christina and I, in our priestly garb, held up our banners: “Women Priests Are Here” in Spanish and English” as well as South African artist Dina Cormick’s banner of Phoebe celebrating an early Church Eucharist. 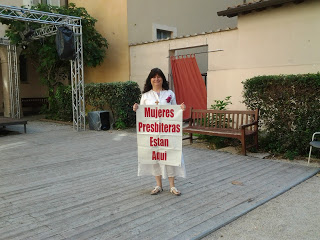 In addition  at our prayerful June 3rd witness, WOW picked up on Pope Francis’ theme of “opening the door to dialogue” symbolized by a cardboard phone booth.

As before, the police were present during our witness for women priests. I recognized one of them from my other Vatican encounters with law enforcement. However, the surprise this time was that a female police officer spoke with us, informing Christina and I that we needed to remove our stoles and fold our banners. She assured us that these items would be at the police station and available for pickup after the papal liturgy.

After an interview with Sylvia Poggioli from National Public Radio, the female police officer and three other officers escorted us to our designated seats in St. Peter’s Square for the celebration of the Jubilee of Priests liturgy at which Pope Francis presided.

In this Francis -designated Year of Mercy another “miracle” occurred.

On May 31st,  2016, the doors of the Vatican Curia opened to  us women priests. Christina Moreira and I made a connection with a senior Vatican official who is close to Pope Francis.

After waiting in line in the hot sun in St. Peter’s Square along with hundreds of other pilgrims from around the world, we were cleared to enter the Curia offices. Upon speaking with two Swiss guards, we entered an office with two lines: one for archival documents and the other for permissions to visit with Vatican officials.

When the Vatican official verified our confidential contact, he informed us of our appointment time. After we returned, we were given directions to walk to the Curia. I gulped when I heard this infamous place, which I associated with secrecy, injustice and even torture. Once inside the building, we misinterpreted the Swiss guards directions. Instead of taking the elevator, we walked up a winding marble staircase  with no railings, and huge statues of Roman goddesses towered above us. It felt like a trip back to antiquity. I wanted to take photos but then caught myself in case we were being watched. At the top of the stairs, we came to a dead end, facing a gigantic wooden door. Careful not to fall ,we retraced our steps. Back on the first floor, we took the elevator.

When we reached our final destination,  a courteous official led us to a reception room. After a few minutes, the Monsignore appeared and welcomed us warmly.

Christina shared her call to priesthood with him. Then, I presented him with the envelope that held the online petition of support for the  women priests movement.  In this petition, women priests are requesting that Pope Francis lift our excommunications and all punishments against our supporters and begin a dialogue. I also included a copy of the DVD "Pink Smoke Over the Vatican".

In  an impassioned plea for dialogue with Francis about women priests and gender justice in our church, I addressed the following issues:
-The history of women’s leadership as deacons, priests and bishops in early Christianity
- Activism for Women's Ordination throughout the years, including our banner in Rome, the WOC’s billboard campaign and the Irish “New Last Supper Painting."
- Our women priest communities are non-clerical and circular in decision-making.
- We use feminine as well as masculine images of God who is beyond gender. That using predominantly masculine images of God puts God in a box that leads  to male hubris, the domination of women and damages women’s souls. I said that we need women at the table to image the imago dei , the sacred with our holy feminine bodies and I mentioned the overwhelming femicide in the world, and that  the Gospels should also be interpreted from women’s lived experiences.
- In our inclusive communities , the entire community celebrates Eucharist. They are invited to raise their hands in consecration, mutual blessings and to participate in shared homilies. Everyone is welcome at our table including former Catholics, ( 33 million in the US), divorced and remarried and the LGBTQI community.
-The church must make the connection between the discrimination of women in the Catholic Church and violence toward women in the world. Two-thirds of the world’s poor are women and their dependent children.  -I talked about Fr. Roy Bourgeois and named other priests who have supported us.

With a sweep of my hand across my body I motioned that our call to priesthood is a "yes' response to the Spirit.

During this entire time, the Monsignore listened intently and appeared open to our words. He suggested we dialogue with Francis and asked how long we were staying, and gave us each a piece of paper to write our names and phone numbers.

This experience felt like healing balm to my soul after so many years of rejection by the hierarchy. Indeed, the door has opened.
www.arcwp.org

A welcome history of the ordination of women in this 21st century and of the courage and persistence necessary to overcome centuries of hierarchy. A male hierarchy that refuses to recognize women as equals, contrary to the biblical stories of the many women in the life of Jesus.

The words of Pope Paul were not "ex cathedra" that is not infallible!
Canon 1024 can therefore be revisited.

Gratitude to those who continue to petition the institution by word and action to bring the Sophia/Jesus Spirit to fruition by recognizing the ordination women priests.