The SOA Watch Convergence at the Border—also the 27th Annual SOAW Gathering—in Nogales, AZ/Sonora October 7 to 10, was a great success in showing solidarity with those at the border and drawing attention to the militarization there that has such a devastating effect resulting from the economic and political policies being implemented at the border.

Sophie Vodvarka of Call to Action has created videos covering highlights of the two days and :
Part 1 - Introduction, Background (not referenced out of self-promotion) and Rally at the Eloy Detention Center
Our inside look at the SOA Watch’s first ever Convergence on the Border, October 7-10, 2016. Hundreds of activists gathered at the US/Mexico border to bring attention to the dire situation of immigration in the country, including the use of privately run detention centers (like Eloy Detention Center, shown in the film) and the inhumane treatment of migrants. This weekend was special for Call To Action as we joined Progressive Catholic Coalition once again, witnessing the re-birth of a movement which began 25 years ago by our friend Roy Bourgeois. “We don’t cross the border, the border crosses us!”
http://cta-usa.org/video-ministry/

Part 2 - Crossing the Border with Background on Why "SOAW to the Border" by Janice Sevre-Duszynka and interviews with Roy Bourgeois and Jeannette Mulherin
The second part of our inside look at the SOA Watch’s first ever Convergence on the Border, October 7-10, 2016. Hundreds of activists gathered at the US/Mexico border to bring attention to the dire situation of immigration in our country and to witness with love and solidarity.

On Saturday evening, October 8th an Interfaith Service composed by a working group that included three PCC representatives was held at the Border. Included in the service were Indigenous rites and participation of speakers from Jewish, Muslim and Christian traditions, with the PCC representing Catholic input.
The text and list of the speakers is at http://www.soaw.org/border/2016/10/05/interfaith-service-servicio-interreligioso/ 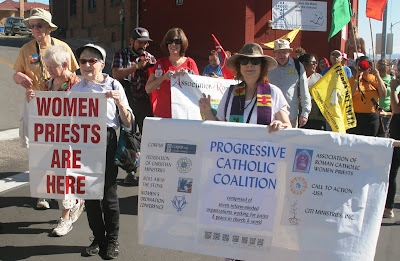 Pictures of the Interfaith Service planned with input by PCC-member representatives Jack Wentland, Janice Sevre-Duszynska and Silvia Brandon-Perez are at

The message presented by PCC as the Catholic voice is at https://www.facebook.com/pcc4churchjustice/

Thanks to our PCC Sponsoring organizations and their representatives Kay, Sophie, Janice, Silvia, Rosa (and Mary and Nick DelRio of CORPUS) for their participation in making the PCC's valuable message for justice!

Please feel free to use any of the information and links above for sharing the event with others. I hope you will share this information with members of your organization sponsoring PCC! Thanks.       ~  jack

--
John P. Wentland
"The role of citizens in our Democracy does not end with your vote.
America's never been about what can be done for us. It's about what
can be done by us together through the hard and frustrating, but
necessary work of self-government." Pres. Barack H. Obama - 11/6/12