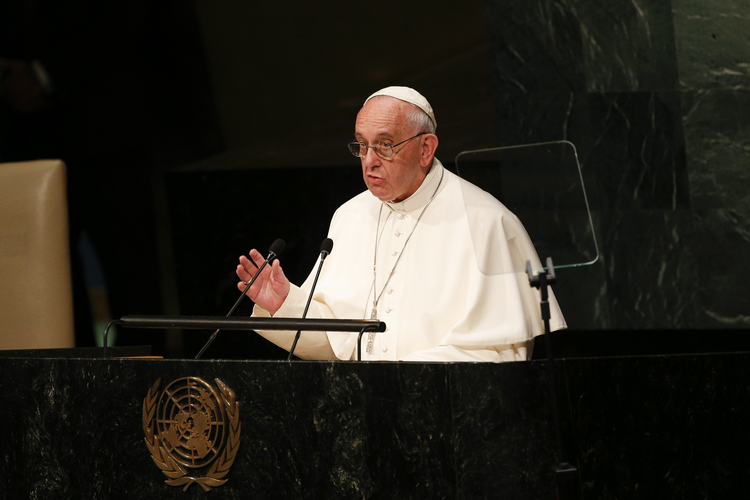 Pope Francis addresses the U.N. General Assembly in New York in 2015. (CNS photo/Paul Haring)
In a landmark statement on nuclear arms on Nov. 10, Pope Francis has categorically condemned not only “the threat of their use” but also “their very possession.”
Nuclear weapons, he told participants at a Vatican symposium on “integral disarmament,” exist “in the service of a mentality of fear that affects not only the parties in conflict but the entire human race.”
His audience included representatives from the United States and Russia. He told them that “international relations cannot be held captive to military force, mutual intimidation and the parading of stockpiles of arms.”
He said that “weapons of mass destruction, particularly nuclear weapons, create nothing but a false sense of security. They cannot constitute the basis for peaceful coexistence between members of the human family, which must rather be inspired by an ethics of solidarity.”
He is the first pope ever to condemn the possession of nuclear weapons since they were initially developed at the end of World War II and then used twice by the United States at Hiroshima and Nagasaki in 1945, causing the deaths of 210,000 people

Posted by Bridget Mary Meehan at 7:59 AM