"How Native American Women Paved the Way for Women's Rights in the U.S" by Kelly Macias 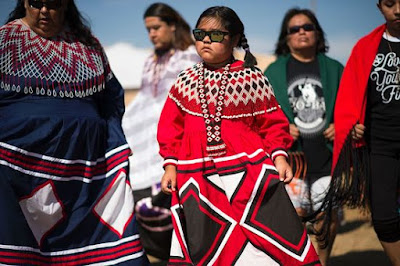 "Two of the earliest founders of the U.S. women’s movement, Elizabeth Cady Stanton and Matilda Joslyn Gage, saw the egalitarian Native model first-hand while growing up in New York, the land base of the Haudenosaunee—a label denoting the five nations of the Iroquois confederacy: the Mohawk, Oneida, Onondaga, Cayuga, and Seneca—later joined by the Tuscarora. Native women were the agriculturalists of their tribes, and from North to South America they collectively raised corn, beans, and squash. Their responsibility for the survival of the Nation, through the creation of life and the food that sustained life, gave women a position of equality in their society that white women could only dream of.

According to Sally Roesch Wagner, Ph.D., the suffragists were inspired by what they observed and learned about Haudenosaunee women, both politically and socially. While white American women at the time were relegated to taking charge at home, with final decisions always being made by their husbands, their Native American counterparts were not only fully in charge in their families but those families honored matrilineal heritage—which meant that children belonged to their mothers, fully and completely.

Issues of paternal rights were totally foreign to the Native world. Haudenosaunee children were (and are) born into their mother’s clan and follow their mother’s line. When Gage tried to explain the concept of an “illegitimate child” to a Haudenosaunee friend, the woman puzzled, “how can any child not be legitimate? You always know who your mother is.”

The living arrangements were traditionally based on this matrilineal system. A husband came to live with his wife, her parents, her sisters and their husbands and children in their matrilineal family longhouse. Unmarried brothers lived there, too, until they married and moved to their wives’ longhouses. If any of the mothers died or the couple split up, the children continued to live in the mother’s longhouse. “The children also accompanied the mother, whose right to them was recognized as supreme,” Gage wrote [in Woman, Church and State], “if for any cause the Iroquois husband and wife separated.”

But that’s not all. Haudenosaunee women also played a role in the political goings on in their respective nations. From discussions on important issues to selecting a chief, women were active contributors to decisions that impacted the well-being of their communities.
“In the councils of the Iroquois every adult male or female had a voice upon all questions brought before it,” Stanton reported in The National Bulletin in 1891. “The American aborigines were essentially democratic in their government … The women were the great power among the clan.” Stanton went on to describe how clan mothers had the responsibility for nominating a chief, and could remove that chief if he did not make good decisions. “They did not hesitate, when occasion required,” Stanton recalled, “‘to knock off the horns,’ as it was technically called, from the head of a chief and send him back to the ranks of the warriors.”
Apparently, not much has changed among these tribes despite the centuries that have passed. Women still play a critical role in their communities, including having the distinction of nominating and removing a chief if necessary. And in recent years, many women have become chiefs themselves. They have also played a vital part in maintaining their culture, history, and heritage and protecting their right to sovereignty—something the United States government has consistently encroached on for hundreds of years. One fascinating thing that Wagner notes is that feminism and women’s rights is a concept that remains distant to the experience of Haudenosaunee women. She writes, “To the Haudenosaunee, [women’s equality] is simply their way of life. Their egalitarian relationships and their political authority are a reality that—for many non-Native women—is still something to strive for.”
Social movements must start with a vision of an alternative future where people are no longer oppressed. Elizabeth Cady Stanton and Matilda Joslyn Gage saw this future for white women because of the Haudenosaunee women they met. Of course, this led to several different waves of feminism that have continued to create a path forward in society which seeks to ensure that all people are respected and valued, regardless of gender identity. So, the next time you think about feminism and its history, remember to include the contributions of the women of the Mohawk, Oneida, Onondaga, Cayuga, Seneca, and the Tuscarora nations. And remember to honor and thank them for the role they played. Without their way of life and the inspiration they provided, who knows what a feminist movement in this country would have looked like."
Posted by Bridget Mary Meehan at 12:32 PM