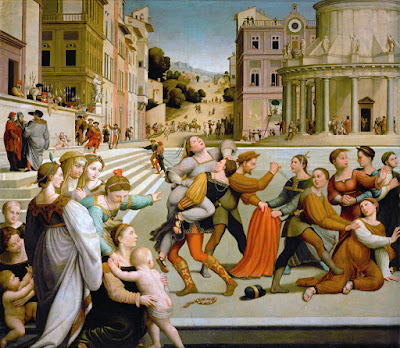 One recent morning I happened across a scene of biblical violence. Flipping through Genesis, tracking down a quotation for a sermon, my eye caught on a chapter heading, "The Rape of Dinah." I paused and turned the phrase in my mind. My heart began to ache. I took a breath, sat back in my chair, and read the story of Dinah.

The Bible tells us that Dinah was the daughter of Leah, and devotes a single sentence to her rape: A prince of the region "saw her, seized her, and lay with her by force."

The rest of the chapter is devoted to the revenge carried out by Dinah's brothers, who barter her off to the prince as part of a strategy to attack his people. They succeed, and kill all the men of his nation. One can only imagine what happened to the women.
In the study bible I've dog-eared and underlined since seminary, I searched the book's notes for some mention of Dinah in all of this, and found one. Among historical references and exegesis, it simply read, "Dinah's reactions go unrecorded."

The myriad writers of our sacred stories, presumably all men, devote little time to women's perspectives. When women appear, we are often mute or nameless, pawns in men's games of war or violence, our reactions "unrecorded." But read between the lines of the Bible and you can detect the narratives of women deleted by uninterested editors, or left untold. Not all of these stories are of sexual assault or abuse, but many are.


There is Tamar, whose half brother meticulously plans her rape, calling in a crony to assist in the scheming. Her father, King David, is angry, but, "would not punish him, because he loved him." Sounds like a story I've heard before - especially considering David has some issues of his own, placing Bathsheba's husband on the front lines of war so that he could marry her himself.

Bathsheba's response to all of this? Unrecorded. She sleeps with the king with no reference to her consent, or lack of it.
There's also the almost unreadable story in Judges 19 of the Levite who pushes his concubine outside the walls of the house to be gang-raped by a lawless mob. By the morning she is dead; the Levite later mutilates her body.

The women of the Bible would be just as unsurprised as I am by the allegations against Harvey Weinstein, Eric Schneiderman or any of their compatriots. They would know, as I have come to realize, that the more vulnerable you are - a child, a woman of color, a foreigner, a slave or a concubine, a transgender man or woman - the more you are singled out to be used and discarded.

Christians owe a debt to scholars like Delores S. Williams and Phyllis Trible who have approached these texts from the victims' perspectives. Dr. Trible labels such stories "texts of terror." But rarely are these stories told in our churches. When we remember that a third or more of the women sitting in our pews have been sexually assaulted and the majority of them have been sexually harassed, the absence of biblical women's stories is telling.

People of all genders in our pews have been subjected to a range of abuses including childhood sexual abuse, while almost half of transgender individuals report being sexually assaulted. I would not wish to have these stories read from the lectern as a simple matter of course (and they certainly should not be held up as Gospel). But of all the Bible's stories, tragically, these "texts of terror" may be more resonant than any others when it comes to the heartbreaking, quotidian violence of the lives of women and gender and sexual minorities.

The muting of the #MeToos of the Bible is a direct reflection of the culture of silence at work in our congregations. An assumption is woven into our sacred texts: that the experiences of women don't matter. If religious communities fail to tell stories that reflect the experience of the women of our past, we will inevitably fail to address the sense of entitlement, assumption of superiority and lust for punishment carried through those stories and inherited by men of the present.

Recently, I attended sexual boundaries training for pastors. The workshop was largely focused on avoiding certain behaviors. "Leave the door to your office open during counseling sessions," we were told. "Don't visit congregants' homes alone." While these are all good and necessary practices that protect congregants and clergy members from harm, I await the day when we will robustly address the roots of abuse.

Statistically, perpetrators do not lurk in shadowy corners, waiting to pounce. They are men who have a hint of power, or wish they did, who understand women in much the same way so many of the stories of the Bible do - as objects to be penetrated, traded, bought or sold. They are sitting in our pews, or, sometimes, standing in our pulpits.

Abuse takes place when one person fails to see the humanity of another, taking what he wants in order to experience control, disordered intimacy or power. It is the symptom of an illness that is fundamentally spiritual: a kind of narcissism that allows him to focus only on sating his need, blind to the pain of the victim. This same narcissism caused the editors of our sacred stories to limit the rape of Dinah to only nine words in a book of thousands.
Refraining from troubling behaviors is not enough; abusive narcissism must be unraveled through a transformation of heart and mind. A shift in the larger culture depends on putting the stories of women front and center. We must create space for them to be heard, not only by women but also by men, who are steeped in a culture that valorizes those behaviors. Seeing women as the rightful owners of their own bodies depends, first, on encountering women as fellow humans.

If I were preaching the story of Dinah, I might simply ask, "How do you think she felt?" It's a question that some men have never considered. Though some abusers are beyond the reach of compassion, I have in my work as a pastor witnessed the ways hearts can open when someone tells a story. It is empathy, not regulations, that will create a different vision for masculinity in our nation, rooted in love instead of dominance. But transformation happens only in the hard light of truth. When we silence the stories of Dinah and her sisters, perpetrators continue to violate. And those who are victimized? Their reactions go unrecorded.

Emily M.D. Scott is a Lutheran pastor and the founder of St. Lydia's Dinner Church in Brooklyn, who is starting new faith community in Baltimore.
Posted by Bridget Mary Meehan at 11:54 AM