Josepha Madigan is Walking in the Footsteps of St. Brigid of Kildare 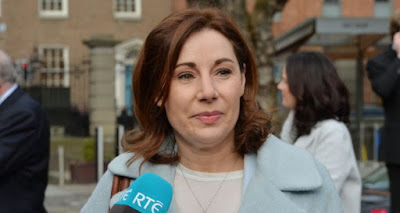 My response to the Irish Times article below: Kudos to Irish Minister Josepha Madigan for her deep faith and love for celebrating Eucharist. She has the spirit of St. Brigid in her soul and in her advocacy for equality.
Yes, Ireland is ready for Women Priests!
If you are interested in finding out more about the path to ordination in the Association of Roman Catholic Women Priests and/or to join a community in Ireland exploring the path to equality in ministry in the Roman Catholic Church, contact me at sofiabmm@aol.com.
Bridget Mary MEEHAN

Minister for Culture, Heritage and the Gaeltacht Josepha Madigan said she is glad she took the opportunity to highlight what she said are inequalities in the Catholic Church.

Archbishop Diarmuid Martin had criticised Ms Madigan for “pushing an agenda” after she helped conduct a church service on Saturday when the parish priest failed to show.

Ms Madigan, who had assisted with the service in Mount Merrion in Dublin said afterwards the Church should ordain women and allow priests to marry. A failure to adapt would lead to a “severe decline” in church participation, she said in an interview on Monday.

In a strong rebuke of her comments, Archbishop Martin said on Tuesday the Minister had provoked “considerable distress” among churchgoers and ought to consider the upset she had caused.

“Many [parishioners] have contacted my office to express their hurt and upset at the Minister’s comments, as reported in the media,” he said in a statement.

Ms Madigan responded by saying she was disappointed by the personal nature of Archbishop Martin’s statement and said she intended to raise her concerns with Pope Francis when he visits Ireland next month.

“If I did not use this opportunity to highlight the inequalities I see in the Church then I would be turning a blind eye and I am not prepared to do that,” she said.

“The only agenda I am pushing is equality in the church just as I believe there should be equality in all facets of society. Although women play a role in the operations of the church, including my own parish, I believe the church has to change to reflect society as it is today,” she said.

Ms Madigan said she had never claimed to have “said mass”. “That was a newspaper headline. We simply carried on the service the best we could. I would ask this question of Bishop Martin; what advice would he have given me and my two colleagues last Saturday evening other than cancel the mass?”

She said the weekend “incident” in the church was “not of my making. The circumstances just happened. I don’t know what the Archbishop expected us to do. There was a packed congregation. Were we just meant to leave the church? Not carry on with the service? I never claimed I said mass and would never attempt to do that.”
Quoting Edmund Burke, she added: “All it takes for evil to flourish is for good men to do nothing. If I didn’t address these issues when I have the platform then I wouldn’t live with myself in all good conscience”.

In his statement, Archbishop Martin there was no shortage of priests in the Archdiocese of Dublin but that there had simply been a misunderstanding regarding the parish of Mount Merrion service on Saturday evening.

“It is in no way correct to say that the Minister ‘said Mass’,” Archbishop Martin said.

“It is regrettable that Minister Madigan used this occasion to push a particular agenda. Her expressed view that a mix up in a Dublin parish on one particular Saturday evening should lead to the Universal Church changing core teachings is bizarre.

“Minister Madigan might consider listening to the voices of those people who disagree with her public comments, she might consider the hurt she has caused to parishioners who deem her actions deeply disrespectful.”