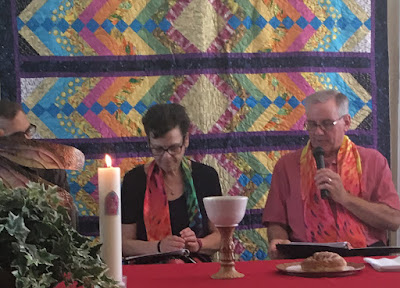 Julie Corron and Dennis McDonald, ARCWP, led the Upper Room Liturgy with the theme of WomenSpirit Rising in celebration of the women prophets, mystics and rebels who understood the message of Jesus and followed faithfully in his footsteps. “We stand on their shoulders as we faithfully live the Gospel.” 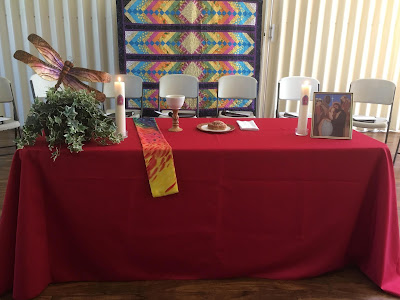 Prayer for Peace: Let’s begin with a moment of peace. If everyone could close their eyes. Take a moment and bring your awareness to your breath. Take a deep breath in and then sigh it out.

Repeat these words silently to yourself: May I know peace.

Now bring your awareness to those sitting in the circle around you here at the Upper Room this morning. Silently send this wish to everyone here: May you know peace as I wish to know peace.

Finally, let your awareness widen out so that you can send this wish to all beings everywhere: May you know peace as I wish to know peace.

Take a deep breath in and out. When you’re ready, you can open your eyes.

First Reading: The Elephant in the Church by Mary T. Malone, Theologian

Throughout Christian history it has always been recognized that the home is the place where Christianity is passed on, and that women, mothers and grandmothers, have been the prime evangelists. Now in the twenty-first century, homes may no longer function as centers of evangelization. The old headship of the male husband and father is no longer a reality, and the male leaders of the churches are diminishing in numbers.

And yet the women are still there, and this is the problem. And what of the women down through the centuries? How were they ‘there’. As we have seen, they were there among the first and most faithful disciples, as house-church leaders, apostles, teachers, prophets, and presiders at the agape meal, the initial form of Eucharist. They were there, to men’s great surprise as martyrs and virgins, not having been deemed capable of either role in male theology. They were there as abbesses and founders, writers and preachers, mystics and scholars, reformers and missionaries, not only at home on the continent of Europe, but in far distant lands, again demonstrating virtues of courage and ingenuity that they were not supposed to have. And in our own time women have been there as theological scholars and biblical exegetes, parish leaders and pastoral guides, chaplains in a huge variety of settings, and ministers of the gospel at bedsides and graves, birthing rooms and schools, publishing houses and universities.

And all of this has been done entirely on their own initiative, without any official calling from the Church because the Catholic Church does not consider itself capable of calling women. And what have these women believed? How have they lived as Christians? What has been the focus of their spiritual lives? Have they seen themselves as the second to be created and the first to have sinned or as more prone to heresy? These women, both today and down through the centuries, right from the beginning, have built their lives around the following of Jesus, the living out of the imago dei, the public exercise of compassion and the unique sense of themselves as Godward and God-bearing people. They know that in the depths of their humanity, like Jesus, they discover the signs of divinity. They have learned, as Marguerite Porete, and Teresa of Avila have pointed out, that there is no telling where God ends and we begin, where we end and God begins. They know, as Julian of Norwich did, that there is ‘no wrath in God’, that God is ‘closer to us than our hands and feet’, and that God is as truly Mother as God is Father.

They know that the Spirit of God inhabits their lives as tides lurk in the sea, coming and going, rising and falling, but always present. And above all they know that love is the meaning of everything, It is obvious that Christianity has travelled through the centuries on two paths, one recognized, acclaimed and celebrated in word and liturgy, the other hidden, often reviled, unrecognized and uncelebrated. If there is to be a future church, these two paths will have to meet. It is not at all clear how this is to be done, but a necessary first step must surely be to attend to the voices of women throughout history and today.

But perhaps on an even more important level, the experience of the ordinary day-in, day-out women of Catholicism, can begin to be respected as among the primary bearers of the Faith, and respected, heard and treated as the significant theologians that they are. They can also be recognized and respected as the foundation stones of many a parish community, for without the presence and ministry of women, these communities would not exist. For women have always done theology, and ministry, in both word and deed. This is not to exclude lay men, but at least they can move freely in the male symbolic universe that is Catholicism. Women have had to create their own religious universe, and it is the uniting of these two universes, practically unknown to each other, that will save the Church of God in our time."

These are the inspired words of Mary T. Malone and the community affirms them by saying, Amen.

A reading for the Gospel of Mark

After leaving there, Jesus came into his own town, followed by the disciples. When the sabbath came, he began to teach in the synagogue, and the many listeners were astonished and said, “Where did he learn all this? What is this wisdom that has been granted, and these miracles that are performed by his hands? Isn’t this the carpenter, the son of Mary, the brother of James and Joses and Judah and Simon. Are not his sisters here with us?”

They found these things to be stumbling blocks. Jesus said to them, “Prophets are not without honor, except in their hometowns and among their own relatives and in their own households.” And he could work no miracles there, apart from laying his hands upon a few sick people and healing them; their lack of faith astounded him. He made the rounds of the neighboring villages instead, and spent the time teaching.

These are the inspired words from the Gospel of Mark and the community affirms them by saying, Amen.

In our first reading, Mary Malone describes the situation we know so well, that of the dedicated, relentless really, work that women are doing in the Catholic Church, as she says, “without any official calling from the Church because the Catholic Church does not consider itself capable of calling women.” Yet as I look around this morning, I see the faces of many women who have heard, and answered, the call. Men too. Women, however, are the ones most likely to be met with the sort of skepticism that greeted Jesus in Nazareth. The words used today are a little different perhaps, more like "Who does she think she is?" or "What does she think she's doing?" or "What do you mean, a woman priest?"
It’s telling that even Jesus found this kind of reaction daunting. "And he could work no miracles there...." So he left his hometown and went to neighboring villages instead. That's a luxury that Catholic women have never had. There's no leaving town for us. For me, that's the most exciting part, that we're doing our work of living and teaching the gospel right where we are, invited by the Church or not, recognized by the Church or not. And now, by answering the call, we're bringing the Church, skeptical neighbors and relatives and all, into the future with us.
What did you hear?
What will you do?
What will it cost you? 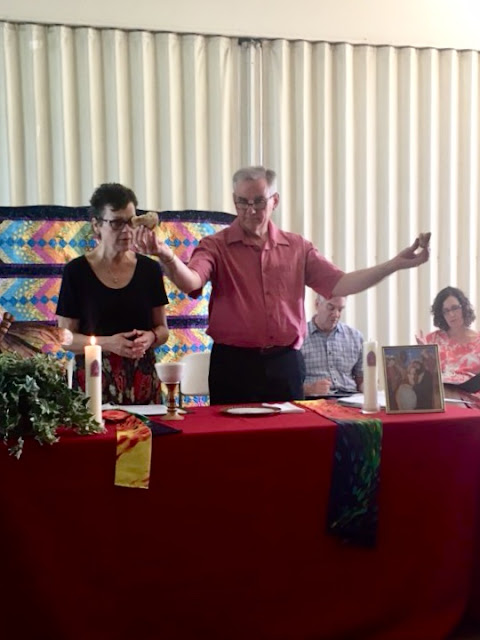 From the Eucharistic Prayer by Jay Murnane:

O Holy One, You give us life, and we live and breathe with your Spirit. You create us female and male; You call us good, and we live as equal partners. You share the earth with us, and we, as co-creators with you, complement your ongoing activity of creation.

Among all our blessed ancestors, we celebrate the women who gently and firmly confronted the structures of oppression in their times with unique vision and compassion: Sarah, Deborah, Judith, Miriam, Ruth, Esther, Anna, Miriam of Nazareth, Julian, Hildegard and so many more. 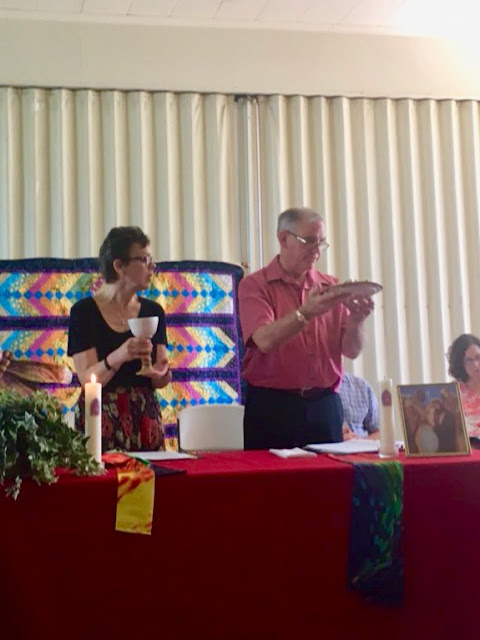 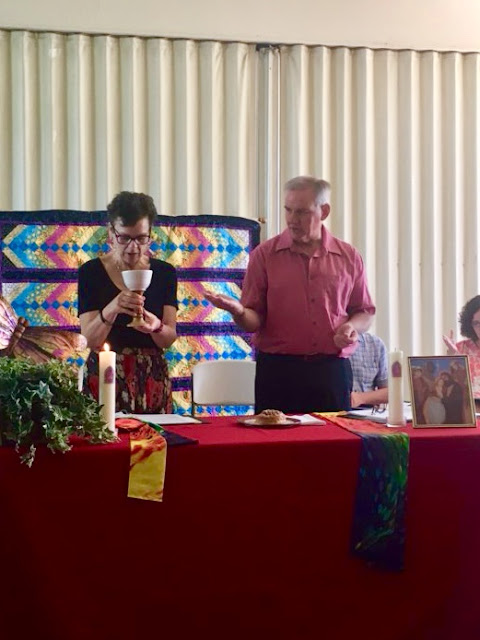 Communion Song: Who Will Speak by Marty Haugen
https://youtu.be/7cfBWjltR0A

May our hearts be open to extend love to all we meet. May we leave this holy circle committed to serving others and sharing the Spirit of Peace. Amen