Pope Francis Calls a Summit of Bishops to Deal with Sexual Abuse Crisis at Vatican in Feb. 2019, How About a Council of the People to Tell the Truth and Drop the Pontifical Secret? by Bridget Mary Meehan ARCWP 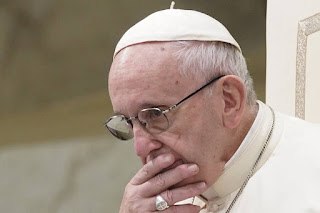 Sexual Abuse Crisis:
Pope Francis has called 130 bishops from around the world to a summit in February 2019 in response to the Catholic Church's child sexual abuse crisis.  How can 130 bishops solve the problems that the hierarchy has covered up for centuries?  This is akin to the old cliche: don't expect a fox to guard the henhouse! Rather, Francis should convene a Council of the People of God including survivors and family members of sexual abuse. This Council could have representatives from parishes round the world as well as alienated Catholics who have suffered harm from the abuse of power by priests and bishops. Their mandate could cover creating effective policies and participating on tribunals that would dismiss bishops who covered up sexual abuse in the Church. This inclusive gathering would help to dismantle toxic teachings and clerical practices that caused the sexual abuse crisis like the "pontifical secret."It is long past  time to open up the secret Vatican and diocesan files and tell the truth. Only then, will the Church be set free and live Jesus' teachings.  Bridget Mary Meehan ARCWP, https://arcwp.org
https://www.catholicnewsagency.com/news/what-is-the-pontifical-secret-78234

..."Materials covered by the pontifical secret include diplomatic communications made between the Vatican’s nunciatures around the world, but also apply to a range of other subjects. These include private dossiers and recommendations on priests and bishops being considered for promotion. Controversially, the secret also covers penal processes concerning major crimes handled by the Congregation for the Doctrine of the Faith, including cases involving the sexual abuse of minors.
The reasons why the secret is applied to different materials depend upon the circumstances. Private communications between what are effectively papal embassies and the Vatican’s Secretariat of State are protected by confidentiality in the same way, and for the same reasons, that other diplomatic correspondence is kept classified. Files pertaining to bishops or prospective bishops are handled in much the same manner as confidential personnel matters are treated in companies or other institutions.
In judicial cases, the secret is meant to protect the privacy of victims, the good name of the accused (at least until they are convicted), and even the confidentiality of the accusers, who might be under the authority of someone under investigation.
Concerning the case of Archbishop McCarrick, Vatican files could conceivably contain materials covering all of these categories. In addition to possible penal processes and the circumstances surrounding his various promotions - including what was known about his behavior at different times - records could also concern any work undertaken by McCarrick as a papal envoy in different places including, for example, China.
As the name “pontifical secret” implies, it is only the pope - or someone empowered by him - who can dispense from it. Those hoping for curial officials to act on their own initiative, even for the supposed good of the Church, are likely to be disappointed. If they were to do so, they could find themselves subjected to disciplinary measures in the same way that any government official might if they were to release classified documents without authorization.
The seriousness of any violation of the secret by curial officials in relation to McCarrick’s case would depend on the nature of the material disclosed."
See also article on Australian priests demanding end to mandatory celibacy. Bridget Mary Meehan ARCWP, https://arcwp.org