National Catholic Reporter Editorial: US bishops need to confront US president on inhumane treatment of immigrants 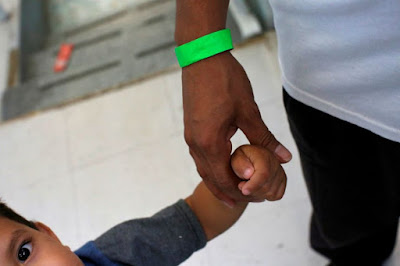 Last week, our national bully-in-chief threatened to deport millions and leave behind children who would apparently have to fend for themselves. Fear ran through immigrant communities and those who have come to rely on them for their work and service to parishes and schools.
Meanwhile, visitors to migrant detention camps on the border noted appalling conditions, where children were left to sleep on concrete floors, without blankets, toothbrushes or soap, and where the stench of unchanged diapers pervaded the air.
Speaking for the bishops, Bishop Joe Vásquez, of Austin, Texas, chair of the Committee on Migration, issued a statement which began, "We recognize the right of nations to control their borders in a just and proportionate manner."Writer Michael Scott Moore tweeted that even when he was a captive of Somali pirates, he was offered showers and a toothbrush. In other words, Somali pirates offered more humanity than the U.S. government does for migrant children.
President Donald Trump later delayed his massive deportation threat, with Immigration and Customs Enforcement officials noting that many of the plans had already been leaked (of course they did not mention their chief, the prime leaker who sees threatening such actions as political gold with his base of voters).
But June 22, into this swirl of infamy a statement was issued to represent the U.S. bishops, who know well that those threatened are the most youthful and vulnerable slice of their flock.
Did they send a rousing message? Urge their priests and parishioners to organize civil disobedience to protect families? Ask, in the spirit of St. Ósscar Romero, for ICE officers to refuse to participate? Maybe sponsor a national collection to distribute fresh toothbrushes and diapers? Shout out, "Enough already"?
Not so. They took the milquetoast, "on the one hand this, on the other hand that," approach. In the midst of the crisis, they took pains not to offend those public officials, particularly the president, who have instigated this national disgrace.
Hint: In journalism, it's the lede that signifies what's most important. Vásquez chose to bury what needs to be addressed at this time.
The statement said that "broad enforcement actions instigate panic in our communities and will not serve as an effective deterrent to irregular migration." It added, "we should focus on the root causes in Central America that have compelled so many to leave their homes in search of safety and reform our immigration system with a view toward justice and the common good. We stand ready to work with the Administration and Congress to achieve those objectives." It concluded with an offer of prayers for everyone involved.
It was a statement few could object to. And that is the problem. The statement was so small and matter-of-fact that it was understandably ignored in most quarters.
Next time, in moments of national crisis such as this, the U.S. bishops should take the example of their boss.
Pope Francis has raised the specter of racism in the anti-migrant policies pursued around the world. He has equated the church's respect for migrants with concern for the unborn.
Perhaps the body of bishops could listen to the more prophetic of their fellows, particularly those on the border who confront this crisis every day.
"I feel that as a [bishops'] conference, we must express ourselves more strongly when it comes to the dignity of immigrants, to say that they are not criminals, that they are vulnerable families," Bishop Daniel Flores of Brownsville, Texas, told Catholic News Service June 12. As a faith community, said Flores, Catholics are called "to defend the migrant as a human being, to not cast the person aside as someone who doesn't matter and is a problem."
Support for the dignity of migrants can only begin once the bishops as a group stop hedging their language and openly confront the inhumane immigration policies flowing from this administration. Next time the president attempts to use migrant children and parents as political pawns in some grand, sick electoral scheme, they should fearlessly confront the bully-in-chief. That is, if they are to take their position as faith leaders seriously.
Posted by Bridget Mary Meehan at 3:20 PM