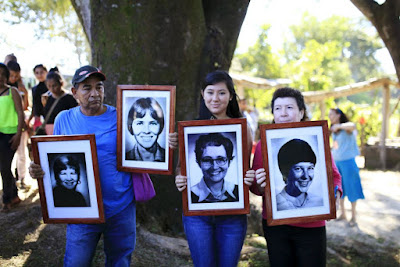 My Response: In addition, I'd like to see Pope Francis affirm Ita Ford, Jean Donovan, Maura Clark, and Dorothy Kazel, as well as the many unnamed people who worked for justice as icons for the poor and models of courage, saints in the Roman Catholic Church.

"The deaths of four U.S. churchwomen in El Salvador on Dec. 2, 1980, awakened the church and the nation to the violence exploding throughout the country and much of Central America. Here is a look at their lives."

"Rutilio Grande and two lay Salvadorans were killed "in hatred of the faith".
This means they will be beatified without the customary need for a miracle to be attributed to them. Beatification is the last step before sainthood.
Grande, who was outspoken in his defense of the poor, was shot more than dozen times along with an elderly man and a teenager on March 12, 1977 by a right-wing death squad in rural El Salvador while they were riding in a jeep."