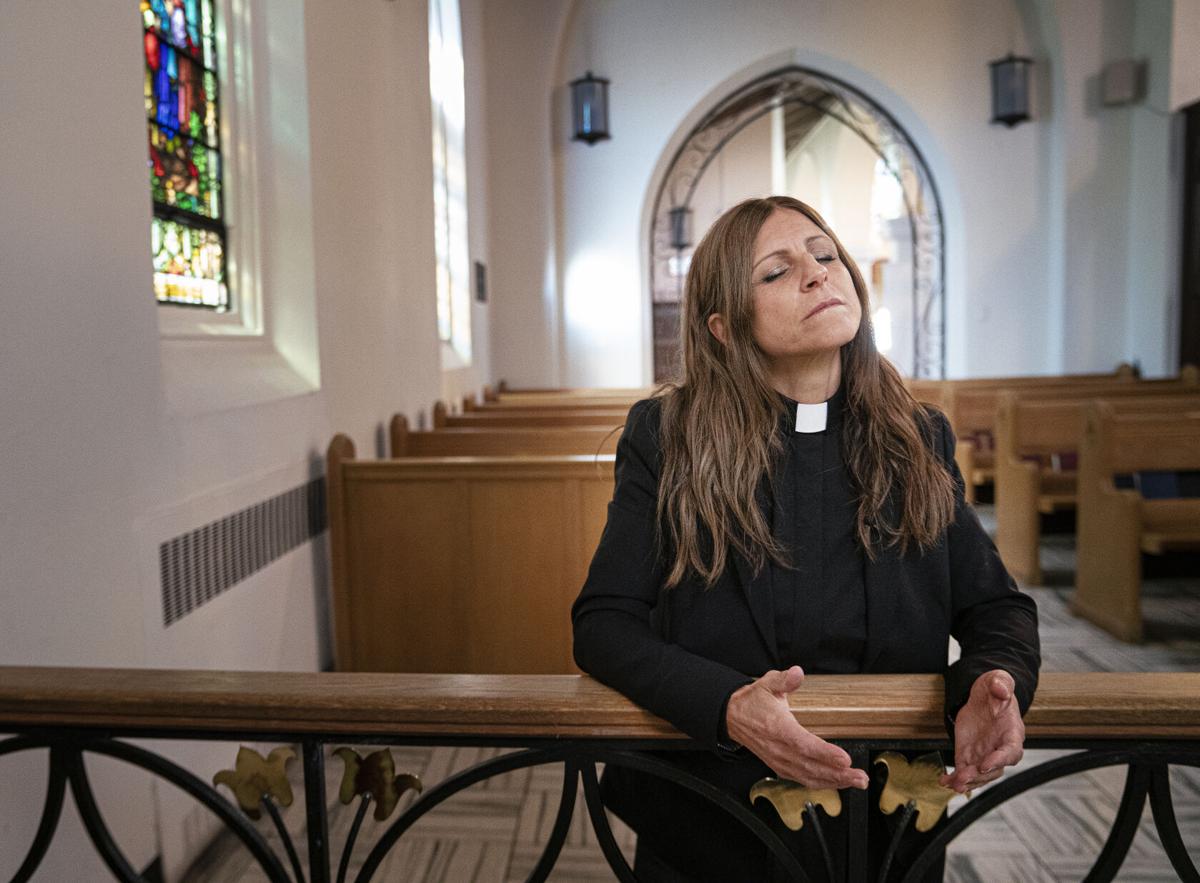 Anne Tropeano takes a moment to pray Friday before people arrive for the rehearsal for her ordination ceremony at the Cathedral of St. John in Albuquerque. Tropeano will be ordained Saturday as a Catholic priest, then automatically excommunicated from the Church. 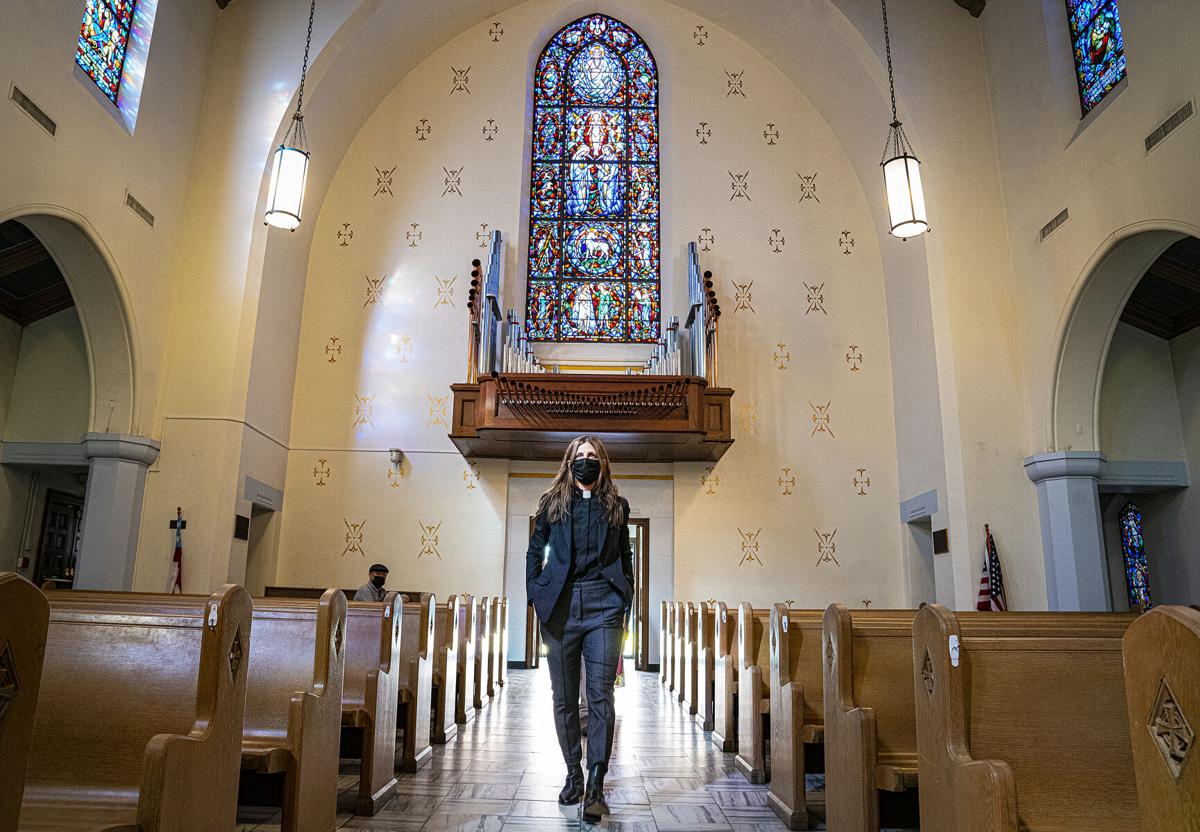 Anne Tropeano walks down the aisle towards the altar Friday during the rehearsal for her ordination ceremony at the Cathedral of St. John in Albuquerque. On Saturday, Tropeano will be ordained as a Catholic priest, then automatically excommunicated from the Church. 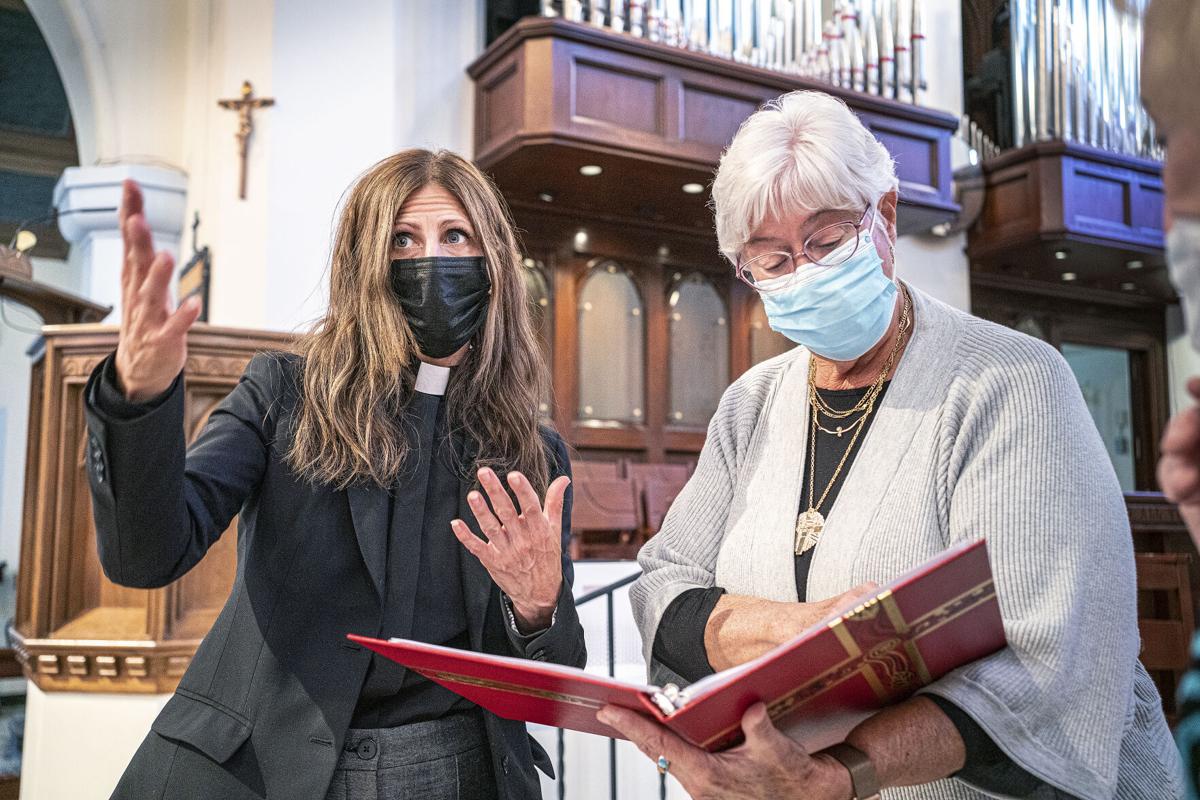 Anne Tropeano and the Rev. Mary Theresa Streck do a walk-through Friday during rehearsal for Tropeano’s ordination ceremony at the Cathedral of St John. On Saturday, Tropeano will be ordained as a Catholic priest, then automatically excommunicated from the church.

Anne Tropeano is set to be ordained Saturday as a Catholic priest, then automatically excommunicated from the Church.

Tropeano, a 47-year-old grants manager with the United Way of Central New Mexico, insists she has been called by God to the priesthood.

She said this week her planned act stems from frustration with the sexism of the Catholic Church but not from a desire to damage the institution. Tropeano said it’s not a stunt — that she wants to shed light on the question of women’s ordination, spur conversation and ultimately reform the Church.

“This is the road that God is asking me to take — to be a reformer,” she said in a phone interview.

Nearly 250 women have been illicitly ordained as Catholic priests since 2002, and there has been a growing push for women in the priesthood over the past 20 years, the Women’s Ordination Conference in Washington, D.C., said. Nevertheless, popes past and present oppose the movement.

Pope Benedict XVI called more than 10 years ago for automatic excommunication of both women who are ordained and the bishops who oversee the ceremonies. Excommunication means a person is no longer in communion with the Church and basically represents expulsion.

Pope Francis recently backed Benedict’s ruling, although he does have a commission analyzing the role of female deacons.

Kate McElwee, executive director of the Women’s Ordination Conference, said questions about the topic of women’s ordination have been around a long time. “And there’s a growing grassroots movement and a more vocal movement,” said McElwee, who plans to attend Tropeano’s ceremony.

The ordination is set for 2 p.m. Saturday at Cathedral of St. John, an Episcopal cathedral in Albuquerque. Tropeano’s website states “all are welcome” at the event. Bridget Mary Meehan, a female priest from Florida, will oversee the ceremony. Meehan is the first member of the Association of Roman Catholic Women Priests to be called a bishop.

Tropeano said she has attended two retreats put on for lay people by Archbishop John Wester of the Archdiocese of Santa Fe and admires him.

“I want to have a dialogue with Archbishop Wester,” she said. “He’s just, like, the real deal. He’s a good, good holy man. Maybe eventually we’ll talk. It’s really up to him.”

The Rev. Glenn Jones, vicar general of the Archdiocese of Santa Fe, said through an email that Pope Paul VI noted in 1976 that Jesus chose only men as apostles. The Catholic Church, in part out of respect for that example, doesn’t consider itself authorized to admit women to the priesthood, the pope said.

Jones wrote, “Thus, the Roman Catholic Church does not see attempted ordination of women as valid and, indeed, is an excommunicable action.”

Tropeano already goes by the name “Father Anne.” Her Gmail handle is “vaticanreject.” One of the photos on her website shows her in a clerical collar, throwing a karate kick at the camera.

She is far from grave and chats cheerfully. She said she had a boyfriend for 12 years and managed a rock band for five years, but those activities were from a different era. She discovered New Mexico while touring with that band, called TapWater, and moved to Albuquerque three years ago because she loves the area, she said.

“She’s such a go-getter,” said Melissa Fox, her boss with the United Way based in Albuquerque. Fox said she didn’t think Tropeano’s activism in the Catholic Church would pose a challenge for the United Way, “because she’s so well respected.”

Although baptized a Catholic, Tropeano didn’t practice the faith early in her life. She was gradually drawn to it starting about 14 years ago while living in San Diego and later Portland, Ore. She began attending Catholic churches, then assisting them, then served as a pastoral administrator, helping run the business of parishes in Portland and Tacoma, Wash.

She attended the Jesuit School of Theology in California and received a master’s degree in divinity four years ago. The Jesuits, a Catholic order known for educational endeavors, taught her how to pray, helped her “see the meaning of life” and enabled her to “develop a spiritual practice that has led to a deep relationship with God,” she said.

“Yes, the Church is sexist, and obviously it has a lot of problems,” she said. Women who are ordained as Catholic priests are excommunicated, she said, while priests who have sexually abused children lose their jobs but typically aren’t excommunicated.

Still, she said, “It’s also the beautiful institution that is on fire with God’s love.”

Videos on her website, fatheranne.com, show her delivering short homilies in gray and black apparel and a priest’s white collar. She typically wears big glasses in the videos and has a natural delivery.

“God has given me that gift,” she said.

In one video, she says: “Our patriarchal societies across the world still suffer from the idea — the big lie — that maleness is superior, more competent, more gifted and women are to be sexual playthings, disposable.”

Tom Kelly, professor of systematic theology at Creighton University, a Jesuit institution in Omaha, Neb., said the Church is divided between those who want to maintain the status quo and those “who say if you don’t change, you die.”

Kelly, a Catholic, said Pope Francis has commissioned a group to examine the history of female deacons in the Church. Deacons aren’t priests, but attaining deacon status often is a step toward becoming a priest.

Kelly said that in Latin America, where there aren’t enough priests to meet demand, female lay ministers wear robes, give homilies and oversee baptisms and funerals.

“I see no theological reason why women cannot be ordained,” Kelly said. “I think it’s a disservice to the Church and a disservice to women to not allow them to take their full place, personally.”

“She’s going to shake and move the Catholic Church — I hope,” Koppel said of Tropeano. “We’re excited to collaborate with Father Anne and invite the spirit to continue to guide the Church into what it should be.”

Many other denominations allow women to lead, but Tropeano said she didn’t want to convert to one of those.

“None of us do it lightly,” she said of the women who seek Catholic ordination.

Acquaintances have distanced themselves from her, she said. And online, “People feel entitled to message me and call me a false prophet and tell me I’m the devil.”

Tropeano said for many years she has felt called by God to become a priest. She said she wondered at the time if she heard him accurately.

But as years passed and her spirituality deepened, she said, she decided she had interpreted the message correctly.

She said she could be a priest for hire, one who oversees retreats and weddings.

In the long run, though, she wants her own congregation. She wants to be a full-time priest.

Posted by Bridget Mary Meehan at 10:33 AM