Excellent, thought-provoking article in America:"I considered myself a pacifist. Then Russia invaded Ukraine, and I had some questions" by Doug GirardotDoug Girardot

On Wednesday, Russian police arrested 77-year-old Yelena Osipova, a well-known activist and artist who survived Nazi Germany’s Siege of Leningrad as a baby, at a protest in St Petersburg as she held signs calling for nuclear disarmament and urging soldiers to lay down their arms. On the same day in Moscow, five school children ages 7-11 were detained for hours along with their mother for holding anti-war signs as they attempted to lay flowers at the Ukrainian embassy.

For this upcoming International Women’s Day (Tuesday, March 8), we ask you to add your name to the feminist open letter expressing solidarity with Russian anti-war protestors calling for peace amid the devastating war in Ukraine. 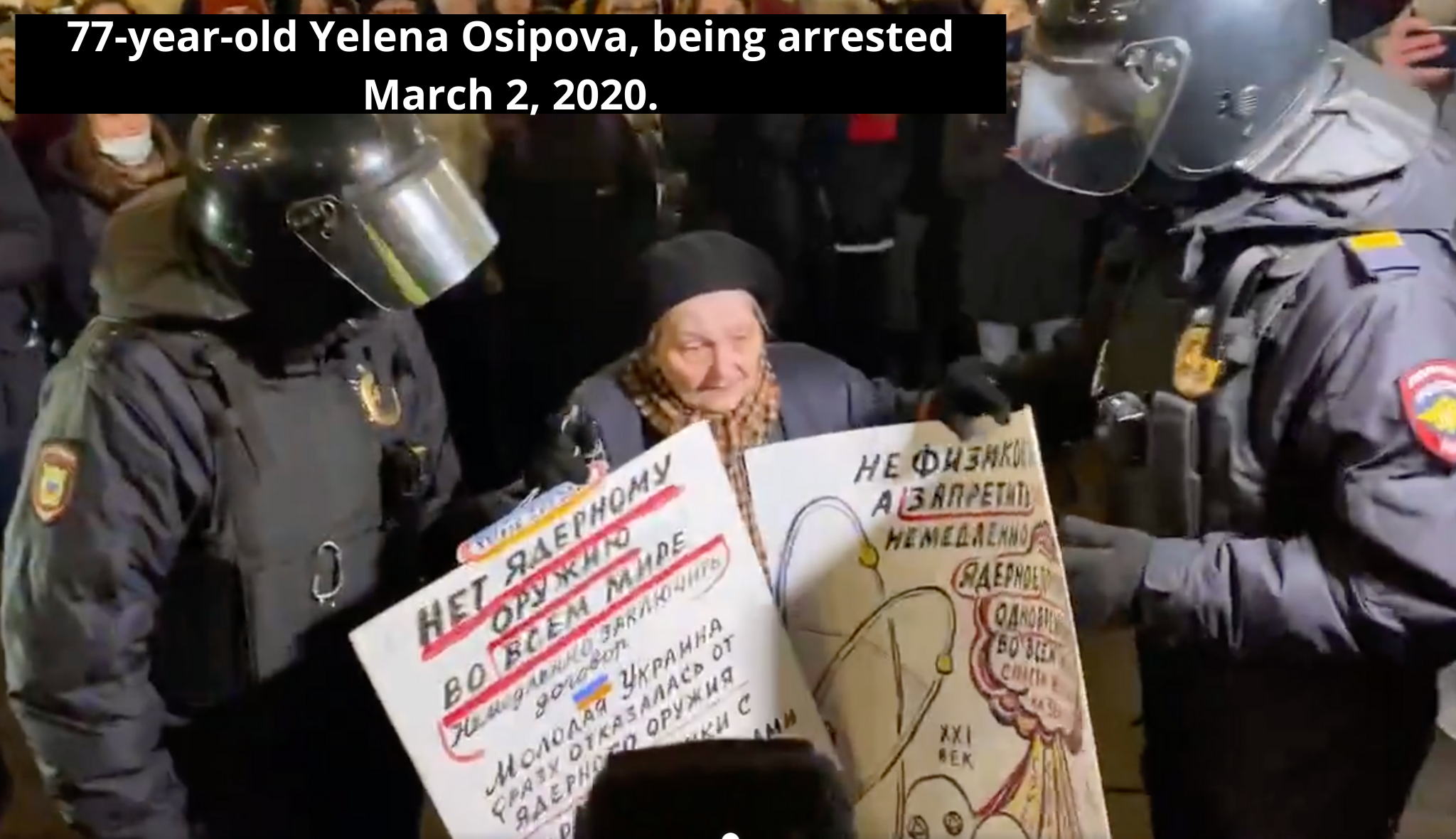 CODEPINK formed at the beginning of the Iraq war as we watched the U.S. wreak horrific destruction, take lives and livelihoods, and perpetuate endless cycles of violence. We knew that we must be in the streets. Now, as Russian missiles wipe out homes, medical facilities, and schools in Ukraine and we see the incredible resistance from the Ukrainian people, we are watching the Russian people take to the streets of Moscow, St. Petersburg, and other Russian cities in peaceful protest despite the repression they face from police and Russian civil authorities. Over 8,000 Russians have been arrested so far. We are so inspired and we join their call for an end to the Russian invasion.

Tomorrow, Sunday, March 6, we and our partners in Europe are holding a global day of action to stop the war in Ukraine and call for no NATO expansion. Find or organize a protest in your city here.

As we oppose the brutal war being waged today in the name of the Russian people, we are also aware of the role the U.S. government and NATO have played in stoking the geopolitical crisis that led to this war. We oppose NATO expansion and believe that Ukraine should be a neutral country.

Like our Russian sisters and brothers, we are terrified that this conflict could spin out of control and result in a nuclear war. The U.S. and Russia together hold 90% of the world’s nuclear weapons, posing an existential threat to planetary survival.

We are also concerned about the imposition of sanctions aimed to cripple the Russian economy. We have no problem with taking yachts and private jets away from oligarchs, but sanctions that hurt millions of ordinary Russians, and impact the entire global economy, are cruel and counterproductive.

Join the open letter of solidarity with Russian anti-war protestors.

International Women's Day is a global day celebrating the social, economic, cultural, and political achievements of women. As you know, there can be no greater achievement than building a peaceful world.

We have had enough of senseless wars that destroy lives and communities while lining the coffers of weapons manufacturers. We’ve seen too many attacks on civilians from Yemen to Gaza to Ethiopia to Ukraine, and we’ve watched in horror as precious resources are poured into wars while families' basic needs for food, shelter, education, and healthcare go unmet and climate change threatens all life on our planet.

Join us as we stand with the people of Ukraine and the protestors inside Russia to say: Stop the War! Russian Troops Out of Ukraine! Ceasefire Now! No NATO expansion! Peace Talks NOW!

Posted by Bridget Mary Meehan at 11:52 AM