In June 2018, more than 200 women gathered in Dublin for a special two-day event. Many of the women were elderly and accompanied by family and caregivers. Some were returning to Ireland for the first time since emigrating long ago. The women were welcomed at a reception by Irish President Michael Higgins and attended a formal dinner with the Lord Mayor of Dublin Mícheál MacDonncha. But the highlight was a roundtable listening exercise, in which 146 of the women gave testimonials for a report.

The first words of the report are by a woman known only as Charlotte: "I'm still there."

"There" is a nursing home on the grounds of a former Magdalene laundry, a convent-run institution where Charlotte was admitted more than 40 years ago to work — without pay or allowance to leave of her own will. Charlotte is not, nor ever was, a religious sister. Like the other women at the Dublin event, she is among the more than 10,000 women and girls who were institutionalized in religious-operated laundries in Ireland between 1922 and 1996, when the last Magdalene laundry closed.

As Charlotte's statement makes clear, the trauma inflicted by the laundries lasts to this day. Thanks to Ireland's monumentally unwise marriage between church and state upon its independence in the early 20th century, the code of the country remains one of secrecy and denial. Even the act of acknowledging the women of the Magdalene laundries, much less honoring or seeking transformative justice for them, has required immense advocacy work. 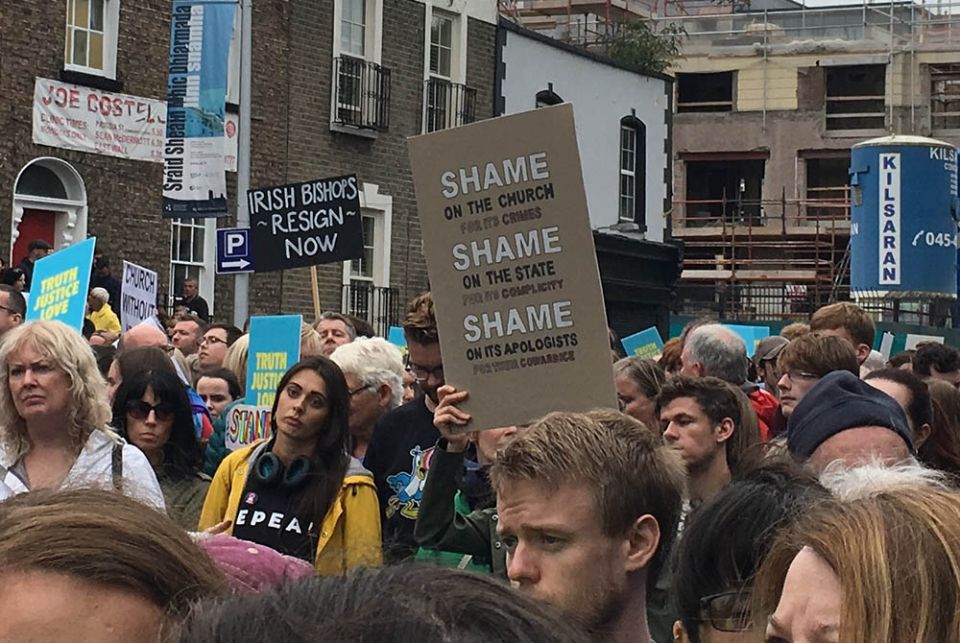 Demonstrators in a Stand4Truth rally for victims of abuse in the Catholic Church processed to a former Magdalene laundry in Dublin on Aug. 26, 2018, holding signs demanding justice from the church and the Irish state. (NCR photo/Jamie Manson)

The "Dublin Honors Magdalenes" event and its listening exercise report were organized by Justice for Magdalenes Research, an advocacy group formed in 2003. Ireland and the Magdalene Laundries: A Campaign for Justice details the group's efforts to gain apologies to Magdalene survivors from both the Catholic Church and Irish state, financial redress and comprehensive health care for survivors, and access to church and state archives for survivors seeking their personal records.

Some of Justice for Magdalenes Research's efforts have been successful, while others have been complicated by the Irish government's bureaucratic obstinacy and by continuing church secrecy. The book is thus intended as a social justice model that "merges academic, advocacy, and activism."

The book complements the organization's website, which documents the group's interaction with church and state officials and includes survivor testimonies. This work offers a compelling example of a citizens' archive — or "guerilla archives," as described by member Claire McGettrick — that challenges the "knowledge suppression" of church and state.

Justice for Magdalenes Research has five members, led by survivors. Founding member Mari Steed was born to a woman who spent much of her life in Irish institutions, including a laundry, for the "crime" of bearing a child out of wedlock and having been born "illegitimate" herself. In the book's foreword, Steed writes of her mother's and grandmother's histories in County Cork and of being adopted out to a family in Philadelphia, only to repeat the cycle of being shamed and shut away in a Catholic-run home when she became pregnant at 17. 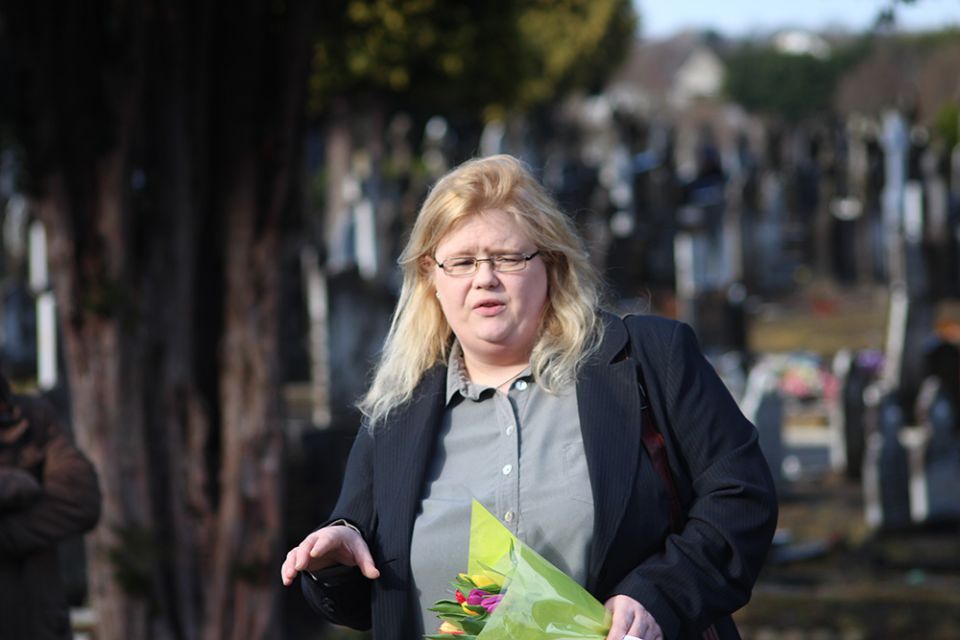 Many years later, Steed decided to seek out her daughter, birth mother and family records. "Obstruction, secrecy and lies greeted me at every turn," she writes. Steed documented her journey on a blog, which led her to connecting with two other Irish adoptees, Angela Newsome and McGettrick. Together they founded Justice for Magdalenes Research.

McGettrick remains a member and has co-founded an activist group for adopted people's rights, Adoption Rights Alliance. She also coordinates two joint initiatives: the Magdalene Names Project, which draws on archives and graves research to document the lives of women who lived and died in the laundries, and the Clann Project, a truth and accountability initiative co-directed by fellow Justice for Magdalenes Research member Maeve O'Rourke. O'Rourke, a human rights lawyer in New York and Britain and a lecturer at the Irish Centre for Human Rights in Galway, Ireland, proved crucial in the tactic of presenting survivor testimony to the United Nations Convention Against Torture.

Justice for Magdalenes Research's members also include Katherine O'Donnell, an associate professor at University College Dublin who has led and organized archival and oral histories of the Magdalene laundries, including the listening exercise report at the "Dublin Honors Magdalenes" event, and James Smith, an associate professor at Boston College whose book, Ireland's Magdalen Laundries and the Nation's Architecture of Containment (2007), was the first history of the women in these institutions in the 20th century.

A big part of Justice for Magdalenes Research's work has been reminding Ireland's government, religious congregations and wider society that survivors still live among them, that the testimonies of women in the Magdalene laundries are not just "stories" or shadowy anecdotes from a distant past.

As part of a delegation of survivors from "mother and baby homes," Maeve O'Rourke speaks to members of the European Parliament and representatives of the European Commission and Amnesty International in Brussels on Sept. 9, 2014. (Flickr/Sinn Féin)

When the case of Magdalene survivors was brought before the U.N. Convention Against Torture, in what would be a game-changing move that finally triggered an investigation, Irish Department of Justice secretary general Séan Aylward tried to ward off an investigation with such downplaying. It was part of "a very distant, far-off time," he claimed about a series of institutions that only closed in the 1990s.

Yet many of the women confined in the last laundries to close were shifted to religious-run nursing homes. They are "still there," as Charlotte said in her testimony. Many still struggle with financial and health insecurity due to a stunted education and lack of a pension to draw upon, since they were never paid for their labor.

Justice for Magdalenes Research asks: Whose secrets are being kept? And has there been any response or reckoning by the congregations that ran the laundries?

The answer to "whose secrets" seems to be those of both church and state and their collusion. While the state falsely claims the laundries were privately run and essentially out of its jurisdiction (thus exonerating the state of its negligence to properly inspect the laundries and protect the women workers), the congregations have largely kept mum. 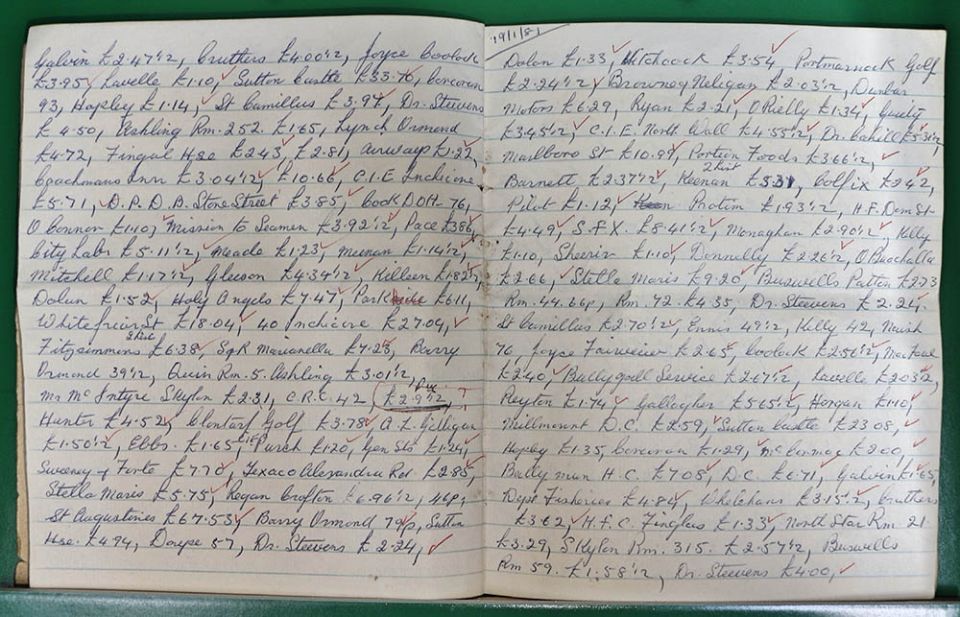 In 2013, after five years of campaigning by Justice for Magdalenes Research and the publication of the Magdalene laundries report, Irish Prime Minister Enda Kelly made an official apology to "these extraordinary women," the Magdalene survivors. The congregations issued statements of "regret."

Since then, the state's administration of redress has been mired in what reads like a "death by a thousand denials, delays, and technicalities" operation. Among the many issues, survivors were required to sign a waiver stating they would not take any legal action against the state.

The congregations, meanwhile, have refused to pay into the scheme. Their archives also remain closed, denying survivors and adoptees even the right to know their history and identity.

How can women devoted to serving a church that proclaims the dignity of the human person remain silent and ignore the pain of the other women they claimed to have tried to merely "rehabilitate" or shelter?

Justice for Magdalenes Research's book shows a history of classism embedded in modern Irish Catholicism. The women who entered congregations in Ireland in the 19th century, when the number of orders and religious surged dramatically, were largely middle class. Nuns required dowries before being accepted into a convent. They came from households in which they helped supervise servants and handle financial affairs. Working-class women were only accepted as "lay sisters" in convents, performing menial labor such as cooking and cleaning.

By the time of Ireland's independence, this religious classism was overlaid with a constitutional sexism. Many of the Irish members of the British Parliament who argued for Home Rule had female family members in the convents. This connection led to their objection to state oversight of convent-run laundries.

The men who formed the new Irish republic also wrote an article into the country's constitution essentially placing women's rightful place as in the home and marking womanhood as indistinguishable from motherhood.

Nuns lived outside this definition of "woman as wife and mother," but they did so in service to Christ and the Catholic faith, which was deemed commendable and a credit to a nation seeking to identify itself as "triumphantly Catholic" and occupying a higher moral ground than their British, non-Catholic colonizers.

But women who became pregnant out of wedlock, who had been raped or abused, who had been deemed "promiscuous" or who were unwanted by their families were another story. They were considered a shame to the nation. They were to be contained, controlled, kept out of sight. 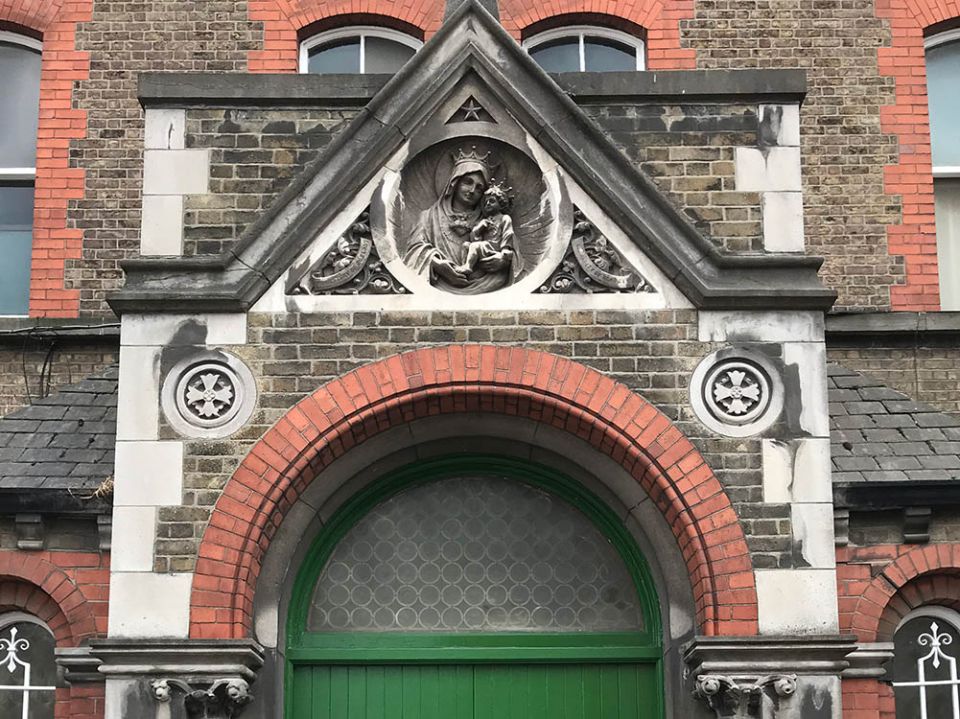 The archway above the entrance to Our Lady of Charity, the now-derelict Magdalene laundry on Sean McDermott Street in Dublin (Sarah Mac Donald)

Perhaps more tellingly, as Justice for Magdalenes Research's book notes, there were never any Magdalene laundries for men. There were no corresponding church-run rehabs for the men who abandoned their families, nor for those who put girls and women in those situations that landed them in institutions.

Even today, as Catholic observance in Ireland has dramatically declined in recent years, with laws now allowing for divorce, same-sex marriage and abortion, the constitutional article equating women with domesticity remains.

The Second Vatican Council, however, overhauled the lives of nuns. Long gone are the dowries, the rule of enclosure and the disciplinary procedures that marked their religious formation. Justice for Magdalenes Research's book quotes a nun in the state's report on the laundries: "There were a lot of things you would do differently if you had it again. But sure, we were institutionalized, too."

She isn't wrong. Ireland's hand-in-glove church-and-state system of institutionalism, classism and sexism put two populations of women together and yet against each other. But the point of Justice for Magdalenes Research's tireless advocacy, and of the courageous testimony of Magdalene survivors, has been deinstitutionalization through transformative justice and human dignity through truth-telling. The code of institutions, by contrast, is silence. As long as the congregations responsible for the Magdalene laundries keep silent and refuse to apologize, open up their records and contribute to redress, they will remain both victims and abettors of institutionalization.

A version of this story appeared in the May 27-June 9, 2022 print issue under the headline: Book details long battle to get justice for Ireland's Magdalene survivors . 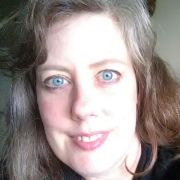 René Ostberg lives in Illinois and is currently working toward a master's degree in library and information science at Dominican University. She has written for U.S. Catholic, America and many other publications.

Enter your email address to receive free newsletters from NCR.

Send your thoughts and reactions to Letters to the Editor. Learn more here

How Christian nationalism paved the way for Jan. 6

EWTN failed its viewers by not airing testimony about Jan. 6 attack

Darkness may endure but grace gets us through

The designs of God

Support our journalism: Become a member.

A celebration of the Voices of Young Catholic Women project

Magdala celebrations heal long-buried misogyny -- but will our daughters care?