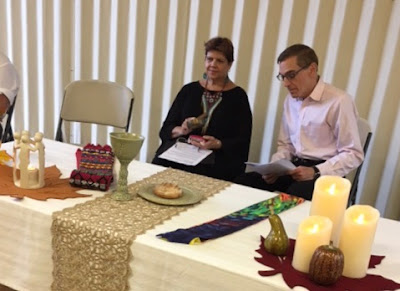 Kim Panaro, ARCWP, and Dave DeBonis led the Upper Room Liturgy with the theme of Interdependence.  Dave DeBonis' homily starter is printed below along with the first reading from "Looking at Columbus Day through the Lens of our Baptismal Vows" and the Gospel from Matthew. 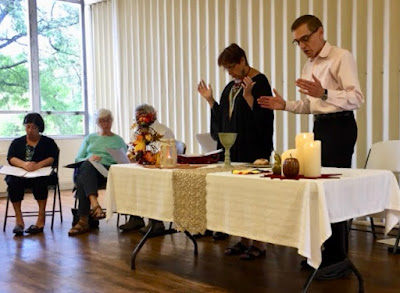 Dave's homily starter:When Kim and I were planning todays liturgy, Kim mentioned that it was Columbus Day weekend and suggested that we consider including something about Native Americans in our theme. In doing some research, we were very happy to find the courageous statement from the Episcopal Church calling us to reflect on the role of the Church in the immoral treatment of Native Americans and the ongoing lack of justice experienced by our NA brothers and sisters. The way the first reading directly critiques the actions of the institutionalized Church-- by comparing these actions with the message of the Gospels and the life of Jesus-- challenges us to do the same in our daily lives—in the choices we make and the courage we are willing to demonstrate.

Beyond our NA brothers and sisters, the readings of this liturgy also call us to reflect on all peoples who are viewed by some as “less than.” This could include African Americans, immigrants, GLT individuals, women, the poor, and people with disabilities. Let us not only reflect on their lives and their worth but also on actions we can take to remind the broader society that through Jesus’ ministry we have learned that God’s has a special kind of care for the marginalized. Let us remind them that the stone rejected by the builders will become the cornerstone. In the word of Elizabeth Johnson, let us destabilize prevailing norms regarding who is first and who is last in God’s eyes.


First Reading: Excerpted from Looking at Columbus Day through the Lens of our Baptismal Vows
https://www.episcopalchurch.org/files/Leader_Guide_Oct_13_edited.pdf

In 2009, the Bishops of the Episcopal Church made an unprecedented decision to repudiate the Doctrine of Discovery. This document refers to a set of legal and ecclesiastical documents and policies giving full blessing and sanction of the Church to the colonizing of the indigenous peoples and lands of the Americas. The Doctrine of Discovery refers to documents, and practices of Church and state that legally justified the theft of Native lands, denial of basic human rights and self-determination, and the attempted extermination of Native identity.

These policies, which included actions taken in the 15th C. by Henry VII, (1496) and other
Christian leaders, continue to be invoked in contemporary practice and are used to justify ongoing
oppression of Indigenous Peoples throughout the Americas and serve as a painful example of where the church has been in error and how these errors contribute to contemporary social and economic issues. The on-going impact of the Doctrine of Discovery can be seen in and attributed to the failure of state and federal governments to fulfill the promises made in legally binding treaties. Past destruction of Native economic, social and spiritual systems can be seen today in disproportionally high rates of suicide, violence, and abuse among Native Americans, as well as the lack of education among its youth.

The legal and religious reasoning and language used to explain and
justify the Document of Discovery stands in glaring contrast to the vows of
the Baptismal Covenant “to persevere in resisting evil, to seek and serve Christ in all persons,
loving your neighbor as yourself, to strive for justice and peace among all people, and
respect the dignity of every human being.”

In denouncing this doctrine, the church made a public commitment to all Indigenous Peoples to seek a greater understanding of and support for them. The church, therefore, is seeking reform in response to colonialism and its aftermath; actions which fundamentally oppose the Gospel of Jesus. Especially at this season of Columbus Day, we are summoned, as people of faith, to learn about and reflect on the painful disparity between God’s call for justice and compassion, and the history of our nation and church.

New information alone does not bring about healing and hope. Rather, these may come from shared responses to a painful past that are formed in and by Christian faith. New information is spiritually formative when it changes the way we think, feel, pray, and behave. God summons all of us to ponder the injustices that have been done on our behalf, and continue to harm the lives of many, so that we might work together for healing and hope for all.

Gospel - Inclusive Bible--Matthew 21: 33-43
"Listen to another parable.
There was a property owner who planted a vineyard,
put a hedge around it, installed a wine press in it, and erected a tower.
Then he leased it to tenant farmers and went on a journey.
When vintage time arrived,
the owner set aides to the tenants to divide the share of the grapes.
The tenants responded by seizing the aides They beat one stoned,
another, and killed a third.
A second time the owner sent even more aides than before,
but they treated them in the same way.
Finally, the owner sent the family heir to them thinking:
'They will respect my heir.'
When the vine growers saw the heir, they said to one another,
‘Here’s the one who stands in the way of our having everything.
With a single act of murder we could inherit everything.’
With that, they grabbed and killed the heir outside the vineyard.
What do you suppose the owner of the vineyard will do to those tenants.?"
They replied,
"The owner will bring that wicked crowd to a horrible death
and lease his vineyard out to others who will see to it that
there are grapes for the proprietor at vintage time.”


Jesus said to them, "Did you ever read in the Scriptures:
The stone that the builders rejected
has become the cornerstone;
it was our God’s doing and it was marvelous to behold?
That’s why I tell you that the Kingdom of God will be taken from you