"How Far Will Vatican Go to Combat Priest Shortage in the Amazon?" by Nicole Winfield AP

My response: Is the Vatican considering women deacons in South America since women are already functioning for all practical purposes as deacons there? Roman Catholic Women Priests are are ministering in South America. See story by Bishop Olga Lucia Alvarez Benjumea and photos of our recent ARCWP ordination on June 2, 2018 in Colombia. http://bridgetmarys.blogspot.com/2018/06/photos-and-story-of-historical.html 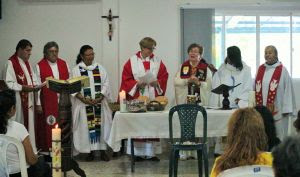 In the article below, Cardinal Lorenzo said: “We don’t want to preclude anything,” he said. Similarly, he didn’t identify which “official ministries” women could undertake." Bridget Mary Meehan ARCWP, #womenpriestsnow, https://arcwp.org

Nicole Winfield | AP
VATICAN CITY — The Vatican called Friday for courageous proposals to cope with a shortage of priests in the Amazon, and said it wouldn’t rule out debate on whether married men could step in to fill the “precariously thin presence” of the Catholic Church in the vast region.
In a preparatory document seeking input from South American bishops for the Vatican’s 2019 meeting on the Amazon, organizers also said the church must identify new “official ministries” for women to play in the region.

The call for “courageous, daring and fearless” proposals suggests that the Vatican wants the region’s bishops to put forward concrete proposals on whether married men of proven virtue — so-called “viri probati” — could celebrate Mass in places where priests are in short supply.
The “viri probati” proposal has been around for decades, but has drawn fresh attention under history’s first Latin American pope thanks to his familiarity with the challenges facing the Amazon church.
At a press conference Friday, organizers of the Amazon synod said the document and the attached questionnaire will solicit suggestions from regional bishops that will then be incorporated into the document that will guide the October 2019 debate.
Cardinal Lorenzo Baldisseri said he didn’t use the term “viri probati” in the document because he wanted to let church leaders in the field make their proposals.
“We don’t want to preclude anything,” he said.
Similarly, he didn’t identify which “official ministries” women could undertake.
Women currently do much of the heavy lifting in the Catholic Church in the Amazon region. Francis has appointed a commission of experts to study the role of women deacons in the early church, presumably with an eye to seeing if an ordained female diaconate could be permissible today.
Deacons, an ordained ministry currently reserved to men, can preach and preside at weddings, baptisms and funerals. But only priests can celebrate Mass.
Unlike women’s ordination, which is forbidden as a matter of church doctrine, the practice of a celibate priesthood in the Latin rite Catholic Church is a discipline that could be changed. Many eastern rite Catholic Churches allow married men to become priests.
Posted by Bridget Mary Meehan at 2:08 PM