https://www.youtube.com/watch?v=G00LMtBVlwU
This was the first liturgy we celebrated at St. Andrew UCC in March 2009.


https://www.youtube.com/watch?v=O3gZRAUuUjI
Easter Vigil at St. Andrew UCC, April 2010 Michael and Imogene Rigdon on the right, Lee and Carol Ann Breyer on the left


https://www.youtube.com/watch?v=nBVqy37hc-s
Photos and a glimpse of some highlights of our MMOJ Story 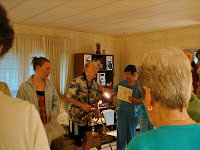 These photos provide a glimpse of the joyful celebration of our Easter Vigil on March 22, 2008. 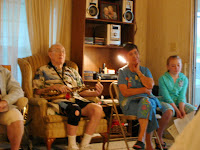 Over 30 people gathered in our House Church including members of Duffy and Gumbleton family.  My Dad,  Jack Meehan led the music with his saxophone with a lively version of Jesus Christ is risen today.
Our homily was a dialogue with many of the community offering insights. I I asked the community to share what they wanted to "go and tell "this Easter. 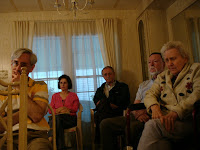 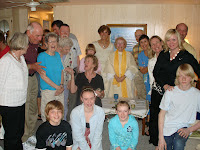 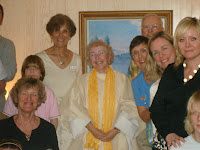 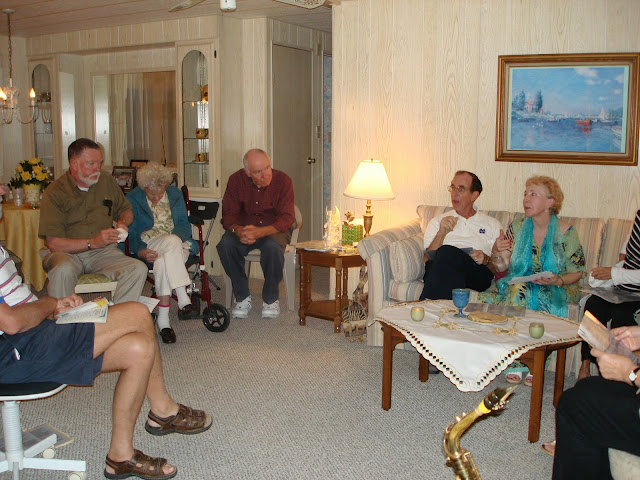 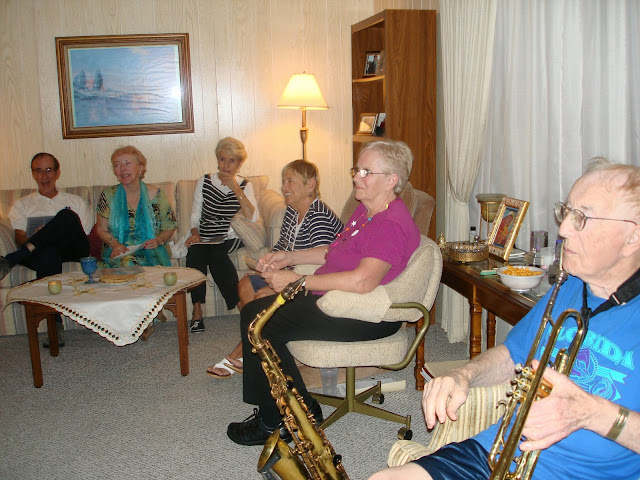 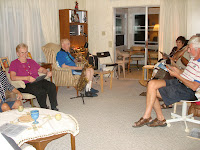 On Sat. Dec. 6th, 2008, members of Mary, Mother of Jesus community,(some of our snowbirds are not in Fl. yet) met for prayer, reflection and discernment. Our prayer and sharing led us to conclude that our ministry in the local church in Sarasota/Venice is to reflect God's love embracing all by living this vision of inclusivity and compassionate care and outreach to our sisters and brothers. We are called to "shepherd"-- to give comfort to God's people now.

We consecrated ourselves to be the hands and feet of Christ in our local communities. One of our prayers is that our brothers, priests, religious and bishops, will embrace Jesus vision of justice for women in the church and work for a renewed priestly ministry in the Roman Catholic Church as an inclusive, renewed discipleship of equals.

Tomorrow, Dec. 8th is the feast of the Immaculate Conception. Mary, Mother of Jesus is the role model of our local Sarasota House Church Catholic Community. Our work for justice, equality and a renewed priestly ministry in the Roman Catholic Church is rooted in the prophetic vision of Jesus which is echoed in Mary's prayer for justice, equality and empowerment. Mary’s prayer, the Magnificat, reflects the prophetic vision of Jesus who rejects domination and injustice and calls us to mutual service and empowerment. Mary prays to the Holy One who has done great things for her and portrays God as the liberator of the marginalized and oppressed. “God raises up the lowly and puts down the mighty from their thrones.” As we know, women continue to be the oppressed of the oppressed in our world to this day.

In praying the Magnificat, we stand with Mary, the simple teenaged, pregnant, but unmarried woman of faith, in her clairvoynat perception of God's relationship with us, through the strong language of her prayer. In this prayer, Mary is a symbol of strength, comfort, and power for the disinherited and powerless of the world. She is companion, champion, and change-agent for the righteous poor, who will triumph over oppression and experience the justice promised to them by God. (Praying with Women of the Bible, p.105)
Jesus, Mary's child, called women and men to be disciples. "With Jesus went the Twelve, as well as some women he had healed of evil spirits and sicknesses; Mary of Magdala, from whom he had cast out seven demons; Joanna, the wife of Herod's steward Chuza, Suzanna; and many others who were contributing to the support of Jesus and the Twelve with their own funds. " (Luke 8:2-3)

It is obvious from the archaelogical evidence that the early Christian community upheld Mary, Mother of Jesus, as mentor of women leaders and office holders in the early church. In St. Priscilla’s catacomb, there is a beautiful frescoe of Mary, dressed in bishops’ robes and seated on a bishop’s chair, present at the ordination of a woman priest. Mary is also depicted in a group portrait with Episcopa Theodora in a mural in St. Praxedis Church in Rome.

Mary, Mother of Jesus, may we live your prophetic call as witnesses to justice, equality, mutual service and empowerment. 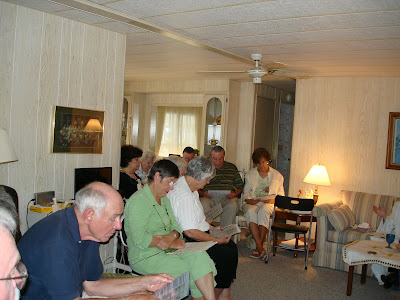 
Feb 26, 2008 - The pastor is listed as "Bridget Mary Meehan, ... And, she insists, she really is a properly ordained Roman Catholic priest, and not the only woman who ... Tom Lyons can be contacted at tom.lyons@heraldtribune.com or (941) ...

The Roman Catholic Diocese of Venice has asked the Herald-Tribune to stop running a certain religious service announcement, or at least remove some words.
Sorry, but editors have decided not to comply.
The listing is for Mass at the “Mary Mother of Jesus Catholic Community House Church.” It includes the Fruitville Road address in Sarasota, and phone numbers, and has appeared under the heading “Inclusive Catholic Mass” more or less weekly.
The problem? The pastor is listed as “Bridget Mary Meehan, ordained R.C. female priest.”
A diocese spokeswoman, Adela Gonzales White, says there are no female Roman Catholic priests, period. It is against church law for Meehan to claim to be one and to celebrate Mass.
The diocese has placed an ad in the Herald-Tribune saying that “no such worship site exists within the Diocese, nor is it recognized by the Diocese of Venice.”
Is it a religious fraud, then, with someone posing as something she’s not?
Meehan has certainly heard that opinion. But while she’s the first to admit she’s breaking church law, she says it’s the right thing to do, and that she is part of a movement to change the church.
And, she insists, she really is a properly ordained Roman Catholic priest, and not the only woman who can say so.
“I was ordained on July 31, 2006, in Pittsburgh, Pa., by women bishops who were ordained by Roman Catholic male bishops,” she says. “Roman Catholic Womenpriests” -- it’s an international organization, spelled as one word -- “are breaking an unjust law that keeps women subordinate in the Roman Catholic Church.”
She sounds a bit like “The DaVinci Code” author Dan Brown when she refers to Mary of Magdala as “the apostle of the apostles” and proof that Jesus never intended to limit the roles of women in his church.
Meehan also invokes Rosa Parks, the black civil rights icon who refused to sit in the back of a bus and so helped ignite a movement. The Catholic Church needs a similar movement, Meehan says.
“St. Augustine taught us that an unjust law is no law at all and does not bind us,” she wrote in a letter to the editor in response to the Diocese’s ad.
But she’s no brash outsider trying to break into a career in the Catholic Church. Meehan went to Catholic school as a child, became a nun at 18, and has served with two Vatican-approved orders. She wrote books published by Catholic publishers, with sales above 100,000, she says.
She joined a not-Vatican-approved order of nuns in the later 1990s, and since the 1996 ceremony where she and 11 other women were ordained, she has been a non-recognized priest. She is one of dozens in several nations aiming to help convince the Vatican to accept women as priests.
There’s no sign of any such inclination with the current pope. But at least the Vatican has stopped excommunicating the women, as was done with the first group of seven ordained in Germany in 2002.
So how’s it going in Sarasota, where Meehan lives part of the year in a manufactured home that is also the site of the services?
The worshippers are enthusiastic, Meehan says. Some have recently been regular attendees at mainstream Catholic churches, others had long felt alienated from the church, she says. But even though a feature story in the Herald-Tribune 10 months ago helped double the attendance, 20 people is still a good turnout.
So I think the Diocese will survive the challenge.
And really, everyone should be glad that newspaper employees will not be deciding who is right or wrong theologically.
The only definitive source a journalist could use to confirm or deny the validity of Meehan’s standing is really hard to reach by phone, fax or e-mail, and has not announced a press conference.
Tom Lyons can be contacted at tom.lyons@heraldtribune.com or (941) 361-4964.


This could be the last Easter season that former nun Bridget Mary Meehan will be called a priest in the church service announcements that so bother the Roman Catholic Diocese of Venice.
But the religious scholar’s small congregation of reformist Catholics shouldn’t worry. Bishop Frank Dewane, who supports the pope’s decision that women remain barred from Roman Catholic priesthood, won’t like the reason Meehan will drop the title.
Meehan isn’t throwing in the vestments or giving up her quest to get the church to accept women as priests. Heck no, not when the Women Priests organization she is part of is growing and adding more female priests.
Her own small Sarasota congregation just became big enough to outgrow Meehan’s mobile home, and her Saturday Night Mass has lately been held at space rented at the St. Andrew United Church of Christ.
The reason for her title change: Meehan is to be promoted to bishop.
Or, anyway, she is to be proclaimed one along with three other women in a ceremony sanctioned by Women Priests, but not sanctioned by the Vatican. The date and location of the ceremony is under wraps, in case of church efforts to head off an as-yet-unnamed male priest or other male church official planning to participate.
The Diocese of Venice has complained to the Herald-Tribune about running Meehan’s announcements of her “inclusive Catholic Mass.” That’s fraud, a diocese spokeswoman said, because by calling herself a priest, Meehan broke church law and “excommunicated herself.”
But Meehan, author of several books published by Catholic organizations before she crossed that line in 2006, says she has always been Catholic -- always will be -- and no human can change that.
“We are as Catholic as the pope is,” she said.
Still, is the bishop thing a publicity gimmick?
No, it is sincere and practical, Meehan said. One woman was serving as Women Priests bishop for the entire United States. With new congregations forming, they need more.
I like Meehan and her stand. But, I asked, shouldn’t people who reject the pope’s authority on this just join another church, or start one?
She reminded me that Joan of Arc, burned as a heretic, was later named a saint, and Jesus, the best role model, wasn’t big on following rules.
“It would be so easy to join another church or a new religion” and escape the heat, Meehan said. But Women Priests love the church and deeply want to correct erroneous interpretations of Jesus’s view of women.
Though called theology, what they are battling is the usual “boys club” sexism and turf guarding that women battled in so many other institutions.
“We are faithful Catholics, and passionate reformers.”
Tom Lyons can be contacted at tom.lyons@heraldtribune.com or (941) 361-4964.

Missing: article ‎| ‎Must include: ‎article
More with Jack Duffy:
Jack Duffy, one of our leaders from Mary, Mother of Jesus House Church Catholic Community wrote this letter to the editor which was published in the paper. It is important that we speak truth to power. Thank you Jack for your prophetic words to our institutional church calling for accountability, transparency and a return of focus to the healing and compassionate love of Christ for all.
http://www.heraldtribune.com/article/20090103/LETTERS/901030316/2163/OPINION?Title=Church_fails_to_create_transparency
Jack responded to this article in Herald Tribune
http://www.heraldtribune.com/article/20081230/ARTICLE/812300346