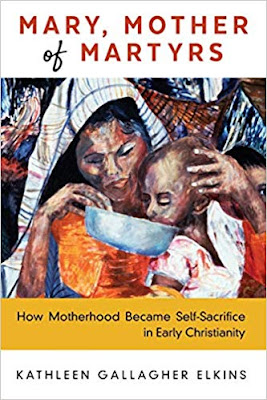 
Kathleen Gallagher Elkins makes a strong case for the usefulness of feminist biblical scholarship to examine and transform patriarchal thinking about women. Her book is a welcome crash course in the latest research and writing in a field that I bet most preachers do not even know exists. She demonstrates how the tired tropes of women's self-sacrifice that reinforce oppression and expectations of martyrdom can be expanded and refreshed realistically in light of contemporary women's lives. On balance, every woman's self-sacrifice is not oppressive and every form of oppression is not caused by women's self-sacrifice.


Scholars are in Elkins' debt for a dense, complicated and multilayered critical analysis, while more casual readers will be amply rewarded, too. She offers a helpful review of the literature that grounds her creative, insightful and imaginative proposals. The introduction stands alone as a clear and compelling overview of her argument, making it easily accessible.
Elkins relies on two signal approaches to feminist biblical studies. The first is Elisabeth Schüssler Fiorenza's insistence on "the politics of interpretation," attention to how texts are interpreted both in terms of the text itself and how such an interpretation affects those who read it in their everyday life. The other is "critical reflexivity," both the what and the how of reading such texts in their contexts. To make her case, Elkins pairs four familiar scriptural texts with four renowned women's groups.
Her first focus is Mary as known all-too-well through the Lukan account (Luke 1-2) and endless preaching about her life of suffering and sacrifice. Mary is linked with the Mothers of the Plaza de Mayo (mothers of the disappeared in Argentina). Through the lens of their common maternal loss, readers are directed to a much larger context. The women's efforts to find and protect their children (and grandchildren) are heroic and healing for the polis, not just for the family. This points to a far more nuanced and complex understanding of the Jesus narrative: Mary can be seen as a composite figure for a community in struggle rather than a female fulfilling her destiny as a woman.
The next example is the Woman Clothed in the Sun in the Book of Revelation (12:1-17) as well as other female icons — Jezebel, Babylon and Jerusalem — mentioned there. Elkins refuses to reinforce the "good mother" vs. "bad mother" images that have grown around these names. Rather, she suggests that "these multiple images of motherhood that involve loss, threat, protection and reproduction also allow us to see the ways these figures are being used in larger discourses about community identity formation, continuity, and suffering."
The analysis makes sense especially when the four females of Revelation are juxtaposed with women of the Frente Farabundo Martí para la Liberacíon National (FMLN) in El Salvador who fought as guerrillas in the late 20th century. Their pain at the threatened and real loss of their children is also contextualized in light of larger struggles in their communities.
Her third example is the Maccabean mother with her seven sons (2 Maccabees 7:8-18) who die one after the other as they comply, with her encouragement, with their community's customs. These are hard cases to rationalize, indeed to understand at all. What stands out is the deep complexity of evil in which generations, including mothers, have had to make impossible choices.
Elkins looks at this text in light of Israeli and Palestinian suicide bombers who live in equally complex times. They all cite their traditions as reasons for their actions, traditions that defy compatibility or even peaceful co-existence. In doing so, Elkins invites deep reflection, not on the historicity or morality of any of these actions, but rather on evil itself. Cheap, easy interpretations of these texts, and the preaching that results, ignore at their peril the often-intractable nature of evil.
Finally, this capable scholar looks at the mothers Perpetua and Felicitas who leave their children behind in their own martyrdom. They are hardly models of responsible women in patriarchy, even in the second century of the Common Era when the texts appeared. Elkins admits that their stories have not had the impact of Mary's and that Perpetua's gender fluidity (sometimes she is described in masculine terms thus queering the text) adds an inexplicable layer. They persist as female-gendered outliers whose reasons for radical actions, such as leaving children or being martyred, invite critical examination.

Elkins reads them in light of the Russian group Pussy Riot, whose members have suffered a similar fate at the hands of the Putin government. Their arrests and imprisonments have been critiqued in terms of abdicating their responsibilities as mothers, an apt and chilling comparison. Far more than gendered caretakers, women are fully human agents of social and political change sometimes using their own lives as collateral.
In all cases, what shines through is the complexity unto impossibility of being a woman as defined by patriarchy. Whether a virgin and mother, a mother whose children are seized from her, a woman who watches and even encourages her children to suffer and die, a woman who suffers and dies herself, all women labor under and are understood through patriarchal expectations and interpretations of ancient texts.
The bottom line is that women can't win for losing in patriarchy. Its texts, and especially the reading and reinscribing of them in such a context, are very dangerous and damaging. This book is welcome proof that other outcomes are possible.
[Mary E. Hunt is a feminist theologian who is co-founder and co-director of WATER, the Women's Alliance for Theology, Ethics and Ritual, in Silver Spring, Maryland.]


This story appeared in the April 5-18, 2019 print issue under the headline: Women: fully human agents of social, political change .