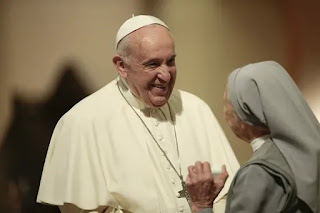 Pope Francis talks with a nun during a meeting with Catholic priests and other Christian representatives in the cathedral of Rabat, Morocco on March 31, 2019. He said in a document released on April 2, 2019 that women have "legitimate claims" to seek more equality in the Catholic Church.

My response to Pope Francis is we need an action plan to make justice a reality for women in the Church? He could invite women to lead the way in putting together an action plan that would expand women's leadership in every area now.  He could dialogue with our women priests and inclusive  communities about what a renewed priestly ministry looks like. The list goes on and on. Words need to be followed by action to achieve justice and equality. Pope Francis needs to act now!
I cringed when I read the suggestion that youth should help troubled priests because that advise exposes them to potential sexual abuse.  While we are called to forgive and be compassionate on the journey to healing and empowerment, we are not called to expose youth to possible future sexual abuse or danger of any sort.
Bridget Mary Meehan ARCWP, https://arcwp.org, sofiabmm@aol.com


(VATICAN CITY) — Pope Francis said in a document released Tuesday that women have “legitimate claims” to seek more equality in the Catholic Church, but he stopped short of endorsing recent calls from his own bishops to give women leadership roles.
In the text, Francis also told young adults they should try to help priests at risk for sexually abusing minors in what a Vatican official said was a great act of trust the pope has for today’s youth to help “priests in difficulty.”
Francis issued the document, known as an apostolic exhortation, in response to an October 2018 meeting of the world’s bishops on better ministering to today’s young Catholics...