32nd Annual Stations of Cross for Justice, March 30, 2018 A Good Friday for a World Sorely in Need of Peace by Janice Sevre-Duszynska ARCWP 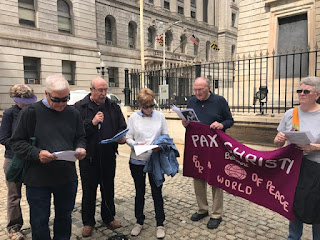 Today, 13 of us took part in the 32nd Annual Good Friday Justice Stations of the Cross in downtown Baltimore. We were activists, including nuns, a brother, couples and singles, led by Chuck Michaels of Pax Christi Baltimore-Metro D.C. who has organized the service these many years. This was my fifth time participating and again under stormy skies. What follows is taken from the program written by Chuck Michaels:

“The Stations are an important time to recall Jesus’ life while realizing that his death was the result of his bold confrontation of political power, spiritual authority, social convention, and narrow thinking of the day. The Stations continue to help us recognize that the price, the “cross” Jesus spoke of, for those who follow Him, meant the consequences of speaking and acting against oppression and violence in ALL its forms.

“Seen in this way, the Passion and Death of Jesus not only are an occasion for the private renunciation of sin, including ‘social sin,” but also present a moment for making those connections between the suffering of that Time and the suffering of humanity now. So we are called to stand, on this Good Friday 2018, before our City, to speak out against today’s injustices and to note the issues and conflicts we face here and abroad: death penalty, the CONTINUING WAR in Afghanistan, conflicts in Syria, and elsewhere, a spiraling arms race, and a dearth of leadership especially at the State and national level.

“Lives are torn. Children are lost. Wars are waged. Let us in this Procession realize that humanity is not ultimately in charge, and violence cannot continue forever, and wars do end—if we all take up the ‘cross’ of prayer and the unending tasks of peace.”

I addressed the Third Station outside Wells Fargo Bank:

When I was eight years old, I opened a bank account at Lincoln State Bank on Milwaukee’s southside and deposited dollars that had been given as gifts for my First Holy Communion. I did not see the bank then as a decadent system that represents a form of living that focuses on competition and greed.
But our Brother Jesus knew that the Roman Empire was based on just such a system where the 2 or 3 per cent lived ostentatious lives – while the rest of the people of God struggled to stay alive – from the connected oppressive social controls of colonialism, nationalism, sexism, militarism, and racism.

Against conscience and Gospel Nonviolence, this bank along with Wall Street controls how we live. We are at the mercy of an unjust system where all are not treated as children of Holy Mystery.  Let us be rooted in Holy Mother Earth, restore our souls in her beauty and find liberation in lives based on cooperation.

By the time we got to the fourth station, it began to pour. We agreed to meet at St. Vincent de Paul’s, a church with a social conscience, where the poor are fed and the homeless are given assistance. We were all wringing wet when we arrived.

Max addressed the Ninth Station that was to have been read in front of Baltimore’s War Memorial Building.  He talked about how depressing it is under the Trump administration but also mentioned signs of hope: The July 2017 United Nations vote to ban nuclear weapons and that ICAN won the Nobel Peace Prize. Physicians for Social Responsibility (with whom we work) has started a campaign called Back from the Brink to rid the world of nuclear weapons.  He brought up the 50th Commemoration of the Catonsville Nine that takes place in May and described “The Shape of Water” as the best movie of 2017, with the theme of community coming together to right a wrong.
Posted by Bridget Mary Meehan at 1:23 PM