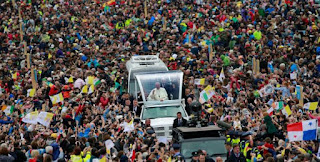 Pope Francis in the popemobile moving through the crowds in the Phoenix Park. Photograph: Nick Bradshaw/The Irish Times
Some 86 per cent said women should be allowed to become priests – something that successive popes have ruled out.


Pilgrims attending the papal Mass at the Phoenix Park in Dublin talk about Pope Francis, child abuse, women priests, and why they made the journey.Some 86 per cent said women should be allowed to become priests – something that successive popes have ruled out.

Speaking to Pope Francis in a widely lauded address in Dublin Castle on Saturday, Taoiseach Leo Varadkar stressed that the Ireland of 2018 was a different place to the country visited by Francis’s predecessor John Paul II in 1979.
The same theme flowed through virtually all the reports and reflections on the pope’s visit. And the results of Tuesday’s opinion poll offer sharp details of just how much Irish people have changed in their attitude to some of the church’s teachings, in particular to its rules on high-profile social and sexual issues. John Paul, unyielding on such matters, would have been horrified.
Yesterday, the day after Pope Francis departed the country following his two-day visit, Ipsos MRBI contacted people around the country and asked a series of questions about their attitudes to the visit, to the pope himself, and about their views on aspects of Catholic teaching.

In contrast to regular Irish Times political polls, which employ a face-to-face methodology where respondents are questioned by interviewers on their doorsteps, this poll was conducted by telephone among a sample of 750 adults – large enough to produce a snapshot of national opinion with a margin of error of plus or minus 3.8 per cent.


Fifty years after Pope Paul reasserted the church’s ban on contraception, 92 per cent of those who responded said contraception “should be allowed in all circumstances”. More than three-quarters (77 per cent) said the church should recognise gay and lesbian marriages.
Remarkably, the numbers are very similar for most questions among the population as a whole, and both practising and lapsed Catholics.
The numbers on abortion are noticeably tighter – just over half (53 per cent) say abortion should be permitted in a wide range of circumstances, with 41 per cent disagreeing, and 8 per cent expressing no opinion.

The poll also tends to show that a desire for inclusivity and openness to diversity in the church extends across the population at large. Asked if the church should embrace those who do not agree with all church teachings “including those who voted in favour of abortion in the recent referendum”, the results show a large majority in favour of such openness.
More than three-quarters of people (77 per cent) say the church should be open to those who do not follow all its teachings.
The poll also shows the extent of the decline in religious practice among Catholics. Two-thirds (67 per cent) of adults say they “describe themselves as Catholics”, noticeably lower than the 2016 census which simply asked people’s religion, when 78 per cent of all people said they were Catholic.
Of those who identified as Catholics, 36 per cent said they attended Mass weekly or more often, with 29 per cent saying “less often” and 35 per cent saying they only attended for weddings and funerals.
Irish Catholics remain attached to their church – but on their own terms.