As I celebrate my birthday today, I give thanks for my parents, Bridie and Jack Meehan, my family, friends, communities, the Roman Catholic Women Priests Movement and Peoples Catholic Seminary whose mission is to foster transformation, empowerment and equality.

I rejoice in God's loving presence within me and within people of good will everywhere in our country and world.

I rejoice that infinite love embraces me and all of us in our giftedness,  wounds, hopes and dreams.

I rejoice that Jesus embodied the fullness of divinity and showed us how to live life fully and love tenderly in the midst of suffering, tragedy, and chaos.

I  rejoice that I am called to lovingly serve my sisters and brothers and to work for justice, equality and inclusivity in my Church and world as a Roman Catholic Woman Priest.

Here is the story of my calling below:

One night as St. Teresa of Avila prayed, she heard laughter everywhere and God said to her, " enjoy me." Perhaps, this is the divine message to the hierarchy about women priests!

Like bright rays of sunlight streaming through fluffy white clouds, God's loving presence has illuminated my path from childhood days. When I reflect on my memories of an Irish childhood I realize that the Catholic Church is in my DNA.

There are approximately 264 members in our international women priest communities in 33 states and in Germany, Austria, France, Scotland, Canada, and South America. From our birth on the Danube River, the Roman Catholic Women Priest has evolved into two streams in Europe (West and East), two in Canada (West and East), and two in the United States (RCWP USA and ARCWP).
The specific charism of ARCWP within the broader global Roman Catholic Women Priests initiative is to live Gospel equality and justice now for all including women in the church and in society. We work in solidarity with the poor, exploited, and marginalized for structural and transformative justice in partnership with all believers, embracing both  contemporary theology and egalitarian structures. Our ARCWP vision is to act as a community of equals in decision-making both as an organization and within our faith communities. We advocate a renewal of Jesus’ vision in the Gospel, and celebrate our oneness with the community of the baptized, in a non-clerical model of church that promotes a peaceful and just world.

We offer a pathway to priesthood for women called who have had years of experience in ministry, but do not have a degree. Our ARCWP program begins by affirming the religious and life experiences of our candidates and proceeds to custom design a program of preparation that will develop the knowledge and skills our candidates need for a new model of ministry in the 21st century.
Mary Theresa Streck and I co-founded People's Catholic Seminary (PCS) a new interactive, holistic program of studies and spiritual programs that is online. In partnership with Global Ministries University, we offer an affordable Master’s degree of Pastoral Ministry. PCS utilizes resources like blogger and Zoom to communicate and build community across the United States, Canada, Europe and beyond.   https://pcseminary.org/

As Pope Francis considers the possibility of ordaining women deacons in the Roman Catholic Church, I believe that our focus needs to be on living the full equality of women in the priesthood and on opening all decision-making roles to women in the Church.

One night as St. Teresa of Avila prayed, she heard laughter everywhere and God said to her, " enjoy me." Perhaps, this is the divine message to the hierarchy about women priests!
Welcoming all to the table and affirming all ministries as equal in an inclusive Church is a powerful way to heal centuries of toxic patriarchy and clericalism. The international Roman Catholic Women Priests Movement is a prophetic, holy shakeup that is changing the Church, creating a more vibrant community of faith one joy-filled ordination, one inclusive community and ministry at a time! This vision and mission has become the passion of my life!
Click on link below to one minute movies from ARCWP deacons and priests: “What I want the world to know about my call to priesthood.”
https://bridgetmarys.blogspot.com/2018_07_08_archive.html 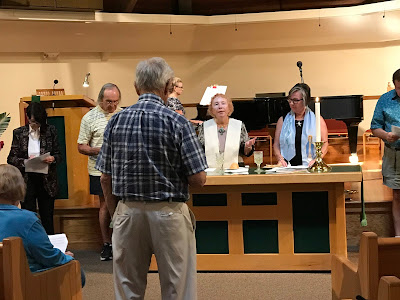 See 1 Minute Movies by ARCWP Members: "What I want the world to know about my call to priesthood" https://bridgetmarys.blogspot.com/search?q=%22What+I+want+the+world+to+know+about+my+call+to+priesthood%22

Vogue selected its story  about women priests in 2018 as one of its top stories
https://www.vogue.com/projects/13543313/roman-catholic-women-priest-movement-giulia-bianchi/

Posted by Bridget Mary Meehan at 8:21 AM