Letters to Editor in Sarasota Herald on March 8, 2008 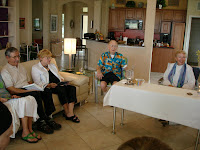 (http://www.romancatholicwomenpriests.org/RCWP_Resource.pdf). In our mission statement we clearly uphold the following: "The goal of the group ‘RC Womenpriests’ is to bring about the full equality of women in the Roman Catholic Church. At the same time we are striving for a new model of Priestly Ministry. The movement ‘RC Womenpriests’ does not perceive itself as a counter-current movement against the Roman Catholic Church. It wants neither a schism nor a break from the Roman Catholic Church, but rather wants to work positively within the Church.” We All are church, not just some. We reflect the people we serve: married, celibate, domestic partners, heterosexual, homosexual, bisexual, and transgendered. The Catholic Church teaches that a law must be received by the faithful. Seventy percent of Catholics in the U.S. support women’s ordination. Therefore canon 1024 which states that only a baptized male may receive Holy Orders does not have the force of law because it has not been accepted by the community or sensus fidelum. In fact, we have a moral obligation to disobey this unjust law. St. Augustinetaught that an unjust law is no law at all. As Cardinal Walter Kasper, the former bishop of Rottenberg-Stuttgar, Germany and current president of the Vatican 's Pontifical Council for Promoting Christian Unity wrote: "Some situations oblige one to obey God and one's own conscience, rather than the leaders of the church. Indeed, one may even be obliged to accept excommunication, rather than act against one's conscience." It is time for an inclusive church, in which all are welcome at the table.”
Posted by Bridget Mary Meehan at 7:23 PM No comments: 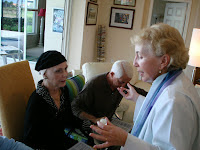 Response from Bridget Mary Meehan to Diocese of Venice OP ED in
Sarasota Herald Tribune
Thursday, March 6, 2008
Although Adela Gonzales White, spokesperson for the Diocese of Venice, states that the Diocese of Venice is interested in fair and balanced reporting, her commentary has several errors which I'd like to correct.
First, I did not receive any communication whatsoever from the bishop of the Diocese of Pittsburgh. I was ordained in Pittsburgh by Roman Catholic Womenbishops who were ordained by Roman Catholic male bishops in good standing with the pope. Therefore, these bishops have apostolic succession and my orders are valid. According to Roman Catholic teaching, any bishop in good standing with the pope has apostolic succession and has the authority to ordain. To be in “full apostolic succession” means that a bishop’s authority is passed down in a direct line from the first apostles of Jesus Christ.
Second, I agree that the public has a right to be informed and a right to all the facts, not just the institutional church’s view. The people of God are the church, not just the hierarchy. While Roman Catholic Womenpriests are breaking an unjust, man-made law that keep women subordinate in the RC church, our motivation is not to leave the church, but to lead the church into a new era of equality in which the identity of priests reflect the experiences of women. Ms. White leaves out the fact that decision-making in the church according to Canon Law is linked to Holy Orders. So no matter how many positions women may occupy in the Diocese of Venice or elsewhere, they are second class citizens excluded from official decision-making which is reserved for the clergy. Women will not be equals in the Roman Catholic church until they are ordained.
Third, Pope Benedict has not excommunicated any of the women who were ordained in Roman Catholic Womenpriests in North America. Roman Catholic Womenpriests are not placing themselves outside the church, as Ms. White states, but offering a renewed model of priestly ministry rooted in Jesus example of inclusivity in the Gospels.
Fourth This church teaching, prohibiting women's ordination is not based on Scripture, tradition or the teaching authority (magisterium) .
--Scripture: In 1976, the Pontifical Biblical Commission concluded that there is no biblical reason to prohibit women’s ordination.
--Tradition: According to tradition, women were ordained deacons, priests and bishops in the first twelve hundred years of the church's history.
--Teaching authority/ Magisterium: Roman Catholic church teaches primacy of conscience. The prohibition against women's ordination is not infallible. The doctrine of infallibility states that only those articles of faith which are embraced by the community of believers and have been a part of the tradition of the church since its earliest times can be declared infallible. According to recent surveys 70% of U.S. Catholics support women priests.
Fifth, Like Joan of Arc, and other courageous people who endured condemnation and excommunication during their lifetimes by the church for their holy disobedience, it is our hope that the Roman Catholic womenpriests community will one day be affirmed as faithful members of the church who offered the church the gift of a renewed priestly ministry in a community of equals modeled on Jesus in the Gospels.
Like the Diocese of Venice, I have received many emails and phone calls, but most people who called expressed their support for our house church and asked for directions. I am grateful that the Diocese of Venice has played a role in increasing our community at Mary, Mother of Jesus Catholic Community House Church.
Bridget Mary Meehan
Roman Catholic Womanpriest
sofiabmm@aol.com
http://www.romancatholicwomenpriests.org/
Posted by Bridget Mary Meehan at 7:43 PM No comments:

ABC news did a story on Mary, Mother of Jesus, House Church and interviewed Jack Duffy, a Venice Diocese official and Bridget Mary Meehan
http://www.kgc.cc/duffy.wmv
The written text of our ABCnews story of Mary, Mother of Jesus, House Church is up on this site. You can also click for video:
http://www.wwsb.tv/Global/story.asp?s=7971510
Posted by Bridget Mary Meehan at 7:39 PM No comments: 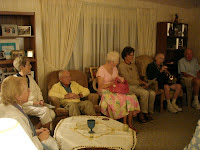 On Sat. evening, March 1st, 2008, our house church was full to capacity with many new faces.
I honestly think that the diocese of Venice's announcement has helped double the size of our community in a week. We are truly grateful to Bishop Frank Dewane for this gift.
Like the one born blind in the Gospel, we can move through the darkness to the light and experience the glory of God shining through our darkest hour. Sometimes it takes dark valleys to awaken us to new dreams and fresh perspectives. It will be a dream that draws us closer to one another in the heart of God.
Fr. Bryan Massengale, a contemporary theologian, observed in a recent article that the Roman Catholic church, as we have known it, is on life-support and our ministry to a dying institution is one of hospice care. The good news is a new creation is in now our midst.
Roman Catholic Womenpriests are forming a renewed model of priestly ministry in a community of equals modelled on the early Christians who gathered in their homes to celebrate the Eucharist. Now once again, in house churches, like Mary, Mother of Jesus, we are experiencing our spiritual kinship as God's family, supporting one another with our diverse gifts. Christ is reaching out through us to our sisters and brothers in our beloved church speaking to us in the depths of our hearts: "I love you, I love you, I love you. Come as you are into my healing embrace and experience deep peace and divine strength as the glory of God shines through you in the darkness.
Posted by Bridget Mary Meehan at 8:33 PM 3 comments:

Email ThisBlogThis!Share to TwitterShare to FacebookShare to Pinterest
Labels: The glory of God shines through us in the darkness
Newer Posts Older Posts Home
Subscribe to: Posts (Atom)