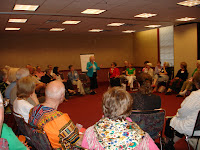 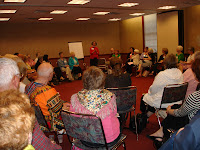 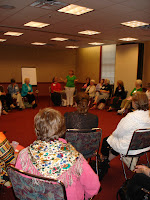 The first national gathering of Intentional Eucharistic Communities (IECs), small faith communities rooted in the Catholic Tradition that gather to celebrate Eucharist on a regular basis took place in 1991 with 155 participatnes from 15 communities. The second national gathering was held in May 2001, in the Washington, DC area. Over 240 members, representing 41 communities came together to celebrate and share. A gathering of Intentional Eucharistic Communities was held on May 15-17, 2009 in Chevy Chase MD. The keynote speaker was Robert Mc Clory, who shared his research on the early church, his experience with Dutch Dominican theologians and the transforming presence of IECs. Topics for others sessions were women in ministry, religion and spirituality, social justice and IECs and Young Catholics and the Future of IECs. Valerie Dixon, an Episcopalian woman priest, and Eileen DiFranco and I ( both RCWP) shared our journeys to priesthood and engaged in an open-ended dialogue with participants in the conference. For more information, visit
www.intentionaleucharisticcommunities.org
Posted by Bridget Mary Meehan at 10:17 PM No comments:

http://www.thesudburystar.com/ArticleDisplay.aspx?e=1571784
Posted by Bridget Mary Meehan at 9:14 PM No comments:

“Can you ordain a hermaphrodite?”
"Santa Clara University theology professor says Church had long history of ordaining women that ended because of 'virulent misogyny'
Gary Macy, a professor of theology at Jesuit-run Santa Clara University, told attendees at a Monday night lecture at the Vanderbilt University Divinity School in Nashville, Tennessee, there is little room for historical doubt that women were ordained in the Catholic Church until about the end of the 12th century.. historical evidence is overwhelming that for much of the church’s history, the ordination of women was a fact.”
Posted by Bridget Mary Meehan at 11:27 PM No comments:

Article by John Dilulio in America, the Catholic magazine: Catholic Leaders face challenges their predecessors could not fathom

John, J. Dilulio, in the May 11, 2009 issue of America presents a wake-up call to leaders in the Roman Catholic Church. According to the Pew Forum survey in 2008, "a third of Americans who were raised Catholic had left the church. One in 10 Americans are ex-Catholic. Ex-Catholics outnumbered converts to Catholicism four to one."
The article goes on to report a significant decline in church attendance according to another survey that between 1990 and 2008 the church’s flock fell from 26.2 percent to 25.1 percent of the total U.S. population, even though roughly half of all immigrants to the United States were Catholic. (National American Religious Identification Survey)
Read article in America/May edition or visit www.corpus.org and click on e-corpus to read article online.
I believe that many Catholics are alienated from the institutional church for a variety of reasons, but close to the top is its discrimination towards women. The full equality of women in the church is the call of Christ in our time. Roman Catholic Womenpriests are practicing prophetic obedience to the Gospel by offering the church the gift of a renewed priestly ministry in a renewed community of equals.
In order to change an unjust law, we must break the law, and out of the ashes the new will rise, like the phoenix. It has happened before and it is happening now.
Alleluia!
Posted by Bridget Mary Meehan at 10:35 PM No comments:

Why only Father titles?

Posted by Bridget Mary Meehan at 8:48 PM No comments:

The words, “This is my body; this is my blood” are holy words. We need these words in order to become the Body of Christ. The People of God are made holy by these words. They are fed and strengthened in order to do the hard work of building up the Body in the world.

Several years ago, I read about these holy words in the Jesuit magazine, “America.” A young mother wrote of trying unsuccessfully to calm her crying infant during mass. While carrying the baby out of the church, she heard the priest20say the words, “This is my body, given up for you.” She looked down at her child and understood that she had given up her body for her baby.

Like the Eucharist, life and death are intermingled in birth. Many of us who were born prior to 1960 recall stories about relatives and neighbors who died while giving birth. With our current low rates of maternal mortality in the western world, it is almost unimaginable to think that in some places at some times, more mothers died than lived while giving birth.

Before the advent of asepsis, becoming pregnant in some parts of the world was a death sentence. Doctors would go from doing autopsies to attending women in childbirth without washing their hands. The women these doctors touched died within days of overwhelming infection. Mary Wollstonecraft, author of “A Vindication of the Rights of Women, died of this infection which was euphemist ically but appropriately called “Childbed Fever.” This was her body, given up for her child.

Only in recent history could childbirth practitioners manage anything beyond he most minor deviations in labor and delivery without harming mother or child or both. Many other women died in childbirth because they had too many children in too short a time and had to work too hard to keep them all alive.

I never did learn why my great Aunt Helen died in September of 1924 while delivering twin girls who also died. My grandmother, also pregnant at the time, told me of how Helen fearlessly approached childbirth while my grandmother feared for her life. My grandmother delivered my aunt, a ten pounder, a week after=2 0Aunt Helen’s funeral. Sixty-five years of living did not eras e the picture of seventeen –year- old Helen lying in a coffin, her dead infant girls cradled in each arm. This was her body, given up for her children.

When women volunteer to have their child’s birth televised on “Good Morning America” while wearing eye shadow and mascara, we tend to lose sight of the very serious business that is childbirth. We forget that every pregnant woman gives up her body for her child as the growing fetus harnesses every organ system of the mother’s body in order to sustain its growth. If any organ system is not up to the task, both mother and child can die.

Some women never recover completely from childbirth. They never lose the weight they gained during pregnancy. Others might develop varicose veins, diabetes, or high blood pressure. Some develop permanent uri nary tract or bowel problems from i njuries sustained during childbirth. These are our young bodies, which we have offered up for our children.

Each time a woman goes into labor, she travels into the valley of the shadow of death, a place one cannot imagine if one has not given birth. One of my neighbors who gave birth was appalled by the fact that I didn’t use anesthesia during the births of my children. I told her I was more stupid than brave and truly believed that I was giving my children the best possible start in life by not using drugs. This was comfort for my body, which I was willing to give up for them.

Childbirth is always accompanied by a certain amount of blood. The shedding of blood during childbirth used to render a woman, “unclean,” a verdict Christianity inherited from Judaism. Until Vatican II, a post partum woman was supposed to be “churched,” a ceremony which “purified” the mother of childbirth, so that she could return to communion. However, without the shedding of the mother’s blood, there can be no birth and no life. Even Jesus, born of Mary came into this world purple, wet, and slippery, covered with his mother’s blood. Mary gave her holy body and blood to Jesus. This was her body and blood, given up for him.

Two women I know almost hemorrhaged to death after giving birth. After birth, the uterus is supposed to contract and clamp off all of the blood vessels that supplied the placenta and nourished the baby during pregnancy. If the uterus fails to contract, the blood vessels remain wide open and blood gushes out of the woman with each beat of her heart. Both women described lying in a state of suspended animation as their blood poured onto the floor, knowing what was happening to them, but too weak to rouse themselves to call for help.

One looks at blood, at the bright red bewilderment of it, with awe, for it is life itself. How many of our foremothers saw this blood, felt it leave their bodies, and understood what it meant to shed every last drop of blood in order to give life to another human being!

On this Mother’s Day, I invite you to image God, who is truly beyond whatever paltry picture we might imagine, as Mother God. Imagine God our Creator as the Mother clothed in the sun, wearing star in Her hair, groaning in hard labor as She tries to give birth to a new heavens and a new earth where all mothers are forever freed of the sins of patriarchal misconceptions and misogyny.

Today on Mother’s Day, remember your mother. Honor all mothers in whom unborn babies once lived and moved and developed their very beings.

This is our body; this is our blood, given for the life of the world.