Mary of Nazareth: Liturgical Leader and Apostle in Early Church,, Queen in 900's and Passive Woman in 1500's

Posted by Bridget Mary Meehan at 10:18 PM No comments: 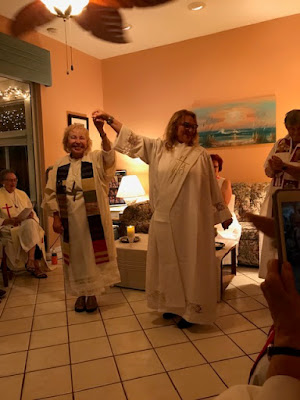 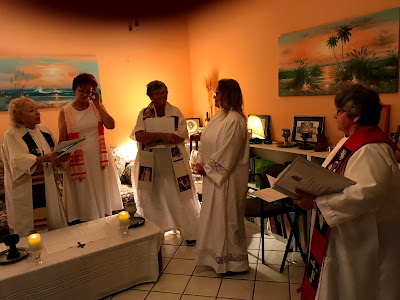 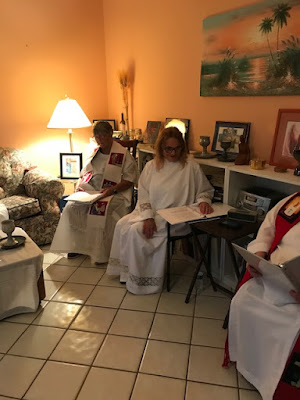 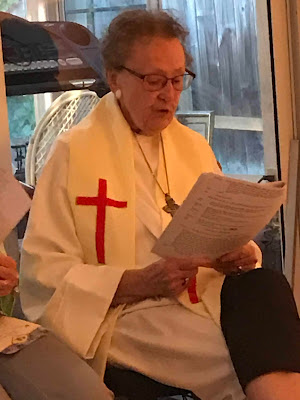 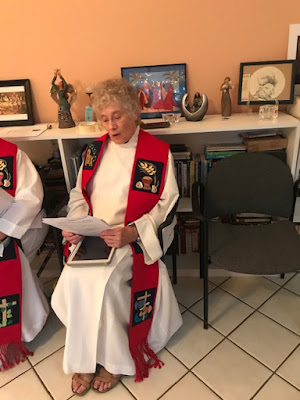 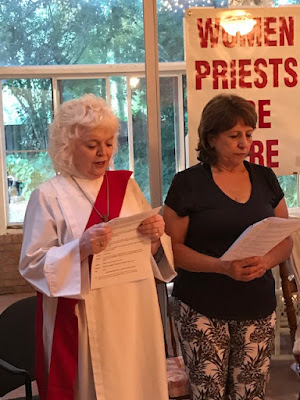 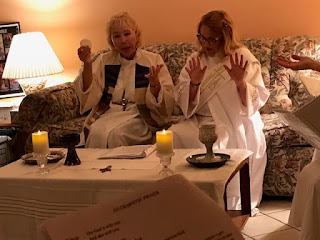 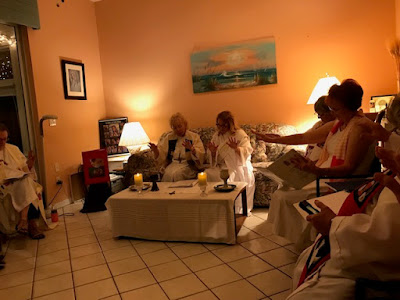 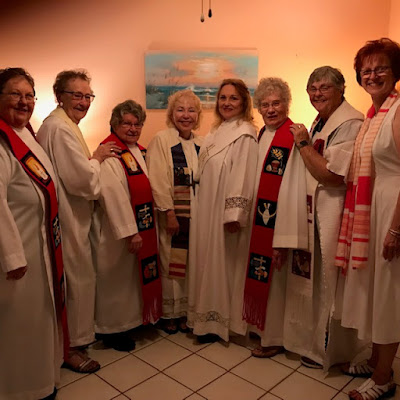 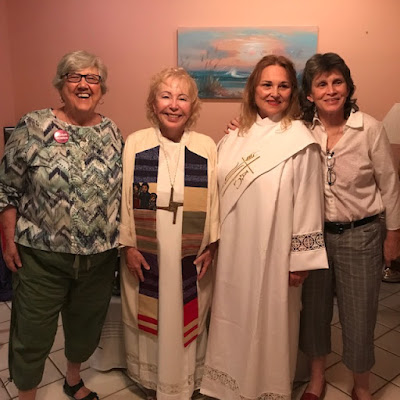 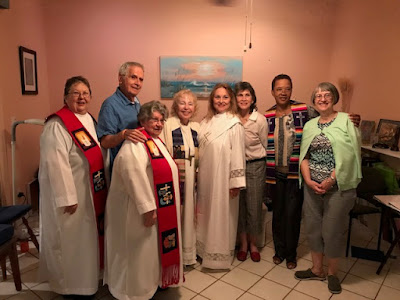 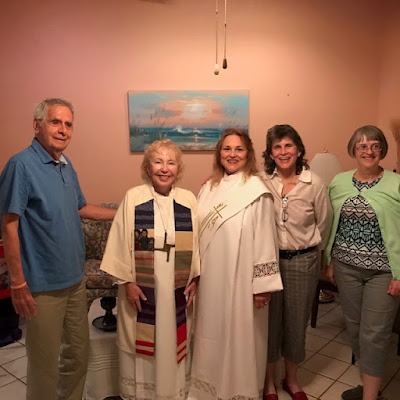 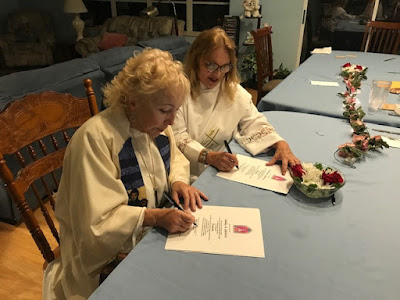 Bridget Mary: We rejoice as we gather to celebrate the ordination of Shelley Gilchrist as a deacon.

Shelley ‘s call is rooted in the Gospel of Jesus to celebrate the holiness of life and creation as the face of the holy among us. Shelley has come to this special evening in a lifelong desire to serve others. Whether befriending the outcast in elementary school to her current occupation as a chaplain for hospice, Shelley has been called to a ministry of presence; a desire to stand beside the most vulnerable among us.  She served as an educator in public high schools and was often a person of support for the kids who had been branded with a label.  She holds a master’s degree in Fine Arts and has had more than three years of theological training.  Through CPE, Shelley was introduced to Diane Dougherty and the Federation of Christian Ministries. In her pursuit of Commissioning, Shelley met her dear friends and mentors Miriam Picconi and Wanda Russell. While attending their faith group, Shelley began to experience the love and prophetic ministry of the Association of Roman Catholic Women Priests.  Reading our mission statement of inclusivity and justice struck a deep chord in Shelley’s heart.  After a period of discernment, the call to serve and work toward full equality for women in the Church was clear and palpable.  She asks for your prayers as she begins her service as a deacon in the Association of Roman Catholic Women Priests. “Here am I, God, send me,” is her daily prayer.

In our second reading, St. Paul commends Deacon Phoebe as a leader and missionary in the community of Cenchreae near Corinth. Phoebe was entrusted with the mission to proclaim Paul’s letter to the house churches in Rome. Her patronage assured Paul of financial support, hospitality and prestigious connections. This seems to indicate that Phoebe was a well-educated woman of independent means. Paul’s letter implies that not only did Phoebe use her resources to help him, but she also assisted people who were suffering, poor and oppressed. It seems evident from his commendation that Phoebe’s preaching, and ministry made a powerful impact on Paul and on the first century Church in Rome.

Contemporary scholars conclude that women leaders like Phoebe, Junia and the other women greeted by Paul in Romans were apostles, missionaries, and leaders of communities equal to and independent of Paul. They hosted eucharistic celebrations in their homes and spread the good news as followers of Jesus.

In Mary and Early Christian Women: Hidden Leadership, Dr. Ally Kateusz reveals representations of Mary Mother of Jesus in texts and images in the extracanonical gospels that provide evidence of her as an authoritative leader of the apostles, high priest and bishop. Her research shows evidence hidden for centuries by patriarchy on the role of women in the early Church.  In fact, there are two artifacts that depict women and men in a gender –parallel liturgy inside two prestigious churches - Old Saint Peter’s Basilica in Rome and the second in Hagia Sophia in Constantinople.

In fifth century Celtic Ireland, the stories of St. Brigit of Kildare portray her as a bishop and abbess of a double monastery of women and men, married and celibate who served the needy and who celebrated the blessedness of creation.

So it is evident that from the beginning Jesus called women to be disciples and treated them as equals, and women have served God’s people  as deacons, priests and bishops in the early centuries of Christianity and are doing so today!

Shelley: Who doesn’t love a great story? From our childhood days of bedtime books to the very intricate “who done its” on Britbox, we love to suspend our disbelief and enter the narrative of a well-told tale.  Jesus knew this.  His parables are colorful, simple, complex and life giving. Scripture is jam-packed with stories of intrigue and in the case of our gospel reading, human suffering.  Growing into a girl of about 12 or 13, the “story of the woman with the issue of blood” began to demand my attention.  One couldn’t escape her; she appeared in all three synoptic gospels.  I could not fathom how horrendous this affliction must have been!  In Sunday school this part of the narrative was hurried over, however, and the emphasis was on the incredible faith of the woman and the power of Jesus to heal. But I know now there is more for us; much more.

Let’s enter the story.  Jesus had just returned from a rigorous journey which included calming stormy seas and exorcisms.  This crowd welcomed him enthusiastically.  They knew him and waited expectantly for his teaching and companionship. During the welcoming, Jairus appeared at his feet; a ruler from the synagogue! Weeping he said, “My daughter, my only daughter who is but twelve years old is dying. Please Jesus, please come to my home and heal her!”  Jesus heard the sorrow and trust in Jairus’ voice and quickened his pace toward his home.

But there was another soul desperate for the love Jesus offered.  She could not travel with the crowd. She was unclean and had been for twelve excruciating years.  It is not lost on a reader that Jairus’ daughter was twelve and had not yet entered puberty; she was clean.  The woman, who may have been two or three times her age, had been hemorrhaging for twelve years; she was unclean.  There were twelve disciples, twelve tribes of Israel, but the head of those tribes and the “The Twelve” did not face the monthly shaming of menstruation, let alone twelve years of such agony. Is that irony intentional?

The laws of purity or who was in and who was out, were established long ago in the book of Leviticus. Women were considered untouchable for their entire period and seven days following.  I am hopeful that enough women were in sync in Israel’s villages that camaraderie of women shared stories and maybe even told some jokes about their men.  This strict stigma of uncleanliness even covered childbirth. If a woman were lucky enough to deliver a male child, she was considered impure for 40 days.  If one had a girl, well, you were cloistered for eighty. This very God-given natural cycle; essential for the continuation of all creation, was deemed unclean by the priestly patriarchs. Their mindset; “I don’t understand this…it’s weird and scary.  We don’t live with this, this thing, so it must be wrong.” Sigh. Did mothers pass babies around at arm’s length and with kid gloves? Was there a “first class” curtain separating parts of their humble abodes?

Returning to our woman in the gospel, how did she exist from day to day? Was she within her sister’s household in some hovel in the back? Was food passed under a curtain or door?  Did she try to cleanse herself? If she did, where? How many times did her caregiver need to wash her own clothes just for providing the bare necessities for another? But what if there were no sibling? When thinking of her I feel her profound sense of loneliness and quiet desperation.

Late one morning she heard a ruckus and calls from many of “Jesus, Jesus!” She must have quietly peeked out and realized it was that rabbi! It was this Jesus, whom others had said could bring hope, peace and yes, even healing! She had spent every last bit of her tiny inheritance seeking help from doctors, but nothing worked.  Maybe, just maybe if she could meet him or even touch the tassel from his prayer shawl she might have respect and inclusion from her village? But the crowd was moving more quickly now and she must hurry to catch a glimpse of this Jesus!  Breathing hard, she pulled her emaciated body up, grabbed a cloak and hesitatingly walked to the edge of the crowd; no one noticed her. “I can, I will do this” she thought and head down, nudged her way to the back of the rabbi. Closing her eyes and offering a quiet prayer to YHWH, she took hold of that worn, narrow, knotted rope. And then there was something. She took a quick inhalation of breath and she felt a spark, no, it was like a strong connection; like seeing an expected loved one from afar. Her breathing finally began to slow and she nearly stood upright. She heard a voice said, “Who touched me?” The sound of Jesus’ voice had the energy she felt. The crowd was standing very close to Jesus and now she hoped she would not be noticed.  But the teacher repeated, “I felt the power go out of me.” The Divine love in Jesus had connected with the purity of love within the “unclean woman.” As this woman knelt before Jesus and words of apology came tumbling from her, Jesus looked her in the eyes, took her hand and said gently, “Daughter, go in peace. Your faith has made you whole.” Imagine the gasps of the crowd.  Jesus, a rabbi, was not concerned about being unclean. Jesus saw this woman and she truly saw him. Richard Rohr states, “Jesus rejects violence and passivity.” Jesus did not just walk away and say, “Please stop berating that woman.  That is not a loving way to behave.” Jesus acted and so must we.

We know we have not yet shaken off the patriarchy that attempts to silence women, not just in the Church but in the culture as well. This mindset of dominance leads to abuse and at the very least being called “nasty” by some.  But with our growing numbers, voices and commitment, that lie is beginning to change. We will no longer be passive. We are letting go of our egoistic selves and seeing the Divine in each other.   We are prayerfully discerning how we can best light that spark of connection into a growing and holy fire of passion and light.
This is the story we are writing.  And I am living, tangible truth that stories can take unexpected and exciting turn. We are somewhere in the middle of this narrative and the best is yet to come.

Posted by Bridget Mary Meehan at 11:17 AM No comments:

https://www.newwaysministry.org/2019/08/24/u-s-bishops-applaud-trump-administration-proposal-allowing-anti-lgbtq-employment-discrimination/
Posted by Bridget Mary Meehan at 10:18 PM No comments: