/*O Key of David...scepter of the house of Israel,you open and you close without contest.To us who sit in darkness and the shadow of the grave,Come! unlock our prisons and our chains.*/My Dear Sisters and Brothers,Peace be with you this 20th day of December 2008
!It has been written that when God opens a door, no one can close it; and when God closes a door, no one can open it.Thus the Key of David, The Christ, without contest closes and opens doors to shepherd us and free us along our spiritual pathways.Closing the door of complacency and ignorance...Christ leads us instead through the gates of fruitful wisdom.Closing the door of worry and anxiety...Christ leads us instead through the gates of inner peace and trust.Closing the door of self-will...Christ leads us instead though the gates of true obedience, the surrender to Love.Opening the door of the prison of non forgiveness...Christ sends us forth to be reconciled in peace with ourselves and with one another.Opening the door of the prison of isolation...Christ sends us forth to taste communion with self, one another and the Spirit.Opening the door of the prison of fear...Christ sends us forth to love and to be loved without measure.May we with gratitude and thanks accept the closing of doors so that we might discern and discover new directions.May we accept the grace given us to recognize and enter the doors that stand open within the heart of God so that we might know freedom from darkness and walk as Children of the Light.Blessed be God forever!
With love and kind thoughts of you,Olivia of the Western Region - RCWP USA
Posted by Bridget Mary Meehan at 9:29 PM No comments:

December 18, 2008Catholic Church moves to excommunicate priest (Original title was Sexism in the Catholic Church)
Sexism, like racism, often is right before our eyes and we fail to recognize it or chose to ignore it.Many will not recognize sexism in the case of Father Roy Bourgeois, a Maryknoll priest of more than 36 years who is about to be excommunicated by the Vatican because he gave a homily at the ordination of a woman to the Roman Catholic priesthood last August.Rome is against the ordination of women even though the pope's own Pontifical Biblical Commission could find no scriptural reason for denying women the right to all seven church sacraments. Then in the tradition of men unable to formulate a reasonable theological argument against women's ordination, Catholics have been told the matter is not open for discussion.Most incredible is how quickly Rome reacted to Father Bourgeois' public support of women's ordination. Rome took less than three months to threaten this brave priest with the church's most severe punishment for confronting the sexist position that women are not good enough to serve God's people in an ordained capacity.Only three months! It has taken Rome years to react to predator priests in our church and not one of these criminal priests (or bishops) has been threatened with excommunication.Sexism will continue in the Catholic Church as long as we Catholics ignore what is happening and continue to support this bad behavior.
(Edited out of the original letter: Try sending your weekly tithe to a Catholic reform group and see how long it takes Rome to react to that one!)Tom Hill, Olympia
Posted by Bridget Mary Meehan at 9:17 PM No comments:

/*O Root of Jesse...standing as a sign to all the world,

before you ev'ry ruler silent bows,

and to you ev'ry nation will one day return for help.

My Dearly Loved Sisters and Brothers,

Ringing in the ears of my heart as well as in the ears of my mind is the
word "root". The Christ was and remains deeply rooted in God, inviting
us into a silent awareness of our rootedness in, with and through him,
our beloved brother.

How many false roots of ego, sown in the darkness of our ignorance of
the Light, are we invited to uproot, first of all in ourselves, in order
to stand as the signs to all the world we have been created to be? How
willing are we to return to the taproot, The Christ, for help and
recreation?

So often we are busy saving the world, saving the Church, saving
others. Yet the greatest gift we can give to all, to and with whom we
are called by God, is first to allow ourselves to be saved from our
false selves so that we might come home to our true selves, and thereby
help show others the way.

Indeed, in openness may we pray, "come and save us...we can wait no more!"

With love at Advent and always,
Olivia of the Western Region - RCWP-USA
Posted by Bridget Mary Meehan at 2:38 PM No comments: 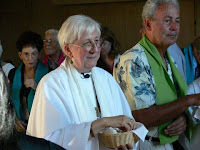 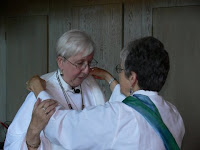 (Olivia Doko on the left and Juanita Cordero on the right)
*O Adonai...and tender of the house of Israel,appearing as a fire in the bush,who from the mountain top has handed down the Holy Law,Come! and hold us in redemption's arms! */My Much Loved Sisters and Brothers...Moses saw a flaming bush and recognized Whose Spirit was in that bush...and so he removed his sandals...and, grounded on the earth and its energy, opened his heart and his intellect to receive that which the Spirit would give...give not only for Moses, but for all humankind.We, too have seen a burning bush, sent to instill in each of us the vision for a renewing Church where all can know the healing of their lives' journeys, be welcomed at table, and be empowered to serve one another and the world...even the cosmos. How can we do other than to sing a hymn of gratitude and praise!As we sing, may the fire of Adonai burn with strength in our hearts so that we become living, flaming burning epistles through whom the Good News, which fulfilled the law, is preached with our every breath.
Olivia Doko
RCWP - Western Region - USA
Posted by Bridget Mary Meehan at 9:25 PM No comments: 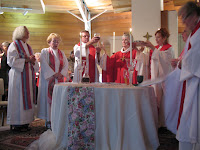 WASHINGTON, DC - Today, over 100 women religious go public in their support of women's ordination and Roy Bourgeois, the Maryknoll priest who was informed by the Vatican that he would be excommunicated if he did not recant his support of women's ordination within 30 days. He did not recant, and no further communication has been received. In collaboration with the campaign spearheaded by the Women's Ordination Conference (WOC), titled "Break the Silence. Shatter the Stained-Glass Ceiling." the National Coalition of American Nuns (NCAN) wrote the letter addressed to the Congregation for the Doctrine of the Faith. The 113 signatures add to the over 200 women religious that signed two petitions in conjunction with the "Break the Silence" campaign since November 11, when WOC opened the first petition. "Catholic women religious are among the most prophetic people within our Church," stated Aisha Taylor, executive director of WOC. "The Vatican has intentionally created an atmosphere of fear and intimidation, and the women who signed the letter and our petitions add their voices to the thousands of WOC members who, for over 30 years, have called for women's full inclusion in the Roman Catholic Church. Many of the signers have been members of WOC since the first conference in 1975." Among the signers are Sr. Joan Chittister, OSB, who defied the Vatican in 2001 and spoke at the first Women's Ordination Worldwide conference in Dublin; Sr. Theresa Kane, RSM, who made national headlines when she publicly requested, with Pope John Paul II sitting near-by, that he ordain women; Sr. Ivone Gebara, CND, one of Latin Americas leading theologians. Bourgeois' threat of excommunication is the second attempt this year in silencing the voice of women and men religious who prophetically stand in support of women's justice and equality in the church. On June 26, Sr. Louise Lears, a Sister of Charity who dedicated her entire life to serving the Church, was penalized by Archbishop Raymond Burke of St. Louis for attending the ordination of two Roman Catholic women. The Pontifical Biblical Commission found in 1976 that there is no scriptural reason to prohibit the ordination of women. The Bible describes how women were prominent leaders in Jesus' ministry and early Christianity. In all four gospels, Mary Magdalene was the primary witness to the central event of Christianity-Christ's resurrection.

"It is long overdue for the Vatican to respond to the church's need for an inclusive clergy, which embraces women--all of whom are created equal and can be called by God to serve as priests in an accountable and inclusive Catholic Church," Taylor concluded.

December 12, 2008Cardinal William Joseph LevadaCongregation for the Doctrine of FaithPiazza del S. Uffizio 1100193 Roma, ItalyDear Cardinal Levada:
The Vatican's threatened excommunication of Fr. Roy Bourgeois because of his belief in the priestly ordination of women has diminished our Church.
As women religious who love our Church and who have served the People of God for decades, we support our brother Roy. As a Maryknoll priest for 36 years, he has followed the Gospel of Jesus in his ministry for peace and justice by speaking out against the war in Iraq and against the torture of countless human beings, aided and abetted by the U.S. government's School of the Americas. He has been a prophetic voice for thousands in our society.
Roy is now a prophetic voice in our church because of his support for women's equality in all Church ministries. Excommunications depend not on edicts or laws, but on compliance. We do not believe Roy is outside the community and we embrace him wholeheartedly. Like Roy, we know women who testify that they are called to priesthood. We know that Jesus did not discriminate in calling both women and men to ministry. And we know that our church needs the gifts of everyone called.
So we join Fr. Roy Bourgeois and the majority of U.S. Catholics, who believe that women are called to priestly ordination in the Catholic Church. We look forward to the day when Catholic women, following in the footsteps of Mary Magdalene who announced the Resurrection to the male Apostles, will minister as full equals in our church.

For more information,
please visit
http://rs6.net/tn.jsp?e=001ojXaxiLLmLyyWt4WwqkctuyR6kisZol8wO_gqTpcl9sQGwWpOJAcalDt4pXTRGtDFKnlPmAY9Rjk1b_tDM31qDK5VXBI7hj7qaEbD_kRFV4V02xkusuNv_XnUtdTOLp-
Founded in 1975, the Women's Ordination Conference is the oldest and largest national organization that works to ordain women as priests, deacons and bishops into an inclusive and accountable Catholic church. WOC represents the 63-70 percent of US Catholics that support women's ordination. WOC also promotes new perspectives on ordination that call for more accountability and less separation between the clergy and laity.
Posted by Bridget Mary Meehan at 7:07 PM No comments: 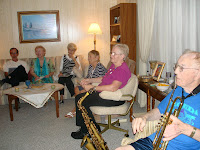 Posted by Bridget Mary Meehan at 2:02 PM No comments:

Jules Harts, a documentary producer from California, has spent 3 years working on this new documentary film.
The trailer is now up on youtube.
Go up and check it out and write your comments on youtube.
Bridget Mary
Posted by Bridget Mary Meehan at 11:39 PM No comments: