Five Roman Catholic Women to Be Ordained in Louisville, Kentucky on Dec. 8 as Vatican Unveils Frescoes in St. Priscilla’s Catacomb with Evidence of Early Women Priests
(See “An invitation to Pope Francis” at end of press release).
While the Vatican denies priesthood to women, ancient catacombs reveal evidence of women priests, deacons and bishops.  Here is link to the discussion with an ARCWP woman priest and Greg Reynolds, the Australian priest who was recently excommunicated by the Vatican for his support of women priests and marriage equality.  For more than 35 years Catholic theologian, Dorothy Irvin, has been researching evidence of women priests in early Christianity. You can reach her at 612-387-3784.
http://au.tv.yahoo.com/sunrise/video/watch/20093076/controversy-racks-vatican-church/
From: The Association of Roman Catholic Women Priests (ARCWP)
Release date: Sunday, December 1, 2013
Contact: Janice Sevre-Duszynska, D.Min., (Media) rhythmsofthedance@gmail.com, 859-684-4247
Bishop Bridget Mary Meehan, sofiabmm@aol.com,
703-505-0004
See www.arcwp.org
http://bridgetmarys.blogspot.com/
Celebration of Priestly Ordination for Mary Sue Barnett of Louisville, KY, marysusan.arcwp@gmail.com, 502-296-8653
Celebration of Ordination to the Diaconate for:
Denise Menard Davis of Louisville, KY, denisemenard.davis@twc.com, 502-552-8769
Ann Harrington of Greenville, North Carolina, all826@suddenlink.net, 252-758-5036
Betty H. Smith of Louisville, KY, bettysmith12@insightbb.com, 502-333-0457
Mary Weber of Indianapolis, Indiana, Mfweber1@comcast.net,
317-570-9464
On Sunday, December 8, 2013 at 3 p.m. Mary Sue Barnett will be ordained a priest and Denise Menard Davis, Ann Harrington, Betty H. Smith and Mary Weber will be ordained deacons. The presiding bishop will be Bridget Mary Meehan. The ceremony will take place at 3 p.m. at Central Presbyterian Church in Louisville, 318 W. Kentucky St., Louisville, KY 40203 (502-587-6935).  All are welcome.
Media are invited to interview the candidates, women priests and bishop at 1 p.m. at the church. Call Janice (859-684-4247) to schedule an interview. Respectful filming/photo-taking during the ceremony is acceptable.
The ordinands are theologically prepared and have many years of experience in ministry.
Mary Sue Barnett of Louisville is married to Richard and they have two sons. She mentors a young adult faith activist group called Revealing Sophia’s Truth and she is co-founding a Kentucky Coalition for the ratification of the United Nations human rights treaty for women (CEDAW).  “I long to embrace girls and women worldwide through the women priest movement that seeks to renew the institutional church. I want to bring hope and healing in a world where misogyny inflicts violence, “ she said.
Denise Menard Davis of Louisville, a wife, mother and grandmother, brings the experience of having taught and served high school and university students in Kentucky and California, gaining wisdom she now longs to share with others. In accepting this call, Denise seeks only to offer her fullest self to serving God’s creation.
Ann Harrington of Greenville, NC, has been married for 36 years and is a mother to four sons, a spiritual director and community builder. She feels called to minister to Catholics who have left the church but long for a connection to the Mass, sacraments, community and the social justice dimension of Catholicism.
Betty H. Smith, 79, of Louisville has taught in local Catholic elementary schools and served as principal at Mother of Good Counsel and St. Barnabas. She has four children, three stepchildren, 13 grandchildren, and two great-grandchildren. Her husband, Dr. Amory C. Smith, is in a nursing home and Betty hopes to create support groups for families of residents in long-care facilities.
Mary Weber of Indianapolis is a wife, mother and grandmother who served as a pastoral associate, a social worker and hospital administrator. She envisions a church community of equals where all are truly welcomed at the table. She plans to minister with the sick, dying, and grieving as a volunteer chaplain at a nursing home.
On November 19th the Vatican unveiled restored frescoes in St. Priscilla’s Catacomb in Rome.  See: http://www.windstream.net/front_controller.php/news/read/category/Top%20News/article/ap-vatican_unveils_new_frescoes_in_top_cata-ap
The Association of Roman Catholic Women Priests calls on Pope Francis to embrace the full equality of women, including women priests.  We women priests ask Pope Francis and our brother priests at the Vatican to follow Jesus’ example of Gospel equality and the early church’s tradition of women in liturgical leadership as deacons, priests and bishops.
Says Catholic theologian Gary Macy in The Hidden History of Women’s Ordination:  “In Christianity, ordination was the process and the ceremony by which one moved to any new ministry (order) in the community. By this definition, women were in fact ordained into several ministries…References to the ordination of women exist in papal, episcopal and theological documents of the time, and the rites for these ordinations have survived.”
In calendars on “The Archaeology of Women’s Traditional Ministries in the Church,” Catholic theologian, Dorothy Irvin, gives evidence in frescoes, mosaic, tombstones and catacombs in Rome and around the Mediterranean of women deaconesses, priests and bishops in Early Christianity up until the 12th century.
The Association of Roman Catholic Women Priests invites Pope Francis to pilgrimage through the ancient catacombs of Rome with Dorothy Irvin whose life work has been devoted to uncovering evidence of women’s leadership in early Christianity. Dorothy has a pontifical doctorate in Catholic theology from the University of Tuebingen, Germany, with specialization in Bible, ancient near eastern studies, and archaeology.
Posted by Bridget Mary Meehan at 12:27 PM No comments:

A Woman Priest from South America Responds to Pope Francis: "The Denial of the Priesthood Is Questionable"

http://judyabl.wordpress.com/2013/12/05/blossoming-out-of-a-tree-cut-down-homily-for-the-second-sunday-in-advent-12813/
“On that day,
A shoot will sprout from the stump of Jesse;
From Jesse’s roots, a branch will blossom.
The Spirit of God will rest there…” (Is 11: 1-2a).
Have you ever felt like a tree cut down? Like a dead, sap bleeding, or dying stump instead of the flourishing tree you were before the axe of life’s events did its work? Do you know people who have been cut down before they could even grow? Or those who grew well until hard events cut them down? I know and serve such people and I know what it feels like to be a tree cut down. Poverty is a great axe that cuts new and older trees down without mercy. After almost thirty years of serving the homeless, I still wonder how anyone survives it. How physical survival is possible let alone emotional and spiritual survival. I have learned sadly that some do not survive. We have a Wall of Remembrance in our church where candle lights remind us of the lights that went out while homeless. But most do survive and I see those shoots coming forth and blossoming every day. It is a miracle of the spirit. Yet, if I do not speak and act prophetically, if we all do not cry out at the structures that continue to produce homelessness and act to remedy it, we are silently and tacitly in the tree cutting business. 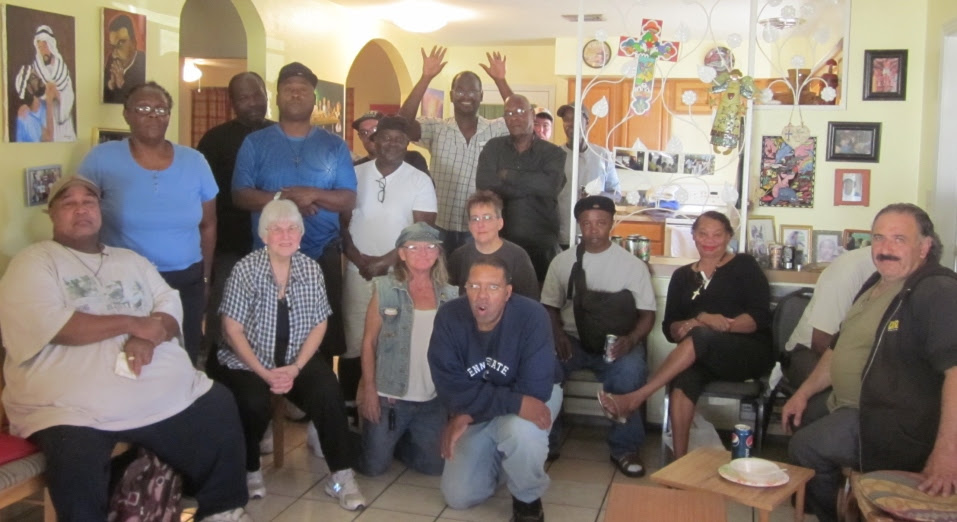 "Silent Night for the Cosmically Inclined"

http://www.youtube.com/watch?v=DtyDxjwd7oU&feature=youtu.be
Posted by Bridget Mary Meehan at 4:13 PM No comments:

http://judyabl.wordpress.com/2013/12/03/hooray-my-new-book-the-house-on-sunny-street-is-now-on-kindle-and-nook/
Posted by Bridget Mary Meehan at 12:05 PM No comments:

Does Pope Francis Sneak Out of Vatican to Comfort Homeless? May He Embrace All Who Are Marginalized


"A knowledgable source in Rome told The Huffington Post that "Swiss guards confirmed that the pope has ventured out at night, dressed as a regular priest, to meet with homeless men and women."
Krajewski earlier said, “When I say to him ‘I’m going out into the city this evening’, there’s the constant risk that he will come with me," and he merely smiled and ducked the question....

Bridget Mary's Blog
Pope Francis is living the Gospel of  Jesus of Nazareth. He comforts the homeless and challenges us to transform unjust economic structures that keep people in poverty.  The disparity between rich and poor is morally wrong.  Pope Francis reminds us that we must live the vision that we advocate. So too, may our blessed Pope see women in our church as beloved sisters and equals in all ministries including a renewed priestly ministry in a community of equals that invites all to celebrate the sacraments at the Banquet Table, not just those who keep the rules of the Roman Catholic Church. Will Pope Francis see the face of Christ in everyone in the church and open the sacraments to those who are excluded, for example, the divorced and remarried and the many other groups that are marginalized in our church today? Let us pray that it may be so. Bridget Mary Meehan, www.arcwp.org, sofiabmm@aol.com

Pope Francis' blessing this sculpture is a powerful sermon of his solidarity with the poor and his recognition of the face of Christ in all those who suffer from economic injustice and global inequality. I pray for the day that Pope Francis will recognize the face of Christ in Roman Catholic Women Priests. Bridget Mary Meehan www.arcwp.org, sofiabmm@aol.com
Posted by Bridget Mary Meehan at 3:49 PM No comments: