Saturday, June 11, 2011, the eve of Pentecost,
in the St. Barnabas Chapel at the Cathedral of St. Anthony
in Detroit, Michigan, the Gateway to Freedom City.
Archbishop Peter Paul Brennan of the Prelature
was the presiding consecrator
and was assisted by Bishop Christine Mayr-Lumetzberger,
RCWP, from Austria, Bishop Andrea Johnson, RCWP
and Archbishop Dr. Karl Rodig, ECCC, the Cathedral’s pastor.

"Long time FCM member, Rev. Dr. William J. Manseau has been consecrated a bishop in the Roman Catholic Church! This took place by authority of the Married Priests Now Prelature initiated by Archbishop Emmanuel Milingo, a Roman Catholic bishop who has married as a member of the world wide movement for a married priesthood catalyzed by Vatican Council II. While recognizing that such an action, while valid, is “contra legem” or contrary to ecclesial law, it is done as an act of conscience and faith in the belief that the law is impeding the life of the Church and as such violates the supreme law of the Church which is the salvation of souls (CJC, can. 1752) and need not be observed.

The momentous event occurred on Saturday, June 11, 2011, the eve of Pentecost, in the St. Barnabas Chapel at the Cathedral of St. Anthony in Detroit, Michigan, the Gateway to Freedom City. Archbishop Peter Paul Brennan of the Prelature was the presiding consecrator and was assisted by Bishop Christine Mayr-Lumetzberger, RCWP, from Austria, Bishop Andrea Johnson, RCWP and Archbishop Dr. Karl Rodig, ECCC, the Cathedral’s pastor.

Some twenty FCM members were in attendance and joined the ceremony when each laid on hands to invoke the power of the Holy Spirit upon William and to signify their assent to his consecration as bishop. Bishop Manseau intends to devote much of his episcopacy in efforts to extend nationally the reach and influence of the St. Barnabas Mission, an FCM community member.

In reflecting on this spiritual and emotional moment, William observed, “This is the culmination of a multi-year process of discernment and guidance. Upon the call of God and the International Society of the Apostles, Sts. Peter, Thomas and Mary Magdalene, an FCM member community, and after a lifetime of priestly service through the Federation of Christian Ministries and CORPUS, I felt comfortable and compelled to take this step.” He did this, he said, to be in solidarity with the bishops of the Roman Catholic Women Priests Association (RCWP), to make available the support of episcopacy, in particular, to married Catholic priests, Catholic women priests and other faithful and spiritual seekers. He recalled also that Sr. Joan Chittister, OSB had challenged the American Catholic Council participants to “take a leap” in faith on behalf of the renewal of the Church. In a serious and moving introduction to the ordination ceremony, William traced his experiences and epiphanies that led him to the altar where we gathered.

The Federation of Christian Ministries wishes to extend its congratulations to William, not only for this present blessing, but also a robust thank you for Bill’s lifetime of blood, sweat and tears in the vineyard of the Lord and for his efforts to return the Catholic Church to the vision each of us had in earlier days as we experienced or learned of Vatican Council II. Thank you, Bill."

Best wishes to Dr. Bill Manseau in his new episcopal ministry! Bill and I have collaborated as members of FCM's Circle. With Gerry Grudzen, Bill and I dreamed a new dream together in the creation of Global Ministries University, an online religious studies degrees program to equip ministers with theological/pastoral courses which prepare them to serve God's people. www.globalministriesuniversity.org

I am delighted that, Bill, a dedicated minister of the Gospel, is now a bishop. He will be a great blessing to Catholics especially those of us who are working for the reform and renewal of the Catholic Church. I am hopeful that Bishop Manseau will offer married men, called to serve a faith community as priests, a path to fufill their vocation within the supportive network of married priests who have had years of experience in parish ministry and who left because of the celibacy requirement. What a powerful charism and great opportunity for wisdom sharing!

It is significant that Roman Catholic Women Bishops, Christine Mayr-Lumetzberger and Andrea Johnson participated in the ordination rite. The Roman Catholic Women Priests Movement is blessed as we collaborate with bishops, like Bill and Married Priests Now, on our journey in an inclusive priestly ministry in a community of equals. We are kindred spirits in the transformation of our beloved church as together we live Gospel equality now!

Posted by Bridget Mary Meehan at 8:11 PM No comments:

"According to the suit, Dewane used his "power and position" to have Wilson fired as "punishment, retaliation and a lesson to others similarly situated within the Venice Diocese."

Posted by Bridget Mary Meehan at 5:10 PM No comments:

...." can anyone doubt that women priests would be less likely to protect their deviant peers?Just as Pope Urban silenced Galileo but not his truth, Rome today has banned discussion of a female priesthood. Yet the “sense of the faithful” has moved beyond the sexism and sexual dread of Church leadership."

"Bishop Finn, your people are angry. Your many good priests are humiliated. I do not call on you to resign or to implement weak reforms of the current system. I call on you to speak out for sweeping reform of the priesthood — for women’s ordination and optional celibacy. That would be more powerful than any apology." 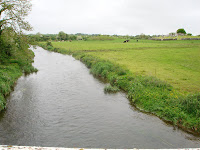 "Holy Sacred Spirit, breathe your breath on us. (2 times)

Holy Sacred Spirit, breathe your life in us."

Breathe in God's Presence that surrounds you, is within you, and is moving through you with every breath you take.

Every day is a miracle.

Smile. You are loved infinitely...

Every day you live enfolded, embraced and empowered


"The first time the Rev. Charles Murphy was cleared of accusations that he improperly touched a minor, a girl 25 years earlier, everyone who ever met him said they had never doubted his innocence.
It was 2006 and priests were all over the news for every awful reason, most of them deservedly so. But Father Murphy swore his innocence, the archdiocese ruled the allegations lacked substance, and the woman dropped her suit on the eve of trial."

It is important that the process for handling complaints is transparent and just.
The testimony of Fr. Murphy's parish speaks volumes for the supportive role that the Catholic parish can and should play in the healing process for a priest who is innocent and suffered so much.
Justice for victim and accused is essential in the process. That is one reason why a review board is necessary.

Fr. Murphy died on June 11. 2011:
http://www.legacy.com/obituaries/wickedlocal-weymouth/obituary.aspx?n=charles-j-murphy&pid=151906259
The bishop should not control the process or be the one who decides which allegations to report to civil authorities. The Vatican is misguided here too when they insist that the bishop is the one responsible for reporting credible allegations to civil authorities. (Fox guarding hen house snydrome)
The U.S. bishops coverup and Vatican mishandling of the global sexual abuse crisis is the debacle that has inflicted so much damage on the Catholic Church and broken the hearts of thousands of innocent victims. It also has destroyed the credibility of the institutional church. And the people now must take action and hold the Vatican and bishops accountable. Just when will we ever learn?
Bridget Mary Meehan ARCWP
Association of Roman Catholic Women Priests
www.associationofromancatholicwomenpriests.org


Posted by Bridget Mary Meehan at 5:15 PM No comments:

http://ncronline.org/news/accountability/bishops-squandered-opportunity-victims-group-says
In a press release the day before the bishops' meeting, BishopAccountability.org called for these changes to the charter:

Mandatory reporting of all allegations of sexual abuse to diocesan review boards, "not just the ones that the bishop selects";
(Bridget Mary: Another example of the fox guarding hen house, this is a repeat of bad behavior that fosters cover-ups. Isn't this really about power and control!)

Beefing up "zero tolerance" by demanding bishops "immediately remove priests who are accused of abuse," arguing that "currently, accused priests can continue to minister for months or even years at the discretion of the bishop";
(Bridget Mary: A no brainer, of course, -- protect children, instead of protecting perpetratorse. How many more billions will Catholics in the pew pay before they stop giving funds to dioceses where abusive priests stay in ministry?What does it take to stop this train wreck from destroying the church? Ask yourself: is this behavior befitting a community of faith that we can be proud of? Boycott the funds, people of God, put your money in escrow and/or give directly to the poor.)

Reinstatement of appellate review boards so abuse survivors would "be able to appeal a review board decision";
(Bridget Mary: Sounds like a fair process)

Tightening confidentiality agreement language to address situations where it appeared "that survivors are still being coerced into signing" them;
(Bridget Mary: How about compassionate care for victims and a fair process for accused? )

Develop a "strict code of conduct" for victim's assistance coordinators in wake of evidence of "betrayal of survivors … recently revealed in Philadelphia and Cleveland";
(Bridget Mary: Of course, we need a strict code of conduct, so sad that this disgraceful chapter of intimidation of victims, abuse of power by the hierarchy continues.)

Specifying that "any bishop who abuses a child or enables the abuse of a child, or has done so in the past" be reported to civil authorities, not the papal nuncio as the bishops' revisions propose.
(Bridget Mary:You have got to be kidding, reporting to the papl nuncio does not pass the straight face test!)

Bridget Mary: Kudos to the courageous people at Bishop Accountability for speaking truth to power and calling for genuine reform of our broken system in need of systemic change in the Catholic Church now.

Posted by Bridget Mary Meehan at 9:20 PM No comments: