After the bishops lay hands on ordinands in ordination ritual, community lay hands on to signify the community's affirmation of ordinands. In this picture Bridget Mary is in the center

ROMAN CATHOLIC WOMENPRIESTS
"Judith A.B. Lee. left, joined Gloria Carpeneto and Gabriella Velardi Ward at last Sunday's ordination in Boston.
Judith A.B. Lee of Fort Myers wanted to be a minister since her teenage years, when she would visit the sick and elderly with her Methodist pastor in Brooklyn after youth group meetings."...

''We are really devoted to the Roman Catholic tradition,'' Meehan said, adding, ``We are just as much Catholic as the Pope and male bishops are Catholic.''
Read complete article by clicking on link:
http://www.miamiherald.com/living/religion-values/story/617406.html

Posted by Bridget Mary Meehan at 11:21 AM No comments: 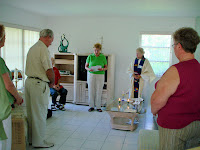 Roman Catholic Womenpriests Walk in Footsteps of Joan of Arc
Author: Bridget Mary Meehan
Posted by: Editor on June 20, 2008 1:00:00 AM Print ThisSend to a friend
It is ironic that the hierarchy fails to read their own scholars research. The Vatican's own Pontifical Biblical Commission concluded in 1976 that they found no evidence in Scripture to prohibit women from being ordained.

St. Joan of Arc followed her conscience and refused to obey the hierarchical authorities of her time. This example of holy obedience cost her life. It cost Roman Catholic Womenpriests excommunication by Vatican officials.
http://www.newcatholictimes.com/index.php?module=articles&func=display&ptid=1&aid=295
Posted by Bridget Mary Meehan at 9:44 PM No comments:

I am currently headed for Jakarta today and a week in Indonesia. A public lecture in Jakarta on the 25th and a Mass in Yogyakarta on the 27th.
I have some entries I've posted to my blogspot that I hope you will have a chance to visit. Also, below is an address for Flickr. I'm not sure if you can get it, try. There are numerous pictures there of the ordination I was part of in Bangkok at Ven. Dhammanda's Songdhammakalyani. The ordination was of a young woman named Diep. She was ordained as a "deacon" /samenari. In the ordination ceremony I was asked to wear by alb and stole and they also used the WOC chalice that I gave to Dhammananda.
The blogspot address is: http://www.womanpriest-asia08.blogspot.com/
The address for the flickr photos is:
http://www.flickr.com/photos/28862175@N06/
Blessings and Hugs to all,
Victoria Rue
Woman priest in Asia!
Posted by Bridget Mary Meehan at 10:11 AM No comments:

Church errs in casting out women, but not predator priests
By Margery Eagan Tuesday, July 22, 2008
http://http://www.bostonherald/.com
The latest uppitty women to get whacked by the Roman Catholic Churchare would-be priests Judy Lee of Florida, Gloria Carpeneto ofMaryland and Gabriella Verlardi Ward of New York.Sunday in Boston all three were "ordained" in a ceremony run by a pro-women priest organization. The Archdiocese of Boston promptlydeclared that the women had automatically excommunicated themselvesby such action. Their excommunicable sin: yearning to dedicatethemselves to the church and faith they love.
Article URL:
http://www.bostonherald.com/news/opinion/columnists/view.bg?articleid=1108361=
Role of women in the Catholic Church questioned
Mary Ann McCarthy Schoettly, of Newton, is ordained a Roman Catholic deacon by Bishop Dana Reynolds, of California, during a ceremony in Boston on Sunday.
By BRUCE A. SCRUTON
bscruton@njherald.com
NEWTON -- If the Catholic Church is just the hierarchy in Rome and the Vatican, then Mary Ann McCarthy Schoettly admits she is acting outside the church.
"But there is difference between the official church and what I see the church as the people," said Schoettly.
Despite a promise of immediate excommunication, Schoettly was ordained a deacon in the Roman Catholic faith on Sunday in the same Boston ceremony that ordained three other women as priests.
The women belong to an organization known as Roman Catholic Womenpriests, which portrays itself as not a splinter group of Catholics, but Catholics working within the church and advocating change.
That change, they argue, is actually reverting to the church's roots, where women acted as priests and leaders and, some say, were the "apostles to the apostles" because it was women who brought the news that Christ had risen.
http://www.njherald.com/story/22DEACON-web
Three women risk being excommunicated for desire to be priests
7 News Boston
http://www1.whdh.com/news/articles/local/BO82909/

Posted by Bridget Mary Meehan at 12:06 PM No comments:

Roman Catholic Womenpriests Ordinations: Laying on of Hands by Bishops and Community

http://video.google.com/videoplay?docid=-8780380555616601555
http://video.google.com/videoplay?docid=5276277604411195303
In the first clip, Bishop Dana Reynolds, first U.S. elected bishop from Western region and Bishop Ida Raming from Stuggart, Germany ordains Gabriella Velardi Ward, Judy Lee, and Gloria Carpeneto to the priesthood. Laying of hands by the bishops is done in silence and after bishops Dana and Ida lay hands on the women, representatives of the community lay hands on the women as a sign that the women were called by God from the community the community to serve the community. "The Council of Chalcedon in the fifth century taught that ordination of a priest or deacon was illegal as well as null and void unless the person being ordained had been chosen by a particular community to be its leader." (Ministry Leadership in the Community of Jesus Christ by Schillebeeckx) Roman Catholic Womenpriests are following this important teaching of the early church. In the second clip, the womenpriests have just been ordained.
http://www.romancatholicwomenpriests.org/
Posted by Bridget Mary Meehan at 11:45 AM No comments:

You could the feel the presence of the Holy Spirit in the joyful prayer and affirmations of the people gathered in Church of the Covenant. Congratulations to Gloria Carpeneto from Baltimore MD, Judy Lee from Ft. Myers, Fl, Gabriella Velardi Ward from NY, New York and Mary Ann Schoettly from Newton, New Jersey! They were radiant as were Bishops: Dana Reynolds from California and Ida Raming from Stuggart, Germany. Juanita Cordero from CA was in the middle taking care of holding books etc. Jean Marchant and Ron Hindenberg from Boston were mc's. Hope you can feel the joy in the youtube movie!!
All media covered, NBC, FOX, CBS, CNN. TV and print press coverage started on Friday, continued on Sat. and a large group came on Sunday. On Sat. the story of the women's ordination ran on the CNN headline news and repeated every 15 minutes.The Boston Globe did an article on Friday and Monday .The Boston Herald was present also. As you find clips, and links, please send them to me at sofiabmm@aol.com
May your day be grace-filled.
Bridget Mary

Boston Globe article that was in newspaper on July 18, 2008
http://www.boston.com/news/local/articles/2008/07/18/3_women_to_be_ordained_catholic_priests_in_boston/
Posted by Bridget Mary Meehan at 10:41 AM 7 comments: