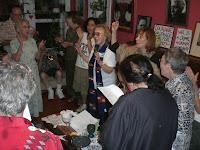 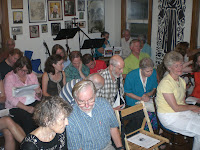 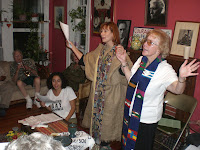 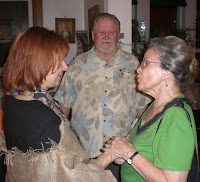 Blessing and Departing Hymn: We are Marching in the Light of God
http://video.google.com/videoplay?docid=-8807409996662520447
Homily Text:
During my 20s and 30s I wrote plays। In 1980 when I was 30, I began work on my musical, ALTAR GIRLS, which has never been produced। Set in 1962 during Vatican II, it is about a young girl, Bibbianna, who wants to become an altar girl. Every Saturday morning when she cleans the sanctuary and priests'sacristy with Sister Joan, she tells her about her desire to become an altar girl. As time goes by, Sister Joan decides to take on Bibbi's quest as a lark at first. Later, however, her consciousness rises and not only does she support Bibbi, but she is able to name sexism in the church. In doing so she finds herself in trouble. The following dialogue is from Act II and it is between Bibbi and her parish priest.
BIBBIANNA: I've come here again, Father, to tell you that I still want to be an altar girl.
PRIEST: Now just a minute, little girl.
BIBBIANNA: I told you last time that I've memorized the Latin. Where to stand during Mass...
PRIEST: And I told you that the Catholic Church has a pope who's a man, priests, bishops and cardinals who are all men. You realize, of course, that Jesus was a man.
BIBBIANNA: Yes...
PRIEST: And you believe he was the Son of God
BIBBIANNA: Yes...
PRIEST: For two thousand years everyone's believed this. Should the Church change a rule just for you?
(She opens up a book.)
BIBBIANNA: It says here in the Bible: "Let us make man in our image, in our likeness. In the divine image, male and female they were created."
PRIEST: I'm well acquainted with that passage.
BIBBIANNA: If women are in God's image, God must be part girl.
PRIEST: Such blasphemy! Say the Creed, the pledge of allegiance to our faith. Now!
BIBBIANNA: I believe in God the Father Almighty...
PRIEST: Does it say "Mother?"
BIBBiANNA: No...but in the Bible the Holy Ghost is referred to as "her," in feminine pronouns. As a woman.
If you believe the Bible to be God's word, Father, then God is also part woman.
PRIEST: And I suppose God wears lipstick so She can look pretty.
BIBBiANNA: I don't know what God wears. But my Mother doesn't always wear lipstick, and she looks just as pretty without it.

Switch to Act III – Today some 46 years later…
What’s changed in our thinking about relationships…
…How have we been converted…changed…in our relating to people of different races, of different lands and customs, to the homeless, to homosexuals, to God, to the Earth…to women in our world community…and women in the Church.
We have begun to see the Feminine face of God…
Bibbianna can now be an altar girl…and women – like me, a grownup Bibbiana, are following their call. We can be who God calls us fully to be –even a Roman Catholic priest.
Within a renewed priesthood – we can transform our Church into the justice and peace vision of the Beatitudes – where men and women are called anew into the discipleship of equals – as partners and equals. People are doing it in many places in different ways… Calling forth the gifts of the community to serve the world.
Jesus gave us our mandate in the Gospels: to work for justice and peace for the Kindom in our midst (K I N D O M) kinfolk, sisters and brothers on an equal playing field, not kingdom or hierarchy… but rather like Dorothy Day lived out the Kindom. Like the people here at the Dorothy Day Catholic Worker are living out the Kindom.
The Church can no longer proclaim justice in the world without living the Beatitudes – bringing forth justice within the Church.
Yes, women priests have been the elephant in the living room. And now, Father Roy has courageously stepped forward to prophetically affirm Bibbianna.
Father Roy has now brought peace and justice back to the Church…From a movement not only happening in our world community, but a movement that must happen in our Church. Conversion is changing course…It is the response to the presence of God…
Posted by Bridget Mary Meehan at 1:14 AM 2 comments: